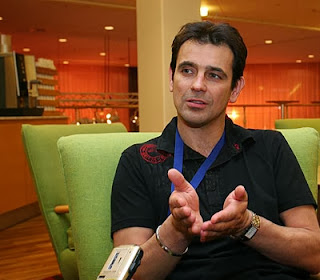 The city of Karl-Marx-Stadt (Chemnitz) in Germany is synonymous with 2 time Olympic Gold Medallist Katarina Witt, but Witt is not the only skating superstar to hail from the region. Representing East Germany, Ingo Steuer won the 1984 World Junior Championships and made 2 trips to the World Championships with his first partner Manuela Landgraf. He then teamed up with Ines Müller and made 2 trips to the European Championships. His biggest successes came when he teamed up with Mandy Wötzel in 1992. After being together for less than a year, Wötzel and Steuer won the silver medals at the 1993 European and World Championships. After an 8th place finish in the short program at the 1994 Winter Olympics in Norway, the team were forced to withdraw after a disastrous fall in the free skate that left Wötzel with stitches. Despite that disaster in Lillehammer, Wötzel and Steuer rebounded strongly to win a total of 4 German titles together in addition to the European Championships in 1995. During the 1996/1997 season, they won Skate Canada, the Nations Cup, the Cup Of Russia, the Champions Series Final, German Nationals and became World Champions! The following season, Wötzel and Steuer became Olympic Medallists, winning the bronze medal at the Nagano Games with two fabulous performances. Turning professional, they competed on the professional circuit and enjoyed great success in that avenue as well. After their skating career together ended, Steuer became a father and turned to coaching. He has coached members of each of the current top 3 pairs in the world at one point or another and has acted as coach to 4 time World Champions Aliona Savchenko and Robin Szolkowy since they teamed up in 2003. It was my pleasure to do a brief interview with Steuer. We talked about his career, professional skating and the top teams in pairs skating today:

Q: You've won both the World Junior and World titles, won the German and European titles, competed at 2 Winter Olympics (winning the bronze medal in 1998) and enjoyed success as a professional and a coach as well. Looking at your entire career from your World Junior title in 1984 until now, what would you say is the most special moment you've ever had in figure skating?

A: I had a lot of good moments in my skating life, but the best was where we win the Grand Prix Final in Canada 1996/97, because the program was perfect.


Q: Do you think you and Mandy would ever get back into performing or skating together?

A:  You have to know when you have to stop, but still I like to skate for myself.


Q: Who are your 3 favourite skaters of all time?

A: My favourites on ice were Artur Dmitriev, David Santee and Jayne Torvill and Christopher Dean.

Q: Having competed on the pro circuit in events like the World Professional Championships, World Team Championships, ESPN Championships and Ice Wars, you really got to continue to enjoy success and push yourselves as skaters as professionals. Do you think that professional skating competitions and shows will ever have a revival? Should they?

A: I hope that the pro skating will have a revival because it is good for skaters and fans!


Q: At one point or another, you've coached Aliona Savchenko, Robin Szolkowy, Tatiana Volosozhar and Eric Radford, members of all three of the world's top teams right now. What are the strengths of all three of these teams and who do you see coming out on top in Sochi if all three skate clean?

A: All are different, but all are hard workers and have the dream to win. If all skate clean in Sochi, the result will be Russia, Germany, Canada.

But WAIT... there's more! If you call within the next 30 minutes, we'll throw in this link to the blog's Facebook page, which has news, features and videos that aren't on the blog for the low, low price of free. That's right... I don't do this for PayPal donations or profit of any sort. I write this blog because I believe in great skating - artistic skating - and want to share stories about the sport's history, its amazing skaters and areas of the sport you may not know enough about with as big of an audience as I can. All you have to do is "LIKE" it: http://www.facebook.com/SkateGuard. If you get 10 friends to like, I'll throw in a big hug. And if you get 100 friends, let's just as I'm "that kind of girl".. haha. You can also follow all of the fun along on Twitter at http://twitter.com/SkateGuardBlog.
Posted by Skate Guard Blog at November 10, 2013
Email ThisBlogThis!Share to TwitterShare to FacebookShare to Pinterest
Newer Post Older Post Home
"As a rule an author has one or two popular ways of contrasting the past with the present. He can treat the past as lying in comparative doleful ignorance, or he can explain that the past was infinitely superior to the day we live in. Of course, either method is the popular journalism of the moment, and in reality there is no sharp contrast, but a gradual transition which leads the past into the present." - Joel B. Liberman, Skating Club Of New York