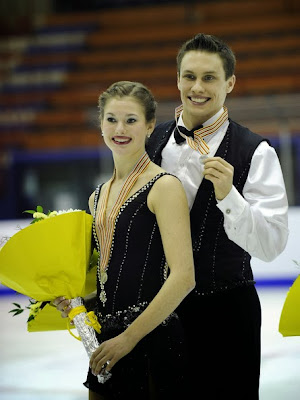 With teams like Barbara Underhill and Paul Martini, Isabelle Brasseur and Lloyd Eisler and Jamie Sale and David Pelletier being household names to Canadians everywhere, pairs skating is really a discipline that skating fans have a lot of love for in this country. 2 of the 6 pairs teams qualifying for this year's Grand Prix Final in Fukuoka, Japan are Canadian and the future of pairs skating is as bright as the present. Margaret Purdy and Michael Marinaro are two of Canadian pairs skating's bright new lights. The reigning silver medallists at the Junior World Championships, Purdy and Marinaro are a team to watch this season when it comes to the podium at Canadian Nationals. They took the time from their busy training schedule to talk about their goals this season, their partnership, travels, competing against the world's best and much, much more in this wonderful interview:

Q: You've had so much success in your skating careers already and you're both just getting started. You've won the Canadian junior title, two Junior Grand Prix events (in the U.S. and Croatia) and last season won the silver medal at the Junior World Championships in Milan, Italy. What do you think the key to your success has been and what do you believe is going to be your biggest goal and challenge this season?

A from Margaret and Mike: We have been together for seven years now so we understand and know how each other perform under pressure. We get along really well and we both have the same goals with our sport and the same work ethic. Lots of hard work and dedication we would say is the key to our success. Our biggest goal this season would be to place top 3 at Nationals with two good skates. Our biggest challenge this season was going from the Junior level up to the Senior international level. There were lots of changes with the size of crowds, media and lots of top teams.

Q: Canada is a country that's just full of pairs skating legends - Barbara Underhill and Paul Martini, Isabelle Brasseur and Lloyd Eisler, Jamie Sale and David Pelletier and countless others. Who is your favourite Canadian pairs team and why?

A from Margaret and Mike: Jamie Sale and David Pelletier would be our favourite Canadian pairs team because they are who we watched growing up.

Q: Of all of the places you've traveled so far, what was your absolute favourite?

A from Margaret and Mike: Italy was our favourite place to travel to. We had the chance to stay an extra 10 days and it was beautiful and there was fantastic food!  We also won the silver medal, so that memory will always make Italy special to us.

A from Margaret: I started dancing at the age of 3 and danced competitively.

A from Mike: I could roller blade at 14 months old.


Q: Margaret, I find it fascinating that you started your career as a hockey player and then decided to make the switch. Where did this decision come from and do you ever regret your decision?

Q: Mike, prior to teaming up with Margaret, you were paired up with Lindsi Disper. How did you and Margaret come to team up and what's one thing you enjoy the most about skating with her?

A from Mike: Margaret and I were teamed up by our coaches Alison Purkiss and Scott Rachuk. We skated together for an annual ice show at our club and then we all decided to skate the next season together. The best thing about skating with Margaret is she is very organized and always keeps us on track.

A from Mike: Appetizers would be Calamari and bruschetta. Course #1 would be any kind of pasta. Course #2: Lamb, potatoes, and asparagus. Course #3: Salad, broccoli and rapini. Dessert would be Baklava!

A from Margaret: Appetizer would be soup. The would be any sort of fish or seafood, with vegetables and sweet potatoes. Dessert? Anything chocolate!

Q: What do you consider the most challenging element in pairs skating - lifts, throws, side by side jumps, twists... or something else? How have you worked to improve your consistency on it?

Q: What has competing against top ranked senior teams in the world taught you?

A from Margaret and Mike: Competing against top ranked senior teams in the world have taught us a lot. We definitely watched the top teams at the events we went to and tried to learn as much as we could from watching them since they have been competing at the senior level for a while. We were definitely motivated from competing against them to see where we want to end up and get to in our career. It taught us to keep doing what we are doing and working hard and one day we could be that top team.

Q: What do you love the most about being out on the ice?

A from Margaret and Mike: What we love most about being out on the ice is the feeling of freedom and accomplishing something new each day. The feeling of being out there with somebody else is amazing and being able to share the achievements and even failures together as a team and becoming better each day and year.

But WAIT... there's more! If you call within the next 30 minutes, we'll throw in this link to the blog's Facebook page, which has news, features and videos that aren't on the blog for the low, low price of free. That's right... I don't do this for PayPal donations or profit of any sort. I write this blog because I believe in great skating - artistic skating - and want to share stories about the sport's history, it's amazing skaters and areas of the sport you may not know enough about with as big of an audience as I can. All you have to do is "LIKE" it: http://www.facebook.com/SkateGuard. If you get 10 friends to like, I'll throw in a big hug. And if you get 100 friends, let's just as I'm "that kind of girl".. haha. You can also follow all of the fun along on Twitter at http://twitter.com/SkateGuardBlog.
Posted by Skate Guard Blog at November 30, 2013
Email ThisBlogThis!Share to TwitterShare to FacebookShare to Pinterest
Newer Post Older Post Home