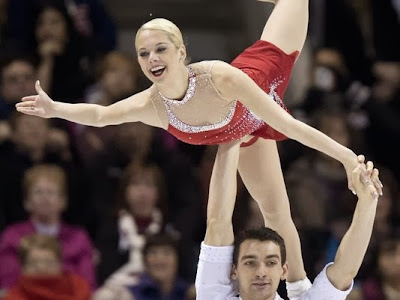 What Alexa Scimeca and Chris Knierim have accomplished in a very short amount of time is really a testament to where really, really hard work can take you in a skating career. Teaming up in April 2012, they went on to win a silver medal at the U.S. National Championships in their first season competing together. Previously, skating with Ivan Dimitrov, Scimeca's best (and only) finish at the U.S. Nationals was 10th the previous year. Knierim's best finish on the senior level was a 7th the same year, competing against his soon-to-be partner. Scimeca and Knierim's relatively short partnership has also been marred by injury, but it has certainly not stopped the dynamic and daring duo. After winning the bronze medal at the Ondrej Nepela Memorial, the Colorado based pair went on to finish in the top 6 at both of their Grand Prix assignments (China and Russia) and look towards the 2014 U.S. Nationals in Boston as very legitimate contenders to make the U.S. Olympic team. Alexa and Chris took time out of their holiday season to talk about their fast success, season to date, favourite skaters and much more in this "exclusive interview":

Q: You've only been together since April of 2012, but you've already had a ton of success, winning the U.S. silver medal last season and placing in the top 10 at your first World Championships... in your first season competing together. Did you think this level of success would come so soon and what has this success meant you both deep down?

A: Neither one of us thought this success what happen so quickly. We are forever grateful we could step onto the international scene so quickly. It has been both of our dreams to compete at Worlds. This first season together was an eye opener to what we can do in the future. It has given us courage to believe in ourselves! We are very proud of our skating.

Q: So far this season you've fared well at both of your Grand Prix assignments (Cup Of China and the Rostelecom Cup) and won a bronze medal at the Ondrej Nepela Memorial. What are you proudest of when you look at your season so far?

A: We thought our assignments this season were a little rocky, but improved each time we went out to perform. We are most proud that despite the severe injury and the shaky first two internationals, we kept pushing forward. We climbed the mountain and didn't look back. It takes a lot of mental power to rise above disappointment. We stayed strong and kept looking forward to Nationals.


Q: Speaking of U.S. Nationals in Boston, what would you say that your ultimate goals are for this event in particular and the rest of your season?

A: Our ultimate goal is to skate better than at Cup of Russia. At each competition, we focus on skating better than the last competition. That is our best way to improve on ourselves and keep focused. We hope and believe that if we skate better than we did in Russia, we will accomplish our goal of making the 2014 Olympic team! Our goal for the season is to make it as long as possible!

A from Alexa: We first met when Chris picked me up from the airport for the tryout. We had seen each other at the previous U.S. Nationals but didn't talk. I thought Chris was cute from the beginning. My first impression was that he was good looking and hopefully his skating would be the same!

A from Chris: My first impression of Alexa was that she was really outgoing and I saw a great friendship coming my way.

Q: To say pairs skating is dangerous is just a tad of an understatement. What has been your scariest moment or closest call?

A from Alexa: My biggest fear was doing the one hand lasso. For some reason I was terrified of it all the way up until the 2013 Worlds! I have finally gotten over it... It's no big deal now! haha

A from Chris: Nothing for me in pair skating scares me, but I was frightened when I broke my leg this past July. It wasn't even on a "pair" element!

A from Chris: Mint chocolate chip.

A from Alexa: Soft serve chocolate with sprinkles... or mint chocolate chip!

Q: What do you see as your biggest strengths and biggest weaknesses as a pair?

A: Our biggest weakness is the lack of time together. This is only our second season together. Our biggest strength is our genuine connection and lines on the ice. We also have very big throws and twists!

Q: Who are your favourite pairs teams of all time and why?

A: Volosozhar and Trankov and Gordeeva and Grinkov. We like these teams because they skate effortlessly and also have great extensions in their skating.


Q: Aside from technical ability, what (in your opinion) really makes a GOOD pairs team?

A: A great work ethic and a solid understanding of one another. A great pair team can set aside differences and get the job done. They work together and try to make that best training environment for one another.

Q: How do you think you'd do as ice dancers?

A from Chris: I would be really excited to try their innovative lifts!

A from Alexa: I think I would have great expression!

A from Alexa: I'm very outgoing and full of energy.

A from Chris: I'm very shy.

Q: If you had to describe yourselves in one word or phrase, what would it be and why?

A from Alexa: Sparkly.

A from Chris: Laid back.

Was this your cup of tea? Well, don't just stand there! In order for this blog to reach a wider audience, I could sure use a little help. All you have to do is "LIKE" the blog's Facebook page at http://www.facebook.com/SkateGuard for instant access to all of the new blog articles, features and interviews as they are made available. I also share daily updates and headlines from the skating world, videos and much more that's not here on the blog, so if you love figure skating as much I do, it would really be rude not to get on that inside edge! You can also follow all of the fun along on Twitter at http://twitter.com/SkateGuardBlog. If you know someone who loves skating, tell them! It's all about getting a dialogue going on! Fabulous skating is too fabulous to keep secret. Am I right or am I right?
Posted by Skate Guard Blog at December 28, 2013
Email ThisBlogThis!Share to TwitterShare to FacebookShare to Pinterest
Newer Post Older Post Home