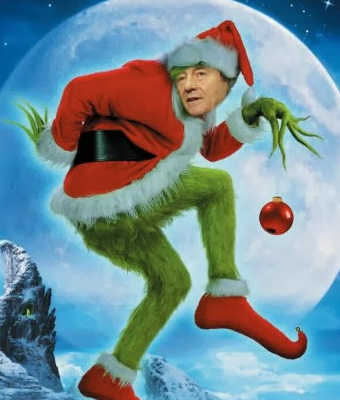 Since taking over the presidency of the ISU in 1994 from Norway's Olaf Poulsen, Italy's Ottavio Cinquanta has ruled "amateur" figure skating's governing body with an iron fist for almost fifteen years, implementing the IJS judging system that has turned figure skaters into clones. He allowed "The French judge" Marie-Reine Le Gougne back into the sport's good graces following the 2002 Salt Lake City scandal, illegally extended his own term by another 2 years (breaking the ISU's constitution) and even ignored petitions (plural) signed by millions of figure skating fans addressing concern after concern about the sport's governance and judging system. But, you know, it's the holiday season, and everyone deserves a little holiday cheer (in the style of Dr. Suess), even Mr. Grinch - I mean, Mr. Cinq...

"You're a mean one, Mr. Cinq.
You really are a sleaze.
You won't give up on IJS
Even though it's ruining the sport,
Mr. Cinq!
I wouldn't given your spin on things a level one.

You're a monster, Mr. Cinq.
You let Le Gougne back in the sport.
She would have been France's President
If not for thirty seven votes,
Mr. Cinq!
I wouldn't touch you with a
Thirty-nine and a half foot Skate Guard.

You're a vile one, Mr. Cinq.
ISU's constitution was broken for you.
Resolution No. 7 broke your very own rules,
Mr. Cinq!
Given the choice between you and Gailhaguet,
I'd rather a seasick Sally Stapleford.

You're a foul one, Mr. Cinq.
Every complaint just gets ignored.
From Yuna Kim in Sochi
to Denis Ten in 2013,
Mr. Cinq.

The three best words that best describe you,
Are as follows, and I quote
"Stink!
Stank!
Stunk!"

You're a rotter, Mr Cinq.
Where's your objective eye?
The mess that you've created
is staring you in the face,
Mr. Cinq.

IJS is an appalling dump heap
Overflowing with the most disgraceful
Assortment of deplorable ways to make skaters skate imaginable,
Mangled up in tangled up rules!

You nauseate me, Mr Cinq.
Please retire now!
Let someone else do it
Who isn't going to screw it,
Mr. Cinq.

You're a three-decker Salchow
And sardine sandwich,
With flutzy sauce!

Was this your cup of tea? Well, don't just stand there! In order for this blog to reach a wider audience, I could sure use a little help. All you have to do is "LIKE" the blog's Facebook page at http://www.facebook.com/SkateGuard for instant access to all of the new blog articles, features and interviews as they are made available. I also share daily updates and headlines from the skating world, videos and much more that's not here on the blog, so if you love figure skating as much I do, it would really be rude not to get on that inside edge! You can also follow all of the fun along on Twitter at http://twitter.com/SkateGuardBlog. If you know someone who loves skating, tell them! It's all about getting a dialogue going on! Fabulous skating is too fabulous to keep secret. Am I right or am I right?
Posted by Skate Guard Blog at December 16, 2013
Email ThisBlogThis!Share to TwitterShare to FacebookShare to Pinterest
Newer Post Older Post Home
"As a rule an author has one or two popular ways of contrasting the past with the present. He can treat the past as lying in comparative doleful ignorance, or he can explain that the past was infinitely superior to the day we live in. Of course, either method is the popular journalism of the moment, and in reality there is no sharp contrast, but a gradual transition which leads the past into the present." - Joel B. Liberman, Skating Club Of New York