Hanni Sondheimer Vogelweid, The Skates That Survived The Holocaust And The Sochi Olympics 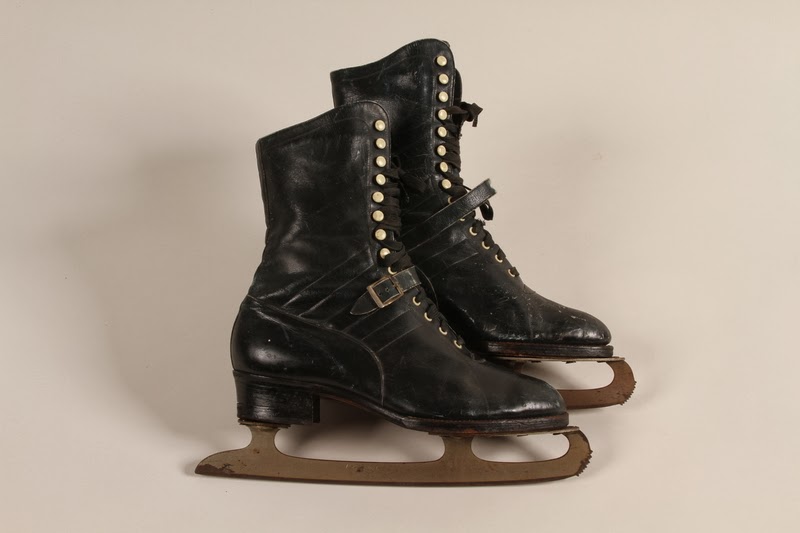 In a sea of black, grey and white, one girl in a red coat. That iconic visual and moment depicted in "Schindler's List" that stays in our mind forever.

Born on October 5, 1923, in Berlin, Germany, 17 year old Hanni Sondheimer Vogelweid was living in Lithuania when World War II broke out and fled with her parents Moritz and Setty and her 14 year old brother Karl to Japan in an attempt to escape the 1940 Soviet occupation of Kaunus and eventually emigrate to the U.S. where her family had relatives. Her grandmother and great aunt's family weren't so fortunate. They ended up being in a work camp. Her voyage from Kaunus, Lithuania ended up being unsuccesful due to visa restrictions and Hanni and her family were forced to move to China, as they became officially stateless after leaving Lithuania. She journeyed from Kaunus, Lithuania to Shanghai, China with only a few personal belongings: a picture of Gary Cooper, a pair of red shoes and her leather lace-up figure skates.

From 1941 to 1946, Hanni and her family were forced to live and be interned in the Hongkew (Hongkou Qu) ghetto of Shanghai with other Jewish refugees. In 1946, Hanni married a U.S. soldier and safely emigrated from China to the U.S. and she arrived with the pair of figure skates that survived that harrowing trip from Lithuania to Japan to China to the U.S. "I couldn't bring much," explained Hanni in a narrative on file with the United States Holocaust Memorial Museum in Washington, D.C., where the skates and a collection of Hanni and her family's belongings are among the materials. "I loved ice skating and I could take my ice skates because I thought in America you can ice skate." Hanni's family arrived in the U.S. the following year.

The skates sit in the United States Holocaust Memorial Museum in Washington, D.C., serving as a haunting reminder of the life of one teenager who survived anti-Semitism in the German school she attended in Kaunus, a nerve-wracking trip via the Trans-Siberian Railroad, ship to Tsuruga, Japan, extreme poverty and near-starvation in Shanghai and a cross Pacific voyage from China to Comanche, Iowa, skates in tow. If that's not the definition of survivor I don't know what is.

Just four years before Hanni and her family had fled Lithuania, Sonja Henie was performing an exhibition at the Sportpalast in Berlin, one of her favourite rinks. Unexpectedly one evening, Hitler himself, Goring, Goebbels and other Nazis came to the Sportpalast to see her perform. When Sonja was told of Hitler's attendance, she found out where he was seated and skated full speed towards him, stopped right in front of him, gave the Nazi salute and in a loud voice shouted "Heil Hitler!" to thunderous applause and a blown kiss from the man who was responsible for the deaths of approximately 60,000,000 to 85,000,000 people worldwide during World War II. Despite claiming "I don't even know what a Nazi is" Sonja remained good friends with Hitler until his troops invaded Norway and again sported that salute at the 1936 Olympics in Germany.

We say that the Olympics aren't a place to get political. They sure were in 1936 and it's horrific to think that the most famous skater of Hanni's time was someone who publicly showed support of the Nazi regime... in Hanni's own country of birth. Albert Einstein once said that "peace cannot be kept by force; it can only be achieved by understanding." That's really it. The Olympic Games are all about bringing nations and people together to do something positive together. It's a lot like going to a family or work event where you may not get along with everyone 365 days a year but you say hey, we're going to do something positive together damn it. In that long ago time, one skater won 3 Olympic gold medals and publicly supported Hitler and another ran for her life with her skates. Both of these ice loving ladies aren't with us anymore but I think there's still an important message in that connection. In 1936, Hitler used the Olympics as a platform to spread hate, bigotry and sneer in the face of human rights. The same thing is going on again in Russia right now, less than a hundred years later. I'm sure the next generation of skating fans would hate to be hearing the story of another Olympics taking place in the midst of hate and of a young GLBT skater fleeing Russia with HIS or HER skates just to survive. In Nigeria right now, a man received 20 lashes after an Islamic court in Bauchi convicted him of "homosexual offences". We've all seen the video of the Russian teenager splashed with urine by his peers who supported Putin's anti-gay law - which is also supported by none other than Public Chamber Of Russia member and 3 time Olympic Gold Medallist Irina Rodnina as well. I don't know about you, but in Canada we have this thing called human rights. I couldn't have more pride in Barack Obama for his decision to send openly gay athletes to Sochi as a peaceful reminder of human rights and in U.S. Figure Skating, Ashley Wagner and Jeremy Abbott for all of their recent statements in support of human rights. I'll even hand it to our Conservative Prime Minister Stephen Harper, who like Obama will not be attending the Sochi Games. Canadian Foreign Affairs Minister John Baird said in the summer: "This mean-spirited and hateful law will affect all Russians 365 days of the year, every year. It is an incitement to intolerance, which breeds hate. And intolerance and hate breed violence."

As skating fans and human beings, we owe a little more to people like Hanni Sondheimer Vogelweid. With Sochi fast approaching, it's happening. There's not a boycott. The Olympics aren't moving. They're happening where they are whether we like it or not. My only hope is that people will continue to open their mouths and do so at the Games too. These are basic human rights we're talking about here. We wouldn't have gone to a KKK meeting and be "respectful of the host's beliefs" so as not to rock the boat, and I hope the people attending the Sochi Games aren't ruled by fear of their environment. This is the perfect time TO get a message across. If not then, when?

Skate Guard is a blog dedicated to preserving the rich, colourful and fascinating history of figure skating and archives hundreds of compelling features and interviews in a searchable format for readers worldwide. Though there never has been nor will there be a charge for access to these resources, you taking the time to 'like' on the blog's Facebook page at http://www.facebook.com/SkateGuard would be so very much appreciated. Already 'liking'? Consider sharing this feature for others via social media. It would make all the difference in the blog reaching a wider audience. Have a question or comment regarding anything you have read here or have a suggestion for a topic related to figure skating history you would like to see covered? I'd love to hear from you! Learn the many ways you can reach out at http://skateguard1.blogspot.ca/p/contact.html.
Posted by Skate Guard Blog at January 18, 2014
Email ThisBlogThis!Share to TwitterShare to FacebookShare to Pinterest
Newer Post Older Post Home