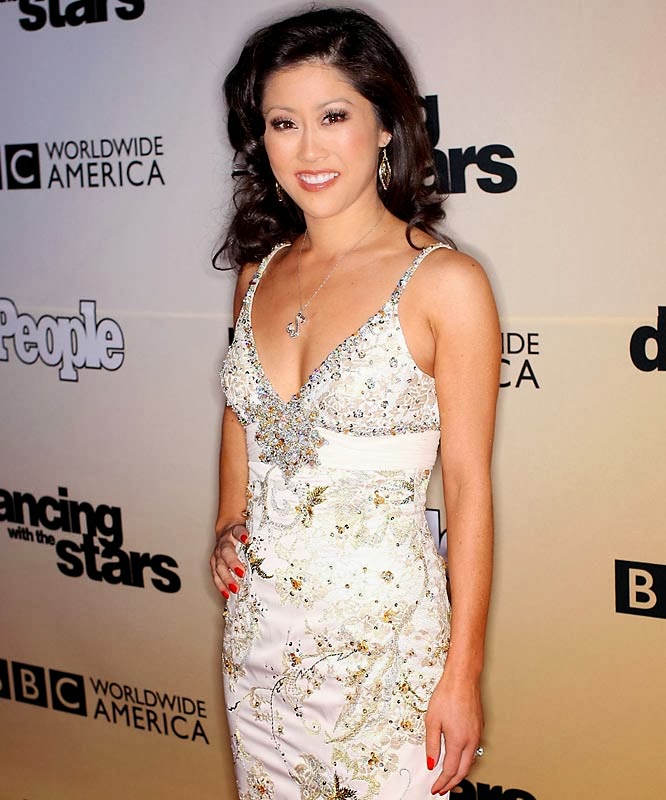 The true mark of a skater's success is when their name can transcend fame within the figure skating community and become a household name. Whether you're a figure skating fan or not, chances are you've not only seen Kristi Yamaguchi skate but seen her skate many times and loved EVERY MINUTE OF IT. Her career is one for the record books: 3 U.S. titles (both in singles and pairs), 2 World Junior titles (both in singles and pairs), 2 consecutive World titles in 1991 and 1992, the gold medal at the 1992 Winter Olympic Games, every professional title known to mankind basically, the mirror ball trophy as the winner of Dancing With The Stars, year upon year upon year starring in Stars On Ice... The fact of the matter is that rhyming off Kristi Yamaguchi's titles and accomplishments really doesn't do her justice. The reason that Kristi won those World titles, the Olympic gold medal and became known as one of the greatest ladies skaters of all time is because she is an AMAZING skater. Consistent, persistent, able to interpret any kind of music and entertain an audience and sell just about any kind of program and keep audiences in the palm of her hand, Kristi proved over the years not only her amazing talent as a technical skater but her gift as a performer and entertainer. I spoke with her just as she was about to leave for Sochi. Kristi took the time to speak to me about her competitive career, family, Dancing With The Stars, Midori Ito, if she'd ever skate again and much, more more in this interview I hope you'll love as much as I did:

Q: To say that your competitive career as as a skater was just amazing is really the understatement of the century. Three U.S. titles (2 in pairs with Rudy Galindo and 1 in singles), the Goodwill Games, Skate America, the World Junior title in both pairs and singles, 2 World titles, the gold medal at the 1992 Winter Olympic Games in Albertville, and then your professional career with win after win at events like the World Professional Championships, Challenge Of Champions, Ice Wars, the U.S. Professional Championships and so many other events. If you had to pick just one, what was the most special moment of them all?

A: Each one has a special meaning to me for one reason or another. Honestly, the Olympic title was the the experience and pinnacle of my life though.


Q: You were SO amazing on Dancing With The Stars with Mark Ballas. In winning your pairs titles with Rudy Galindo and in skating pairs on Stars On Ice, you obviously showed what a gifted pairs skater you are. How do you think you would have done as an ice dancer?

A: You know, during the Dancing With The Stars experience I was kicking myself for not paying more attention to ice dance. There is such a learning curve when it comes to dance styles, rhythms and rules. Dancing With The Stars was fun! I gained a whole other level of appreciation for ice dance. I remember thinking at the time... maybe I would try it, not to compete but just to have that experience. I have my gold tests in figures, free skating and pairs. The only gold test I don't have is in ice dance. I had always thought that maybe that was something I'd work on.


Q: As you head to Sochi, I want to talk to you about the current state of ladies skating. Who are the ladies to watch in Sochi? Who are people underestimating?

A: I think the main contenders are Yuna Kim from South Korea and Mao Asada from Japan. Gracie Gold,
I think, is also a medal contender. I think Julia Lipnitskaia and Ashley Wagner of course too. Those are the five fighting. I think as for someone people are underestimating, it could be our young skater Polina Edmunds, who has a chance to be top five. She is absolutely unproven in senior internationals but definitely has a chance to be up there in top five. Also, Carolina Kostner. She's had a rough season so far but could also be up there if she skates well.


Q: Being in the public eye and being a mother, is it difficult to carve out private time with your family?

A: No, not at all. We live in a small town and you know, the schedule and the kids activities are pretty much the priority. We live a relatively normal life other than when I have to travel. There's no paparazzi or anything!


Q: You and Midori Ito were such rivals during your competitive days. What was your relationship like off the ice and do you ever speak today?

A: I haven't spoken to Midori in years. I really haven't seen her in fifteen plus years. I think it was definitely
a matter of a mutual respect for each other when we were competing even though we were rivals. There was a huge language barrier. She didn't speak English and I didn't speak Japanese. Communication was mostly "hi, how are you? How are things?". It was very much pleasantries. She was always very respectful and I always admired her, though. We pushed each other to be better.

A: People think athletes are so healthy all the time. I do indulge in junk food once in a while.


Q: Will we ever see you back on the ice performing in shows or touring with Stars On Ice again?

A: It's probably unlikely. I did officially retire but who knows? My life is with my daughters and I don't think you'd see it in the near future. I guess you can never say never.

Didn't you just love this interview with Kristi? How about the answer to the last question? Well, don't just stand there! In order for this blog to reach a wider audience, I could sure use a little help. All you have to do is "LIKE" the blog's Facebook page at http://www.facebook.com/SkateGuard for instant access to all of the new blog articles, features and interviews as they are made available. I also share daily updates and headlines from the skating world, videos and much more that's not here on the blog, so if you love figure skating as much I do, it would really be rude not to get on that inside edge! You can also follow all of the fun along on Twitter at http://twitter.com/SkateGuardBlog. If you know someone who loves skating, tell them! It's all about getting a dialogue going on! Fabulous skating is too fabulous to keep secret. Am I right or am I right?
Posted by Skate Guard Blog at February 18, 2014
Email ThisBlogThis!Share to TwitterShare to FacebookShare to Pinterest
Newer Post Older Post Home