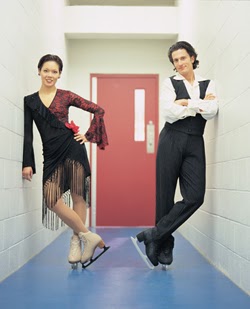 If you were as blown away by Meagan Duhamel and Eric Radford's flawless short program in the Sochi team event as I was, chances are you're in the mood to cheer on Team Canada. Speaking of cheering, if you're Canadian and didn't spend years cheering on Megan Wing and Aaron Lowe, you're losing your skating fan privileges and being sent somewhere cold and unforgiving, like Whitehorse, Yellowknife or Sarah Palin's house (you know... the one she can see Sochi, Russia from!) For two decades, Megan Wing and Aaron Lowe's competitive skating career was the talk of ice dancing in Canada and their dedication and infectious love of the sport was contagious. They won an INSANE 10 consecutive medals in Senior Ice Dance at the Canadian Figure Skating Championships from 1997-2006 and represented Canada proudly at 5 World Championships, the 2006 Winter Olympic Games in Torino, Italy and countless international competitions. Their programs were a privilege to watch, their energy and personality just shining through in every lift, twizzle, counter and rocker they carved out on the frozen stage. Today, they remain together on and off the ice as parents and two of Canada's busiest and most sought after ice dance coaches based out of British Columbia. In this interview, Megan and Aaron took the time to reflect on their amazing career, their loves and passion for the sport. You're going to love it!:

Q: You teamed up in 1986 and had one of the longest ice dancing careers probably in Canadian history, skating as a team for 20 years in the "amateur" ranks. What was the secret to it - the motivation to keep pushing forward?

A from Aaron: When I was 12, my Mom was exasperated with me quitting activities and she said "you're a quitter, you always quit everything".  That really got under my skin and ever since, I don't like giving up.

A from Megan: There were so many perks along the way… travelling, making new friends, meeting my idols and of course performing.  That made pushing through the hard times easier.

Q: You won ten consecutive Senior Ice Dance medals at the Canadian Championships from 1996 to 2006, won 2 medals at the Four Continents Championships, represented Canada at countless international competitions, 5 World Championships and the 2006 Winter Olympic Games in Torino, Italy. Looking back, what were your proudest moments or most special memories and what were the biggest challenges?

A: Our proudest moment was making the Olympic team after being alternates twice. Walking in the Opening Ceremonies at the Games was so inspiring and justifying. The hardest moments were dealing with injuries and being alternates for 2 Olympics and 6 World Championships.

Q: As a skater and a fan, I grew up cheering you on and my two favourite programs of yours were your "Ameno" and "Underground" programs. Where did you come with the concepts and choreography for these two particular free dances?

A: For "Underground", we had that music for a few years and were waiting for the right time to use it.  We moved to train with Igor Shpilband in Detroit and he loved the music when we showed it to him.  For "Ameno", we wanted to try something different for us, something darker.  We always wanted to avoid becoming stagnant.  We looked for ways to expand our repertoire of styles.

Q: What was the transition of going from the competitive to coaching ranks like and did you ever you think you would be as successful as coaches as you were as students?

A: The transition from competing to coaching was quite a smooth one. Through most of our competitive years we also coached part time and conducted seminars. So when we retired from competition, we coached part time, performed in shows and did choreography while we finished our Masters degrees. In the spring of 2007, we moved back to our home town, Vancouver, and started coaching full time assisting Joanne McLeod and trying to build up a dance school. It's taken a whole lot of work but we were able to develop our dance school and produce many national and international ice dance medallists. Our goal is to make the Vancouver Ice Dance Academy (VIDA) one of the top places to train in the world and for our dancers to become the best they can be.

Q: Who are your three favourite skaters (or teams) and why?

A: Grishuk and Platov for their speed and attack, Maya Usova and Alexander Zhulin for their technical ability and lines and Tessa and Scott for their connection on the ice and smoothness.

A: People don't know that we almost stopped skating together at thirteen and fourteen yers of age when Aaron had to decide between tennis and figure skating.

Q: Do you ever miss the performance aspect of skating or are you happy on the other side of the boards?

A: Neither of us miss performing because we get that outlet by choreographing.  With multiple teams, we get to 'perform' so many programs each year.

Q: What do you love more than anything about ice dancing?

A: The best thing about ice dancing is the ability to tell a story and when the magic is there you can get lost in the story and bring the audience right along with you.  It's a great feeling.

Did you love this interview with Megan and Aaron as much as I did? Well, don't just stand there! In order for this blog to reach a wider audience, I could sure use a little help. All you have to do is "LIKE" the blog's Facebook page at http://www.facebook.com/SkateGuard for instant access to all of the new blog articles, features and interviews as they are made available. I also share daily updates and headlines from the skating world, videos and much more that's not here on the blog, so if you love figure skating as much I do, it would really be rude not to get on that inside edge! You can also follow all of the fun along on Twitter at http://twitter.com/SkateGuardBlog. If you know someone who loves skating, tell them! It's all about getting a dialogue going on! Fabulous skating is too fabulous to keep secret. Am I right or am I right?
Posted by Skate Guard Blog at February 06, 2014
Email ThisBlogThis!Share to TwitterShare to FacebookShare to Pinterest
Newer Post Older Post Home
"As a rule an author has one or two popular ways of contrasting the past with the present. He can treat the past as lying in comparative doleful ignorance, or he can explain that the past was infinitely superior to the day we live in. Of course, either method is the popular journalism of the moment, and in reality there is no sharp contrast, but a gradual transition which leads the past into the present." - Joel B. Liberman, Skating Club Of New York