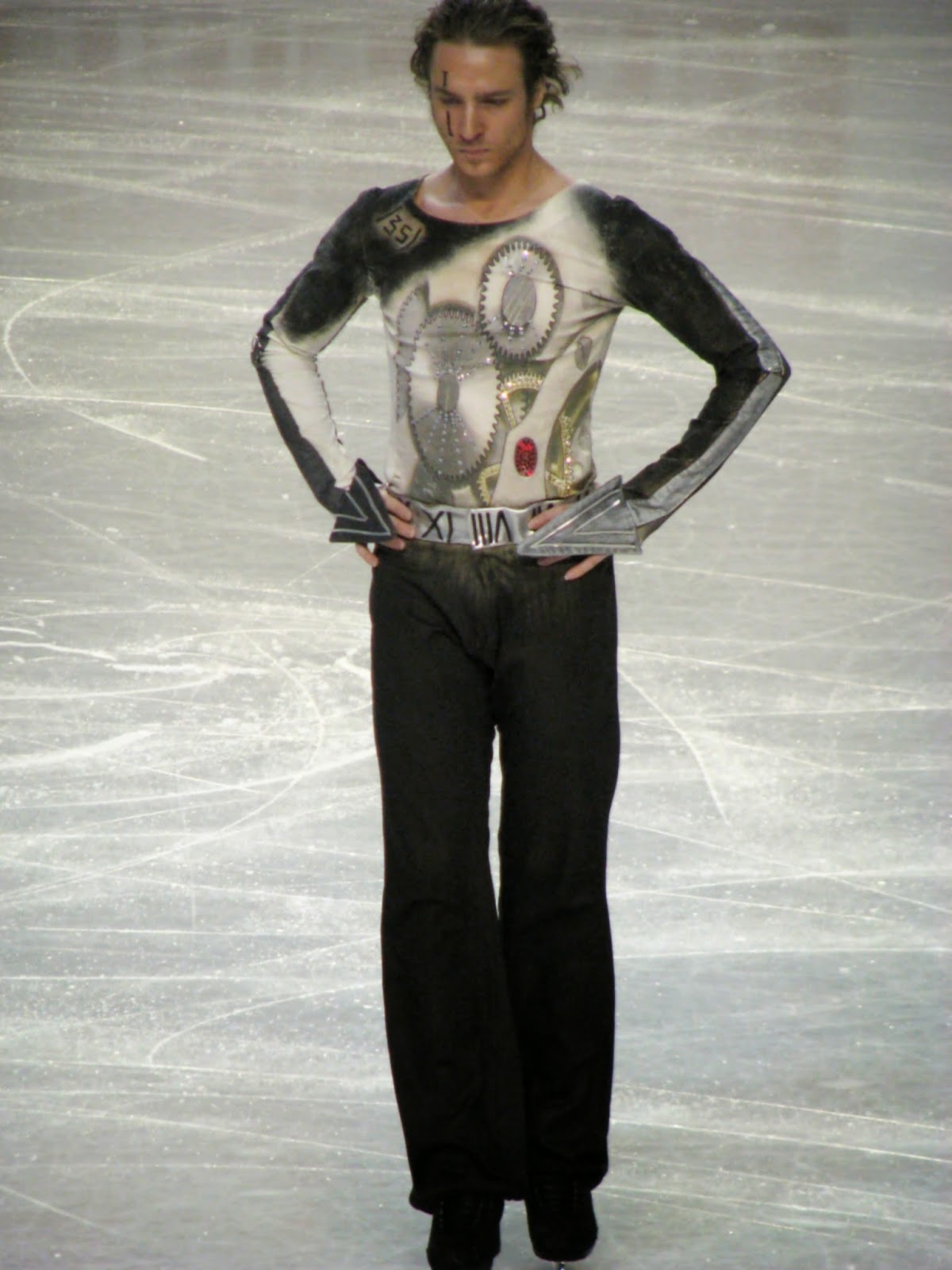 I'll make no bones about it. France's Nathalie Péchalat and Fabian Bourzat are one of my absolute favourite ice dance teams in recent memory. There's such conviction, imagination and complexity to their work. In a lot of ways, they've taken things from other French ice dance greats - teams like the Duchesnay's, Anissina and Peizerat and Delobel and Schoenfelder - and built upon those great exploratory choreographic styles, creative lifts and footwork sequences and brought that to to the now. The fact that they've decided to retire from "amateur" competition leaves me more than a little sad. That said, 'as they say' all good things must come to an end and Nathalie and Fabian's career has most certainly been chock-full of the stuff dreams are made of. Teaming up in 2000, their more than a decade long career saw them win two junior and five senior French ice dance titles, seventeen medals (five of them gold) at Grand Prix events, five consecutive medals at the ISU Grand Prix Final, two European titles, two World medals and three trips to the Winter Olympic Games. Finishing just off the podium in fourth place with a magical free dance that I certainly feel deserved them a medal at the Sochi Winter Olympics in February, I really feel Nathalie and Fabian proved time and time again throughout their career that they earned their spot in the history books among ice dance's elite. It was my pleasure to catch up with Fabian around the end of May to speak with him about everything from his competitive career, his future, his opinion on the criticism that he and Nathalie received for going to perform in North Korea, the iconic free dance to "The Mummy" and so much more in this must read interview.

Q: Fabian, thank you so much for agreeing to do this. You're fantastic! To say you and Nathalie's competitive career has been incredible is really the understatement of the century. You've won two medals at the World Championships, two European titles, competed at three consecutive Olympic Games and have won five French titles, five medals at the Grand Prix Final and thirteen other Grand Prix medals. Looking back on your competitive career, what would you have to say are your proudest moments and most special memories?

A: There are just so many moments but I would say our first time qualifying for the Olympics, our first European title, moving to Zhulin and Igor and the response of the audiences in Nice and Saitama during our free dances have stood out the most.


Q: Over the years, you have worked with a who's who of ice dancing: Igor Shpilband, Angelika Krylova, Pasquale Camerlengo, Alexander Zhulin and Muriel Boucher-Zazoui among them. Looking back on your whole journey and experiences working with so many talented coaches and choreographers, why was Igor Shpilband ultimately the coach for you and Nathalie?

A: Well, we've learned from the best as you said but Igor was the last touch to our skating skills and he and his team brought back the envy of skating. As we trained for so long, the passion faded and we got it back in the last eight months of our career.


Q: I'm not going to sugar coat things. I have always been a HUGE fan of you and Nathalie and in my opinion, both your Fosse short dance and "Le Petit Prince" free dance this year were nothing short of brilliant. If we're talking about a performance making you FEEL something and having the whole package, I really feel that you both deserved Olympic medals and a World title this season. Having had time to digest and process it all, how do you feel about Olympics and Worlds?

A: We did what we had to do. We were dedicated in practice and happy to compete each time. We did the job by delivering strong performances and if we didn't get rewarded so be it.

Q: You indicated prior to Worlds in Saitama that you planned to retire from competition and pursue coaching with Shpilband. Is that still the plan and do you and Nathalie plan on continuing to perform together in professional shows and tours in the future?

A: Of course! We actually just performed in Denis Ten's show then we are off to Japan for Fantasy On Ice beginning of June and again at the beginning of July. The rest of it is still ongoing.


Q: I loved your "Mummy and Pharoah" program. You started off skating a "Mummy" exhibition piece in 2007 and it later developed into a competitive program for you during the 2011/2012 season that won you a European title and your first medal at Worlds after three consecutive top five finishes in the years leading up those 2012 Worlds in Nice. Where did the inspiration for the "Mummy" theme come from and who decided to translate it into a free dance?

A: It has been a long time since anyone explored Egypt in figure skating so we decided to go for it, plus I really loved the second part of the exhibition to Martin Solveig. We both thought of it as a program that could be a good free dance because in exhibition you don't go as far in research as for a competitive program. We already worked with Kader Belmokhtar on the exhibition and it was a pleasure to work again with him that season.

A: (laughing) Maybe that I might be smart actually!


Q: In 2011, you and Nathalie got criticized in the New York Times for performing in North Korea along with several other skaters. You responded by saying "traveling there was not a political act at all. We came as open-minded people, who wanted to discover and exchange." What did you take from this rare experience of going behind those 'closed walls' and what did you learn about figure skating in North Korea?

A: First of all, it was not the first time we had performed there and we were able to witness the way the country has evolved. It's so annoying to me that people criticized that choice because what a leader is doing in a country such as North Korea shouldn't impact or prevent the citizens from opening up to different aspects of the world. We are sportsmen and artists above all and we don't pay attention to narrow minded people like that. We brought music they've never heard, daring costumes and we gave them a peak at what's going on somewhere else. We were able to convince the North Korean Figure Skating Federation to send their sportsmen abroad with the help of other skaters... which happened in Nice.

Q: You've competed against the some of the best of the best since 2000 - Tessa Virtue and Scott Moir, Meryl Davis and Charlie White, Marie-France Dubreuil and Patrice Lauzon, Tatiana Navka and Roman Kostomarov, Margarita Drobiazko and Povilas Vanagas, Isabelle Delobel and Olivier Schoenfelder, Albena Denkova and Maxim Staviski and so many other great teams. Aside from yourselves, who are the nicest people you've competed against? The most fun? The most fiercely competitive?

A: Well, we spent quite some time these past six years with Virtue and Moir and Davis and White and we always have fun moments around each other. The nicest ones are definitely Patrice and Marie-France. We trained with them and they exchanged a lot with us in our beginnings as a team. The most fiercely competitive one? I have no clue, probably our elders but were not that close to them.


Q: If you were stranded on a desert island and could only bring three things with you, what would they be?

A: One girl, some music and a boat to escape!

A: Isabelle and Paul Duchesnay and Jayne Torvill and Christopher Dean for what they brought to ice dance.

Q: What's the biggest lesson that figure skating has taught you as a person?

A: Discipline is the most important but also being able to overcome everything.

Skate Guard is a blog dedicated to preserving the rich, colourful and fascinating history of figure skating and archives hundreds of compelling features and interviews in a searchable format for readers worldwide. Though there never has been nor will there be a charge for access to these resources, you taking the time to 'like' on the blog's Facebook page at http://www.facebook.com/SkateGuard would be so very much appreciated. Already 'liking'? Consider sharing this feature for others via social media. It would make all the difference in the blog reaching a wider audience. Have a question or comment regarding anything you have read here or have a suggestion for a topic related to figure skating history you would like to see covered? I'd love to hear from you! Learn the many ways you can reach out at http://skateguard1.blogspot.ca/p/contact.html.
Posted by Skate Guard Blog at June 19, 2014
Email ThisBlogThis!Share to TwitterShare to FacebookShare to Pinterest
Newer Post Older Post Home