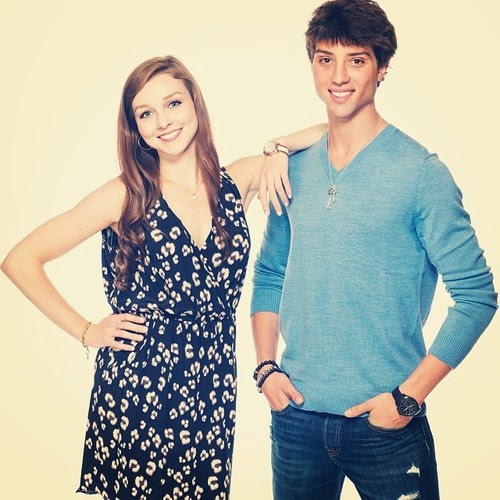 Teaming up after a tryout in Barrie, Ontario in February 2009, Ontario born Alexandra Paul and Mitchell Islam incredibly won the Canadian Junior ice dance title and the silver medal at the World Junior Championships in their first season competing together. Winning the bronze medal the following season on the senior level at Nationals, Alex and Mitch dropped to fifth at the Nationals the next year. Making a change and moving to Detroit to train with Pasquale Camerlengo and Olympic Silver Medallist Angelika Krylova paid off in dividends. This past season, their skating improved by leaps and bounds and the dazzling duo of twenty-something's regained their spot on the podium at Canadian Nationals and earned spots on Canada's 2014 Olympic and World teams, finishing in the top ten at their first World Championships as a team. This WONDERFUL ice dance team took the time out of their training schedule to talk to me about their training, debut at Olympics and Worlds, focuses going forward, favourite skaters and much more in this interview you'll just love:

Q: You've won the Canadian junior title and two senior medals at the Canadian Figure Skating Championships, medals internationally at the World Junior Championships and Nebelhorn Trophy and have represented Canada at both junior and senior Grand Prix events and at the Four Continents Championships, World Championships and the Winter Olympic Games. Looking back at your skating career so far, what are your proudest memories or most special moments so far?

A: Our World Junior silver medal will always be near the top of our list. We had barely been together a year and the work we put in in such a short time to get to that level is something we're both very proud of. This season, qualifying for the Olympics is something we'll never forget. It was like a weight had been lifted off of our shoulders. The sacrifices we've both made over our careers were all worth it; it was a dream come true. Finally, earning a top ten finish at our first World Championships last month in Japan has certainly become a highlight.


Q: You train with two of the best ice dance coaches and choreographers in the business, Pasquale Camerlengo and World Champion Angelika Krylova. What makes them great coaches, choreographers and people?

A from Mitch: Pasquale and Angelika are a perfect team. As people and as coaches they complement one another so well. Pasquale is a creator and Angelika a trainer. What makes things work at Detroit Skating Club is that we're all a big family; we all care about one another and that starts from the top.

A from Alex: Our coaches complement each other so well. Pasquale is the one who imagines the programs and sees a vision in his head, Angelika pushes us to our limits each and every day. We also have an amazing technical coach Natalia (Annenko) Deller. She teaches some of the best basics in the world.

Q: You both balanced elite skating careers with post-secondary educations at Laurentian University. How do you find the time and what do you take from skating that makes you better students and vice versa?

A from Mitch: We're actually now taking classes at Oakland University in Rochester Hills, Michigan. I'm majoring in Political Science and minoring in Journalism. For me, balancing school and skating is something I've done for so long that I've gotten pretty good at it. Pursuing both sport and academics has taught me how to time manage effectively and shown me the benefits of being proactive and well prepared.

A from Alex: Being able to attend classes has been so beneficial for me. It has been such a great balance between the athlete life and a 'normal' life. I'm currently majoring in Political Science and minoring in Philosophy. Going to school while I'm still skating has really taught me how to balance my time and make sure I stay on top of all the things in need to get done.


Q: What have you learned most from competing internationally and what has been the strangest or most interesting thing you've seen in your travels worldwide?

A from Alex: It is so amazing being able to travel around the world, seeing new places and meeting new people all while competing for Canada. The most interesting things I've seen in my travels are the streets of Tokyo. The signs and pictures all over the buildings with all the lights and the huge crowds of people walking through the streets everyday was so amazing to see.

A from Mitch: I feel very fortunate to continue to have the opportunity to travel around the world to compete. Being able to briefly experience various cultures through my travels has been incredible. The strangest thing would have to be being taken from the arena to the hotel in Istanbul in a taxi whose driver thought it would be fun to race the driver of another taxi which had Alex and her family aboard. We were racing down Turkish side streets doing well over 100 km per hour!

Q: If you could only eat one food for the rest of your lives, what would you eat?

A from Alex: Sushi!

A from Mitch: Sushi!


Q: Mmm... Now I want sushi! What's one thing most people don't know about you?

A from Mitch: I like to play video games.

A from Alex: I love to cook but I hate baking.

A: The two of us share the same 3 favourite skaters. Marie-France and Patrice: We loved their skating. They were smooth and powerful and he was the perfect frame for her. A couple of their free dance performances at Nationals stand out as the most amazing performances either of us have seen live. Jeff Buttle: Jeff has always been an idol because he was the first elite skater we got to see on a daily basis, training in Barrie at Mariposa. Jeff helped both of us realize the work and sacrifice that goes into making it to the top. His artistry is without compare. Tessa and Scott: We feel fortunate to have had the chance to compete with these two. They are one of the greatest ice dance teams of all time and what we've learned just from watching them skate is invaluable. They have certainly become mentors and friends.

Q: You made a big jump from Olympics to Worlds in placing in the top ten, which was SO deserved by the way! What were your main focuses in training between Olympics and Worlds and what areas will be your main focus going forward?

A from Mitch: I think we were overwhelmed in Sochi. With all the distraction that comes with the Olympics, I think we lost focus a bit. We lost sight of what we were there to do, which was just to do our jobs. We were too cautious in Sochi and it cost us. The few weeks between the Games and Worlds, we definitely had a bit of a chip on our shoulder. We knew we'd underachieved in Russia and we were eager to show the world what we could really do in Japan.

A from Alex: Going forward, our main focus will be continuing to progress in the way we train. We have to learn to attack our elements more and look fearless when we compete. We want to make ourselves look more mature and more like we belong in that 'last warm up group'.

In order for this blog to reach a wider audience, I could really use a little help. "LIKE" the blog's Facebook page at http://www.facebook.com/SkateGuard for instant access to all of the new blog articles, features and interviews as they are made available and tell your friends about it too! I also share daily updates and headlines from the skating world, videos and much more that's not here on the blog, so if you love figure skating as much I do, it would really be rude not to get on that inside edge! You can also follow all of the fun along on Twitter at http://twitter.com/SkateGuardBlog. It's all about getting a dialogue going on! Fabulous skating is too fabulous to keep secret.
Posted by Skate Guard Blog at July 19, 2014
Email ThisBlogThis!Share to TwitterShare to FacebookShare to Pinterest
Newer Post Older Post Home
"As a rule an author has one or two popular ways of contrasting the past with the present. He can treat the past as lying in comparative doleful ignorance, or he can explain that the past was infinitely superior to the day we live in. Of course, either method is the popular journalism of the moment, and in reality there is no sharp contrast, but a gradual transition which leads the past into the present." - Joel B. Liberman, Skating Club Of New York