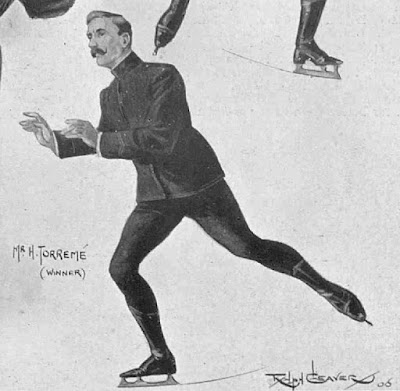 Long, long before the Jamaican bobsled team earned international fame with their debut in Olympic competition in Calgary in 1988 and inspired the movie 'Cool Runnings', an Olympic athlete from a country you'd never really associate with winter sports did just the same... only at the Summer Olympic Games and as a figure skater.

Born in Rio de Janeiro, Brazil in 1861 to an Argentine father and a Brazilian mother, Horatio Tertuliano Torromé emigrated to Great Britain during the Victorian era with his family, married in 1886 and soon thereafter took up figure skating. In 1902, he almost won a medal at the World Figure Skating Championships in London, England, but dropped from a third place finish in compulsory figures to finish fourth in free skating and just off the podium underneath Ulrich Salchow, Madge Syers-Cave and Germany's Martin Gordan. In 1905 and 1906, Torromé would compete at the British Figure Skating Championships and win the men's competition, which wasn't technically a men's competition as female skaters contested the men for the 'men's title' until they were finally given a competition of their own in 1927.

A forty six year old Torromé qualified to compete as a representative of Great Britain at the 1908 Olympic Games and almost did, but instead opted to represent his father's home country of Argentina. He was the only athlete in ANY sport to represent Argentina at those Games and in the more than hundred years and countless Olympic Games since then, there still hasn't been another figure skater from Argentina. Although he would finish seventh of the seven men finishing the men's event at those Games (two didn't finish), Torromé would also judge the pairs figure skating competition at the 1908 Games. Following the Olympics, Torromé continued the work he'd started off the ice during his skating career. Since 1881 at the age of twenty, he was a partner in the Laurence Pountey-lane business Torromé Sons and Co, Commission Merchants, with his father Francisco and brother Francisco (Franco) Jose Torromé. His father retired from the business in late 1903 and left the business to be run by his sons. Horatio (also known as Henri) would pass away in Willensden, Greater London on September 16, 1920. 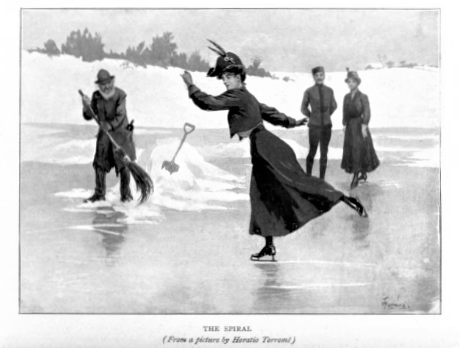 Art by Horatio Tertuliano Torromé, from Edgar Syers' book "The Poetry Of Skating"

Interestingly, Torromé wasn't the only skater to come out of a warm weather climate and achieve excellence back 'in those days'. Jamaican born Louis Magnus followed a similar path, emigrating from Kingston, Jamaica to France and taking up skating as well. Magnus would not only win the French men's and pairs titles but would parallel Torromé's career further by judging internationally as well. Magnus would go on to found the International Ice Hockey Federation and become its first President.

It wouldn't be until 2006 that Argentina would be represented again in ISU competition, when Natalia Alexandra Mitsuoka, who emigrated from Argentina to the United States, would represent her country of birth at the 2006 World Junior Figure Skating Championships. Now officially a member of the ISU, Argentina boasts a handful of ice rinks in areas like Buenos Aries, Haedo and the San Isidro district, where a new generation of skaters are learning lutzes and layback spins. With new events like the ISU Development Trophy providing opportunities to developing skating federations, it may not be another hundred years before we see another skater from Argentina at the Olympics.

Skate Guard is a blog dedicated to preserving the rich, colourful and fascinating history of figure skating and archives hundreds of compelling features and interviews in a searchable format for readers worldwide. Though there never has been nor will there be a charge for access to these resources, you taking the time to 'like' on the blog's Facebook page at http://www.facebook.com/SkateGuard would be so very much appreciated. Already 'liking'? Consider sharing this feature for others via social media. It would make all the difference in the blog reaching a wider audience. Have a question or comment regarding anything you have read here or have a suggestion for a topic related to figure skating history you would like to see covered? I'd love to hear from you! Learn the many ways you can reach out at http://skateguard1.blogspot.ca/p/contact.html.
Posted by Skate Guard Blog at August 03, 2014
Email ThisBlogThis!Share to TwitterShare to FacebookShare to Pinterest
Newer Post Older Post Home