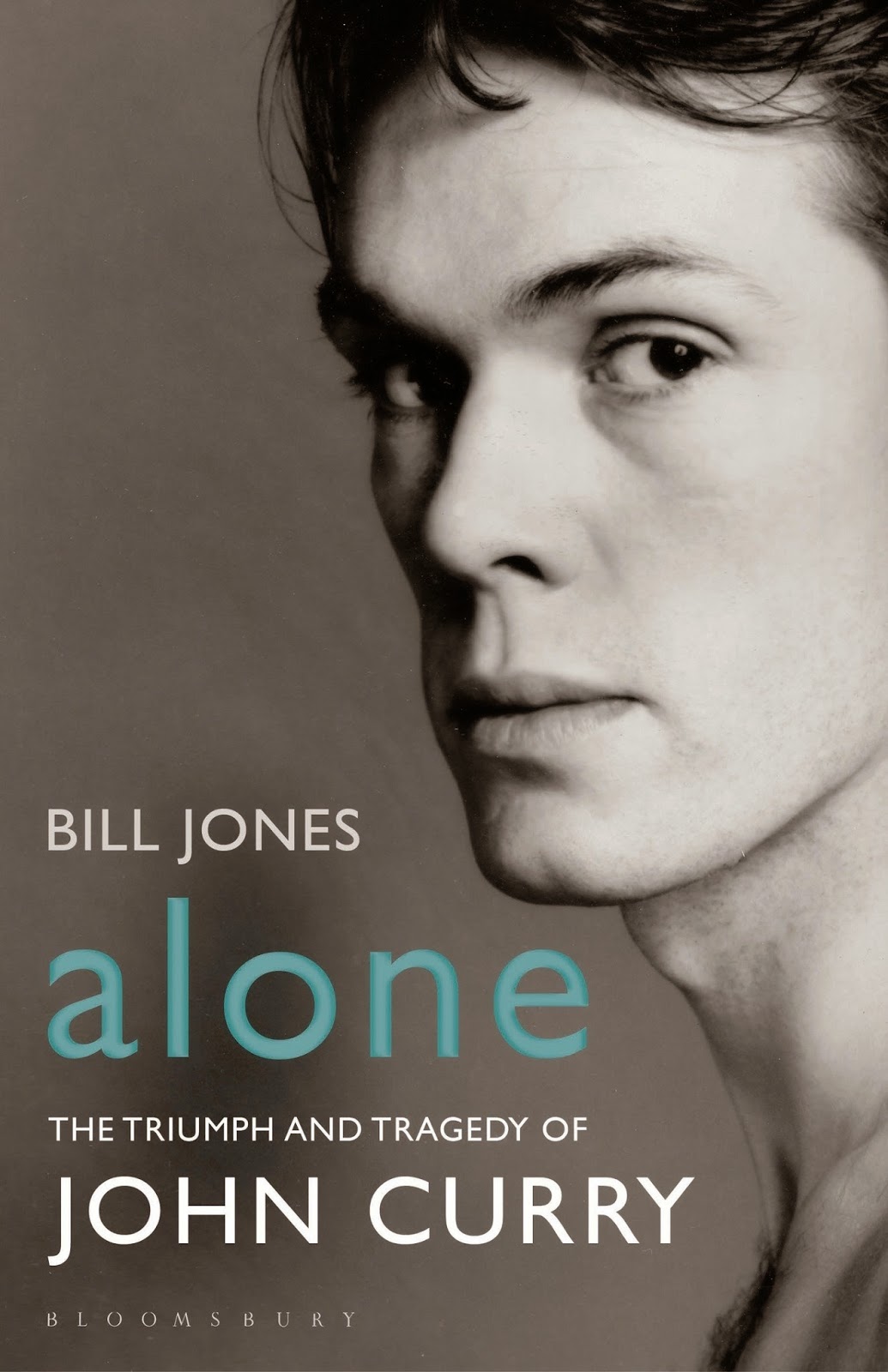 I don't think anyone could argue that 1976 Olympic Gold Medallist John Curry was not one of the most important, significant and influential skaters of the twentieth century and for that matter, of all time. Not only was his skating magnificent, his work as a professional skater and choreographer completely revolutionized what many even considered possible on ice. Simply put, there's something about John Curry's skating that words don't seem to do any real justice. In his brand spanking new book "Alone: The Triumph and Tragedy of John Curry", Bill Jones takes on the daunting challenge of doing justice to the life story of one of skating's most enduring and enigmatic stars.

Although the book won't be released in the U.S. until January 2015 on Amazon.com, it is currently available on the British incarnation of Amazon and here in Canada, you can pre-order your copy and have it in no time flat: it will be released in Canada on August 26, 2014. This quite frankly though is not a book you want to be waiting on. You're better off just paying the international shipping and going the UK Amazon route. You'll thank yourself for it. I spoke to Bill Jones, the author of the book about what inspired him to tell John's story. "I've been a documentary filmmaker all my working life. That is until I wrote my first book four years ago, "The Ghost Runner". That effort won me a major literary award, and I badly wanted to write a second book and found myself thinking back to the night I watched John Curry at the Olympics in 1976. Something about him had always stuck with me, and as I knew nothing about him, I decided to look closer. Thank God I did. Although it's taken me almost three years, I'm very proud of the result and think John's courage - in respect of both his skating style AND his sexuality - should be read about by people today. Don't forget he came out as gay, less than 24 hours after winning the Olympics. In 1976! Even today, many public figures don't have the guts to do this. Curry also told the world he had AIDS when people like Freddie Mercury and Nureyev were trying all in their power to keep it a secret. Incredible, incredible guy."


Coming back to the challenge of putting a skater so enigmatic's story to paper, we talked a bit more about why John's story was so compelling: "Of course, John was a brilliant skater - a genius, and innovator, a risk-taker, a visionary. But what makes him fascinating for a biographer are the extraordinarily complex facets of his personality. At the outset of this project, one of his close friends said: 'How do you write a book about a black hole'? Very soon, I understood the wisdom of that remark. Curry was oblique, secretive and ferociously private. He was also rootless - never owned a home or lived anywhere for long - and his constant seeking movement made him even harder to pin down. But when I did - thanks to over three hundred private letters - I was fascinated by his dark, demanding, driving, unforgiving psyche. This wasn't mere prurience. Curry's loneliness and unhappiness are bound up in so many of his greatest pieces of choreography. Very often he is telling us something on the ice. Such as his maligned reworking of the Icarus myth which he explained with the wry aside : 'Everyone wants to fly too close to the sun'. Undoubtedly Curry flew too close and like thousands of men of his generation, he was burned." In this statement to John's contraction of HIV and AIDS which tragically led to his death in April 1994 at the age of forty seven.

As Jones described Curry as "oblique, secretive and ferociously private", I wanted to ask him more about the challenges of taking on a biographical project like this. "The challenge lay in his secrecy," Jones reiterated. "Diaries he had kept had been destroyed as had many letters. Thankfully, I found boxes of his papers at his former family home (in Warwickshire, England) and these were full of vital keys to his life. His passports especially - blizzards of red ink and stamps - gave me the precise route map of his life. Talking to over one hundred of his contemporaries opened him up piece by piece. As did the help of his family, who enabled me to get a glimpse of a childhood which ended in 1965 with his father's suicide. It would be fair to say that John was not an easy nut to crack! Another major challenge was putting into words the liquid beauty of his skating. Hopefully, I've pulled this off, especially with my description of his gold medal winning skate in 1976." Jones' effort to talk to a who's who from the skating community who were connected to John including his dear friend and contemporary Lorna Brown, Dorothy Hamill, Toller Cranston, Jojo Starbuck and Robin Cousins allowed for a real insight into not only John's character but his wide reaching impact on the figure skating community.

In this information age where we are fortunate to have a wealth of knowledge at our fingertips, I wanted to ask Jones what fans of John's would be most surprised by when reading the book: "I think fans of John's skating will be shocked to learn of the mental torment he was in, for almost all of his life. Curry was a depressive, lonely man who never established a lasting relationship. He was also ferociously tough on coaches, fellow skaters and managers. His journey was strewn with casualties. The outcome, however, was a body of work which no one will ever equal. His 1984 shows at the Royal Albert Hall and the New York Met, for example, were quite literally jaw-dropping. They were also cripplingly expensive and left his company over one million dollars in debt; a financial catastrophe from which he never really recovered. I think fans will also be upset to read of his final years, resigned to his fate, but happy not to be weighed down by the pressures of his skating life."


Going back to what made Curry simply this larger than life, SPECIAL skater, Jones commented that "from what I've seen of skating recently - and I don't pretend to be a student of today's whiz kids - it all seems a little tacky and tricksy, and I wonder where the subtlety has gone. But then Curry had to fight to skate the way he wanted, and as a child had really wanted to be a ballet dancer so his motivation was entirely different. Skating for him was a second choice which he worked tirelessly, and brilliantly, to subvert. Anyway, I do hope people read this book and spread the word. Sadly it will make people cry, but it will also make them head for YouTube to see what all the fuss was about. And if they do, my job is done!"

It was my pleasure to connect with Bill Jones and really garner some insight into his motivation to tell this important story. I have to honestly say that this is a story that needs to be out there and that people really need to take the time to read. E.A. Bucchianeri wrote that "an artist should paint from the heart, and not always what people expect. Predictability often leads to the dullest work, in my opinion, and we have been bored stiff long enough I think." In a time when skating is at this dire crossroads where the artistic movement to reclaim ownership of the ART of skating seems pitted against a judging system that almost cruelly discourages any form of creativity, I think reading about and learning from the story of one of the sport's greatest artists and true masters is just so very important. The more and more I think about it, "the sport of figure skating" is becoming a broken record we need to stop trying to change. "The art of figure skating" is what needs our undivided attention and Curry's legacy and body of work can truly serve as a wonderful source of inspiration, vision and hope... for skating's overall future.

Get your copy of "Alone: The Triumph and Tragedy of John Curry" TODAY on the UK Amazon site! Also, in order for this blog to reach a wider audience, I could sure use a little help. All you have to do is "LIKE" the blog's Facebook page at http://www.facebook.com/SkateGuard for instant access to all of the new blog articles, features and interviews as they are made available. I also share daily updates and headlines from the skating world, videos and much more that's not here on the blog, so if you love figure skating as much I do, it would really be rude not to get on that inside edge! You can also follow all of the fun along on Twitter at http://twitter.com/SkateGuardBlog. If you know someone who loves skating, tell them! It's all about getting a dialogue going on!
Posted by Skate Guard Blog at August 11, 2014
Email ThisBlogThis!Share to TwitterShare to FacebookShare to Pinterest
Newer Post Older Post Home
"As a rule an author has one or two popular ways of contrasting the past with the present. He can treat the past as lying in comparative doleful ignorance, or he can explain that the past was infinitely superior to the day we live in. Of course, either method is the popular journalism of the moment, and in reality there is no sharp contrast, but a gradual transition which leads the past into the present." - Joel B. Liberman, Skating Club Of New York