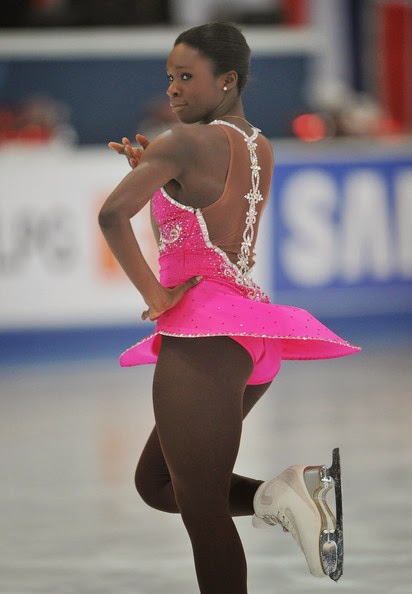 With six consecutive medals at the French Figure Skating Championships (including the gold this past season) to her credit, Maé-Bérénice Méité has proven that she is most definitely a force to be reckoned with. A prodigal jumper, Maé-Bérénice has represented France on the world's biggest stages: the World Junior Championships, the Junior and Senior Grand Prix circuits as well as the European Championships and the World Championships. Her tenth place finish at the 2014 Sochi Games in the ladies event was the highest placement by a French ladies skater since 1998 when Vanessa Gusmeroli and Surya Bonaly both found themselves in the top ten. Certainly not just a jumper, Maé-Bérénice's unorthodox and creative program choices demand one's attention. It was my pleasure to speak to her at length about her career to date, coach Katia Crier, goals, life off the ice and much more in this fantastic interview you are bound to love:

Q: Last season, you won the French National Championships after winning medals the five previous years. What did it mean to you to stand atop the podium and become France's National Champion?

A: Last season, winning the national title was a real relief. I finally got it after five years of fighting and four silver medals. This title means a lot to me because first, it's one thing to be the French national silver medallist and and other to be the National Champion... and second, after all those years I've finally reached one of my several goals. For me, it was a good thing to have it especially during this Olympic year. I really wanted to go to Sochi and from the beginning of the season, I knew I had to do a perfect journey from the first competition to the Europeans to get my ticket to the Olympics, National Championships included.

Q: Your career has had so much success - trips to the Olympics, European and World Championships, Grand Prix events, Junior Worlds and international competition success, including a win at the Ondrej Nepela Memorial in 2011. Looking back on your career so far, what are your proudest moments... and what moments were the hardest?

A: Let's start with the hardest one! Back during the 2009/2010 season, I decided to have a new coach after ten years being with the same one. It wasn't the easiest decision I had to make but when you're starting to compete at a high level, you have to make some difficult choices. Then I'd say the National Championships that I've missed and my second European Championships in Sheffield. Very hard time! That competition was my ticket for World in Nice. I really wanted to do it because it was in my home country. Unfortunately I screwed up so I was in Nice but in the stands, not on the ice. My proudest moments are simply when I see that very beautiful smile on parents faces. Without them, I wouldn't be here and I wouldn't be the person I am today. But you know, we can always be proud of ourselves as long as we tried to do our best. It's not always perfect but at least we tried with our heart and our soul. I think that's what we should be more proud of! But of course, being in Sochi was so far the best experience of my entire life and I'm very proud of it. But I have to keep working. It's only the beginning! 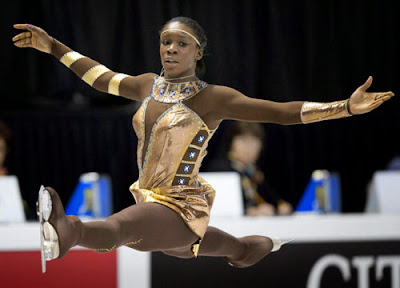 Q: You are coached by the very talented Katia Crier and work with Laurie May and Sandra Garde (a gifted choreographer and skater!) on choreography. What is your relationship like with your coaches and choreographers and why does it work so well?

A: I started training with Katia in 2009/2010 and you know, she knows where she goes and why she goes there so I just trust her and her knowledge and do whatever she has told me. She has said  "I don't care if you're ill, sick, if you got a cough or if you don't want to work today... just go on the ice and do your job and don't complain" and also "You're allowed to say that you are tired only on Saturday after 11 AM" so she has taught me what high level work is! We both love when things are well made so that's why it worked so good between us! It's the same with Laurie and Sandra... different people but complementary! That's how we keep the good work going!

Q: You've always dreamed of developing your own perfume! Tell me about your passion for wonderful scents and if you had to make a signature perfume called Maé Bérénice, what would it smell like?

A: Oh yes, I have always loved perfume since I was a child and that's why I wanted to study sciences at school. I really, really love men's perfume and I got one for me called "La nuit de l'homme by Yves Saint Laurent" and it has a very strong and powerful smell! Yes, some of the perfumes I wear are for men. I know it's strange but I really love strong and powerful scents! I also have a LOT of women's fragrance. I love scents! If I created my own perfume, it would smell something strong and sweet at the time, something a bit mysterious with that little something that would make the difference!

Q: You are a POWERHOUSE of a jumper! What is your favourite and least favourite jump?

A: My favourite jumps... Hmm... double Axel and triple Lutz! My least favourite one is the triple flip.

Q: France is rich in skating tradition and it has produced so many fantastic ladies skaters over the years - Surya Bonaly, Laetitia Hubert, Vanessa Gusmeroli and countless others... what French ladies skaters do you look up to most?

A: I look up to Surya the most because of all her medals and titles. She has very good mental focus and I admire this.

Q: Looking towards the coming season, what are your main goals for this season and what can you share about the programs you will be skating?

A: Well, my main goals are really getting better and better and to get better places on the Grand Prix and at Europeans and Worlds! About my music, this year I wanted strong and powerful music. I won't say more. You'll see during the season!

Q: Of the skaters you are competing against, who do you admire most?

A: I admire a lot of skaters I've competed against but also a lot of men, each one for different reasons! First, I love Mao Asada because not every lady can do a triple axel. Then Yuna Kim, she is the queen and it's not for nothing. She's very feminine and has beautiful jumps. I love her skating as much as I love Ashley Wagner's skating. They are both always feminine with so much power in every single step they are doing. About Ashley, I had the chance to do an entire season competing against her (Skate America, Bompard, Olympics and Worlds) and I always looked for her Pink Floyd short program because that one was just so amazing! I was just so in love with this one! Also, I'm in love with Carolina Kostner. Beautiful long arms and legs and she knows how to use them. About the men, I love Daisuke Takahashi and Florent Amodio. They both play with the audience and have that body movement that I love! Patrick Chan as well for his amazing transitions. They all have that little something and everyone can only remember each of them for that and that's why I love them: they're different!

Q: If you could have a day completely away from the rink, where would you go, what would you eat and what music would you be listening to?

A: I would go to a beautiful place lost in the middle of nowhere... a haven of peace with waterfalls. I would bring my best friends there with no phone, no internet, nothing but nature. We would eat fruits from that place and we would be listening all day long to Beyoncé's songs.

A: Maybe that I'm a very shy person!

A: Kurt Browning: who cannot love that dancing man? He is just awesome and so creative! Brian Joubert: through up and downs he has always showed what a real champion is. He has so many titles but I admire this most... even when people didn't believe in him, he just kept doing what he really loves. Marina Anissina and Gwendal Peizerat: when they won the Olympics I was so young but so happy! I could never forget the "fire haired" woman and their beautiful exhibition program "Susanna". That one definitely made me love ice dance.

Q: If you could change one thing about the world, what would it be?

A: Tolerance! This world needs more tolerance... and optimism!

Skate Guard is a blog dedicated to preserving the rich, colourful and fascinating history of figure skating and archives hundreds of compelling features and interviews in a searchable format for readers worldwide. Though there never has been nor will there be a charge for access to these resources, you taking the time to 'like' on the blog's Facebook page at http://www.facebook.com/SkateGuard would be so very much appreciated. Already 'liking'? Consider sharing this feature for others via social media. It would make all the difference in the blog reaching a wider audience. Have a question or comment regarding anything you have read here or have a suggestion for a topic related to figure skating history you would like to see covered? I'd love to hear from you! Learn the many ways you can reach out at http://skateguard1.blogspot.ca/p/contact.html.
Posted by Skate Guard Blog at September 18, 2014
Email ThisBlogThis!Share to TwitterShare to FacebookShare to Pinterest
Newer Post Older Post Home