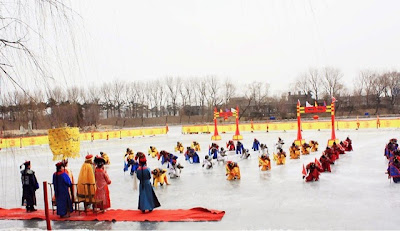 In previous articles The Royal Skating Mishap That Could Have Changed History and Picture It... The Holy Roman Empire... 1610, I delved into the connection between figure skating and the royals. It turns out Queen Victoria and former Archduke of Austria, King Of Bohemia, King Of Hungary and Croatia and the Emperor of the Holy Roman Empire Rudolf II weren't the only members of the noble class that had a great affection for figure skating centuries ago.

Halfway across the world, in China skating gained public interest during the Song dynasty. The sixth emperor of the Qing dynasty, Qianlong Emperor (born Hong-li) reigned from 1736 to 1766. The Qianlong Emperor was a great aficionado of ice skating and called it a "national custom".

One of the most important events of the winter for the Qing royal household was an exhibition by the "Eight Banner Ice Skating Battalion", a special force of 1600 soldiers which was trained specifically to do battle on icy terrain. These soldiers needed to learn how to skate proficiently to be able to move 350 kilometers on skates in a single day to get to their enemies. In the "Eight Banner Ice Skating Battalion", two hundred skaters that were considered the most skillful would don knee pads and secure their shoes with leather and attachable single iron blades for speed or double iron blades for proficiency. They would then demonstrate their skating prowess to an appreciative Royal court, including the Qianlong Emperor himself. These 'Ice Games' have survive in paintings and literary descriptions. 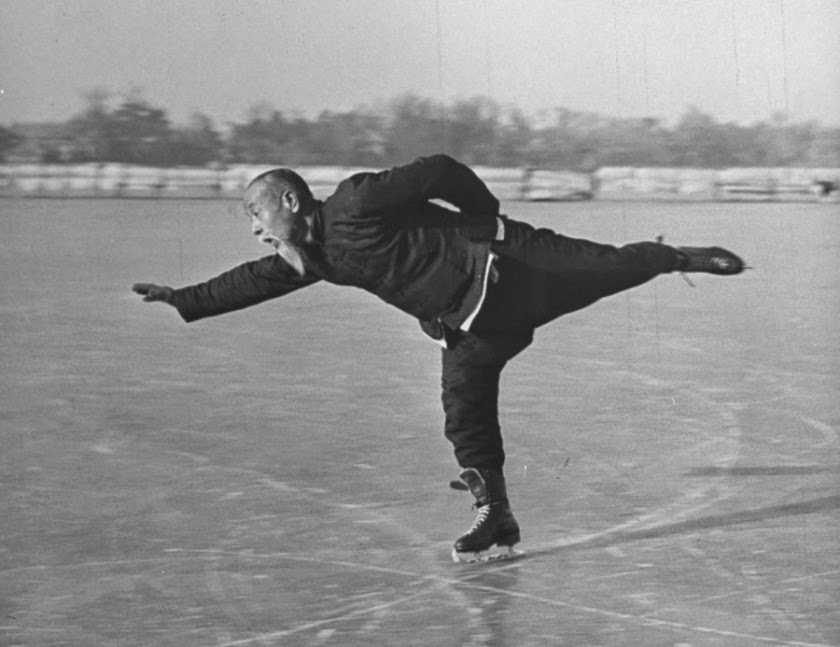 Skating's popularity in China among royals continued in the early twentieth century, when a famous Manchu skater from the Uya clan became one of the royal household skaters in Empress Dowager Cixi's reign. Although MUCH despised, Empress Cixi was an aficionado of skating and Kunming Lake on the grounds of the Summer Palace she provided was often used for ice skating in the winter. This Manchu skater's name was Wu Tongxuan and he frequently appeared in Beijing ice rinks to perform for audiences of the era. In February 1946, Time Life photographer Jack Wilkes discovered and photographed Wu and shared a bit more of his story in the accompanying LIFE magazine article: "Once a week during the winter a slight, bearded, 66-year-old Chinese gentleman named Wu Tang-shen solemnly pads his way down to the ice pond in the Forbidden City section of [Beijing], changes his sandals for a pair of 20th-century skates and spends a quiet Chinese afternoon cutting complicated figures on the ice. There a short while ago LIFE photographer Jack Wilkes discovered and photographed Mr. Wu while he executed his pirouettes, crosscuts, beaks and spread eagles with the ease of an accomplished figure skater of the old school. At the age of 16 Mr. Wu cut these capers for the Empress of China and was rewarded with a pension of five taels of silvers ($4) per month for life. But the Manchu dynasty [now commonly referred to as the Qing Dynasty] unfortunately died before Mr. Wu, and now Mr. Wu works for a living as a merchant. His skating still retains its former grace, and the figures he cuts are those of Western skaters." At this time, Wu would obviously no longer be skating for Empress Dowager Cixi, who passed away in 1908 but he was still skating for audiences on a pond outside The Forbidden City in 1946 at the age of 66. There is little information about what happened to Wu Tongxuan later in life, but isn't it nice to think that he would have continued skating to the end of his life? 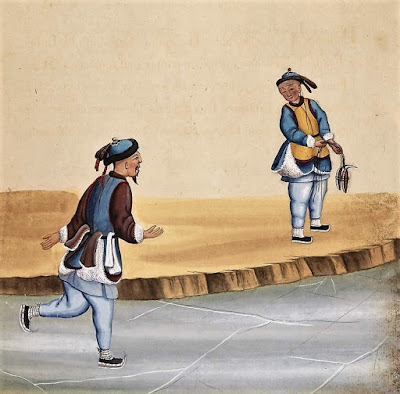 China would not join the International Skating Union until 1956, nor would the Ice Skating Association Of The People's Association Of China send skaters to the World Figure Skating Championships until decades later, but Tongxuan's early introduction of skating to the Chinese people would set forth a ball in motion that would later see skaters like Lu Chen, Xue Shen and Hongbo Zhao and Qing Pang and Jian Tong win world titles as representatives of China. Today, figure skating is more popular than ever in China. Han Yan finished seventh in the men's event at the 2014 World Figure Skating Championships and both of the country's pairs teams would place in the top ten at this year's Worlds as well. Though the days of "Eight Banner Ice Skating Battalions" and royal household skaters might be over, Chinese figure skaters are now revered much like royalty among the Chinese people as popularity of skating across Asia continues to skyrocket. Not bad for a country just taking their first steps in international competition thirty years ago, now is it?

Skate Guard is a blog dedicated to preserving the rich, colourful and fascinating history of figure skating and archives hundreds of compelling features and interviews in a searchable format for readers worldwide. Though there never has been nor will there be a charge for access to these resources, you taking the time to 'like' on the blog's Facebook page at http://www.facebook.com/SkateGuard would be so very much appreciated. Already 'liking'? Consider sharing this feature for others via social media. It would make all the difference in the blog reaching a wider audience. Have a question or comment regarding anything you have read here or have a suggestion for a topic related to figure skating history you would like to see covered? I'd love to hear from you! Learn the many ways you can reach out at http://skateguard1.blogspot.ca/p/contact.html.
Posted by Skate Guard Blog at September 28, 2014
Email ThisBlogThis!Share to TwitterShare to FacebookShare to Pinterest
Newer Post Older Post Home