The Ghost, The Skater And The Shotgun 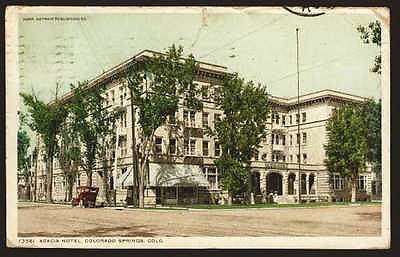 In her 2012 book "Ghosts Of Colorado Springs And Pikes Peak", author Stephanie Waters explores many stories that don't exactly have you clamoring to go for a late night walk in Colorado without your flashlight at night. One particular story she highlights couldn't be more perfect for my dear friend and fellow blogger Allison Scott if it tried. It's got everything a Colorado Springs resident could want: a luxurious hotel, a figure skating connection... and a ghost. Before we get into this chilling story's figure skating connection, let's turn to the July 31, 1907 edition of the Reading, Pennsylvania newspaper The Reading Eagle, shall we? In the article "Sensation In Death Of A Beautiful Girl", we learn about the inquest into the death of an award winning actress named Laura Mathews who was staying Colorado Springs' Acacia Hotel at the time of her untimely and suspicious death. Matthews was found on a mountain slope with a bullet through her brain and there was quite a debate as to whether the actress had taken her own life or was a victim of foul play. The inquest couldn't have been any more dramatic.

Let's start with the biggie. An Amos R. Rumbaugh was about to testify when he shot himself IN THE COURTROOM! He was rushed to hospital by deputies where he died the next day and after his death, it was learned that he had been infatuated with Laura for about two weeks. The 1907 article states that "rumours are persistent here that Mr. Rumbaugh was an agent sent here by Eastern men to induce the girl to commit suicide, or otherwise to cause her to disappear." A fellow guest at the Acacia Hotel said Mathews feared Rumbaugh was infatuated with her and that she was afraid to go back late at night to her hotel. Rumbaugh wasn't the only man who was connected to the young actress. She'd entertained a lengthy relationship with millionaire Chas Coey. Coey had told her he wanted to marry and start a family... but he was already engaged to a woman named Victoria. Mathews was enraged and showed up at his door, caused quite a scene begging for him to end his engagement to Victoria and stormed off saying she'd rather die than ever see his face again. She took off in a huff and checked in with her nurse Tillie Green at the Acacia Hotel. In the meantime, Rumbaugh was kind of around skulking in the shadows and professing his interest in Mathews to anyone who would listen. Green said that "Rumbaugh was desperately in love with Laura. He had previously told me that he was engaged to marry her; that they would go East on their honeymoon, etc. He did not know Coey. When I told Rumbaugh that Laura had committed suicide, he seemed like one possessed. He swore he would go to Chicago and kill Coey, and his entire motive from that time until his suicide seemed to be that of revenge on Coey. He killed himself through love of the girl." So here we have this woman who some still seem to think had killed herself (we'll get to why in a bit) and we have a lover who's engaged named Chas and this (married) man named Rumbaugh who's infatuated with her. I can already see a few scenarios brewing at this point, can you? Let's look at the suicide theory and how that came about. Why, her nurse Tillie Green could explain that one to you.
The 1907 article states that "another startling feature is the discovery that Miss Green, the dead girl's nurse, had prepared and sent out letters announcing the suicide of Miss Mathews before the latter was dead - almost a day before, in fact. She explains this peculiar action by the statement that she knew Miss Mathews would kill herself". Mathews' sister Mrs. Marshall gave an interview to press in Kansas City where she said that "my sister was to return to Chicago next week and intended us to visit us en route. She wrote in a happy mood and only a few hours before her death sent a pair of moccasins to my daughter. I am sure it is not a case of suicide." Was Mathews' nurse somehow connected to her death? If she was, she was shifting the blame. Tillie Green suggested that the coroner was "keeping the lid" on the case to protect rich Chicago men who she had intimidated. Green said that "Coey and Miss Mathews were intimate friends for two years" and that "Miss Mathews expected Coey to marry her and the date was set several times, but always postponed by Coey". Whatever the case may be and however much suspicion might have fallen upon Coey, Rumbaugh and even Green, on August 1, 1908 (over a year later from when the courtroom drama first began) the foreman of the jury announced: "We, the jury find that Laura Mathews came to her death by the shot of a pistol; that said pistol wound was self inflicted with suicide intent".

Waters' book states that "mysteriously, at the very moment the suicide verdict was announced, a haunting high-pitched scream reverberated throughout the building. Janitors thought the boiler had exploded until it was discovered that the timing cable on courthouse clock had suddenly snapped. Time stood still on the courthouse clock tower for many years until money was saved to replace the expensive copper cable. The clock still acts as if possessed by unseen forces now and then, and paranormal investigators have become convinced that it is a message from the grave of Laura Mathews."

So as usual, you're probably all wondering what this crazy blogger from up in Nova Scotia is going on about and how it could possibly connect to figure skating... and as usual, my job is to do a little 360 and bring things full circle a little bit. Today, the Acacia Hotel rents rooms for senior housing and also hosts a beauty parlour, barbershop and until just a few years ago, a little hole in the wall Cheers type pub called Jinx Place. The bar was owned by a woman named Jeanne A "Jinx" Clark, who according to Waters' book was "a tough-as-nails ranchers daughter". She was also a champion figure skater who performed at The Broadmoor, toured with the Holiday On Ice show for fifteen years and travelled all over the world during the forties and fifties before buying the bar in 1960. Jinx passed away in March 2007 and interestingly enough as it relates to this piece was a history buff herself - she was the curator at the Lamar Big Timbers Museum. Jinx was evidently quite proud of her history as a figure skater and proudly displayed her lucky skates above the cash register at Jinx Place along with a sprig of plastic mistletoe. She had won a figure skating competition on Christmas Eve of 1946.

"Legend has it" that Jinx Clark's bar was haunted by Laura Mathews and local artist Gail Anne Bailey even painted a ghostly painting of the young actress who met a suspicious and tragic end. According to Waters' book, one night a group of costumed actors from a local community theatre group when to Jinx Place after a show. An actor named Robert Rais saw a costumed entertainer in period clothing who wasn't part of their group and asked her if she was an entertainer as well. She apparently looked just like the woman in Bailey's painting of Mathews. The costumed actress disappeared before Rais' eyes and he left screaming. Waters' book purports that Jinx grabbed a gun from behind the counter and exclaimed, "If that damn ghost scares away any more good paying customers, I'll shoot her!" and then (accidentally?) shot a hole through the ceiling. Apparently after the dust settled, a shell shocked old barfly responded to Jinx with, "If that was last call, all you had to do was say so." Ghost or not, you don't MESS with a figure skater apparently!

The space occupied by Jinx Place in the Acacia Hotel building is now (or at least was recently) occupied by a print centre and is located right in heart of downtown Colorado Springs at 104 East Platte Avenue. One has to wonder if Laura's ghost still remains earthbound and connected to the last place she took up residence before her untimely death? You can go get some photocopies made and find out. I'll just stay here with my wine until you get back and tell me ALL about it.

Skate Guard is a blog dedicated to preserving the rich, colourful and fascinating history of figure skating and archives hundreds of compelling features and interviews in a searchable format for readers worldwide. Though there never has been nor will there be a charge for access to these resources, you taking the time to 'like' the blog's Facebook page at http://www.facebook.com/SkateGuard would be so very much appreciated. Already 'liking'? Consider sharing this feature for others via social media. It would make all the difference in the blog reaching a wider audience. Have a question or comment regarding anything you have read here? Have a suggestion for a topic related to figure skating history you would like to see covered? I'd love to hear from you! Learn the many ways you can reach out at http://skateguard1.blogspot.ca/p/contact.html.
Posted by Skate Guard Blog at October 07, 2014
Email ThisBlogThis!Share to TwitterShare to FacebookShare to Pinterest
Newer Post Older Post Home
"As a rule an author has one or two popular ways of contrasting the past with the present. He can treat the past as lying in comparative doleful ignorance, or he can explain that the past was infinitely superior to the day we live in. Of course, either method is the popular journalism of the moment, and in reality there is no sharp contrast, but a gradual transition which leads the past into the present." - Joel B. Liberman, Skating Club Of New York