'Tis The Cezanne For Art History: Gilbert Stuart's 'The Skater' 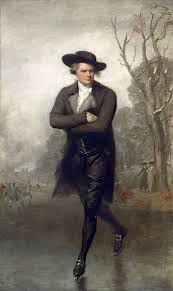 In 1775, American artist Gilbert Stuart left the United States bound for London, England and became an apprentice of fellow Anglo-American painter Benjamin West. His success was prodigal and as the student caught up to the teacher, West desired to sit for a portrait by his star pupil. This painting was so well received at the 1781 Royal Academy exhibition that Stuart was approached by a well to do Scotsman named William Grant who wished to commission a portrait as well.

When Stuart and Grant met to commence work on the portrait, Grant remarked that "on account of the excessive coldness of the weather... the day was better suited for skating than sitting for one's portrait." Rather than sit in the frigid cold, both men headed for the Serpentine River in London's Hyde Park and took to the ice to get their skate on. The artist turned out to be an artist on the ice as well, by accounts attracting an admiring crowd with his skating. However, the ice began to crack and Grant pulled Stuart to the shore by his coattails. When they returned to the studio, Stuart began to paint Grant's head but suggested instead a painting inspired by their icy adventure at Hyde Park. Grant consented and 'The Skater' was born from Stuart's memory of their experience.

'The Skater' appeared at the following year's Royal Academy exhibition and was an instant hit... a first. Skating simply hadn't been greatly portrayed in classical art much previously. Notable exceptions were pieces by Pieter Bruegel de Elder, Hendrick Avercamp's "Winter Landscape With Skaters" (circa 1608), Adriaen Pietersz van de Venne's 1625 painting "The Four Seasons: Winter" and the nude man on the oversized skate on the right wing of the Triptych of the Garden Of Earthly Delights by Hieronymus Bosch (circa 1500). Although previous pieces of art had depicted ice skating, none I was able to find focused so centrally on one single figure on skates. Art critic of the time John Collum wrote of Stuart's painting, "one would have thought that almost every attitude of a single figure had long been exhausted in this land of portrait painting, but one is now exhibited which I do not recollect before - it is that of skating." 'The Skater' kickstarted Stuart's career and he described his sudden success as being "suddenly lifted into fame by a single picture". Today, you can see Stuart's painting at the National Gallery Of Art in Washington, D.C. It is part of the American Collection, alongside works by Thomas Cole and Albert Pinkham Ryder.

The painting likely inspired artists to use skating as a medium for years to come, including Scottish artist Henry Raeburn's masterpiece 'The Skating Minister' which was created in the 1790's and not fully attributed to Raeburn until 2005. Skating would continue to inspire artists - visual, literary, musical and performance - for years to come. From skating's own Toller Cranston to poetry by William Wordsworth to music by composer Émile Waldteufel's Les Patineurs Waltz (Die Schlittschuhläufer-Walzer), skating has played muse to all walks of art and continues to do so to this day. Two time Olympic Gold Medallist Dick Button has one of the largest private collections of skating art going, including R. Tait McKenzie's 1925 bronze ice statue of Button's coach Gus Lussi 'The Ice Bird', an 1875 oil painting of a man skating in a kilt by John Gadsby Chapman and 1875 W.H. Willcox painting "Skating On The Schuyhill". The connection between art and skating has inspired a lovely book by two time World Champion Frances Dafoe called Figure Skating And The Arts that delves into this topic deeply... but trust me, art history and figure skating may well be making a reappearance or two in the blogs to come.

In order for this blog to reach a wider audience, I could sure use a little help. All you have to do is "LIKE" the blog's Facebook page at http://www.facebook.com/SkateGuard for instant access to all of the new blog articles, features and interviews as they are made available. I also share daily updates and headlines from the skating world, videos and much more that's not here on the blog, so if you love figure skating as much I do, it would really be rude not to get on that inside edge! You can also follow all of the fun along on Twitter at http://twitter.com/SkateGuardBlog. If you know someone who loves skating, tell them! It's all about getting a dialogue going on! Fabulous skating is too fabulous to keep secret. Am I right or am I right?
Posted by Skate Guard Blog at November 27, 2014
Email ThisBlogThis!Share to TwitterShare to FacebookShare to Pinterest
Newer Post Older Post Home
"As a rule an author has one or two popular ways of contrasting the past with the present. He can treat the past as lying in comparative doleful ignorance, or he can explain that the past was infinitely superior to the day we live in. Of course, either method is the popular journalism of the moment, and in reality there is no sharp contrast, but a gradual transition which leads the past into the present." - Joel B. Liberman, Skating Club Of New York