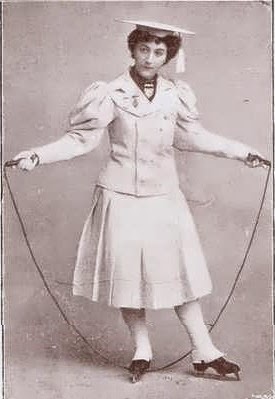 If you know a thing or two about figure skating's history (which I like to think I do), you definitely know the name Madge Syers. If Jackson Haines is considered the sport's father, Madge Syers would surely be considered skating's mother. However, one story the history books don't always tell you is that of Mabel Davidson, the first female skating star who predated Syers and left her own indelible impression on the sport.

What impression did Mabel Davidson make on the people who watched her skate? I want to start by sharing a charmingly glowing excerpt from the January 6, 1897 edition of The Sketch: "She has the great advantage of a pretty face, and frocks to match; she is exquisitely graceful, while of her skill it would be hard to speak too highly or write extravagantly. She is a perfect mistress of ice, takes every possible and impossible liberty with it, and the poor ice can't ever manage to retaliate. She runs over it by way of variation, digs the heels of her skates into its tender parts, leaving a palpable bruise, while the ice looks coldly on and resigns itself to wait patiently for the amateurs and take revenge on them. Miss Davidson's exhibition is one of the sights of London. On the night of the last Carnival Ball at the Skating Palace - a most successful function from start to finish - the great skater was in special form. At about midnight the instructors cleared the ice, and she appeared in a sort of Canadian costume, very appropriate, and fitting her like the proverbial glove. The spirit of gaiety, the blaze of lights, the gay costumes, the sweet music, all seemed to inspire Miss Davidson with an energy and daring that appeared anxious to eclipse all its previous efforts. She held the spectators spellbound while she treated the ice to such a series of gymnastics as is seldom or never seen. All the things that careful people would avoid on nasty slippery ice she essayed with a coolness and indifference that made every man cheer with all his might, and almost made some of the ladies forgive her for being so well dressed and agile... She is one of the best."

The February 6, 1897 edition of the Mariposa Gazette was just as complimentary: "There is an American girl in London who can probably perform more wonders on skates than any other girl living. In fact, there are few men who can equal the feats and the feet of Miss Mabel Davidson on the ice. At present she is performing - if a pleasure may be called "performing" - at the National Skating palace. She is a veritable 'queen of the ice' and is a constant marvel to the Londoners. Never a fairy had lighter feet than this slender miss. She appeared last week before a crowd numbering thousands... Miss Davidson claims the title of the 'champion lady skater of the world' and she certainly seems to deserve that honor. She swayed and turned and whirled and pirouetted and waltzed with amazing rapidity and grace. All her figures were cut so rapidly that few but expert skaters themselves could follow the changes. Probably the tricks that were most applauded were a foot over foot movement and a forward and backwards run in a sitting posture, one leg being kept straight out in front of the body. Miss Davidson appeared in a bright Scotch plaid frock, with a skirt that barely reached to the top of her high boots. Once upon the ice, she dud not delay her performance a moment. She began by skating swiftly backward around the big rink. There was nothing particularly artistic in this. Many an English girl could have done the same thing. Stopping suddenly, Miss Davidson reversed and came gliding around in the sweeping outside edge movement so familiar to all. The outside edge backward was more difficult and elicited a storm of applause. At the same time there were many who discounted Miss Davidson's work, apparently because it was so easily done." The article goes on to describe in vivid detail and great enthusiasm how Davidson one over the large crowd - to a standing ovation - with swing rolls, figure eights, spread eagles, spins and shoot the ducks. It concluded by saying that Davidson herself "concluded with a bewildering series of cross foots, serpentines, loops and ringlets that put the rink in an uproar. When she had finished, there was a loud volley of 'Bravos!' and everyone went away convinced that Miss Davidson deserved the lady championship." 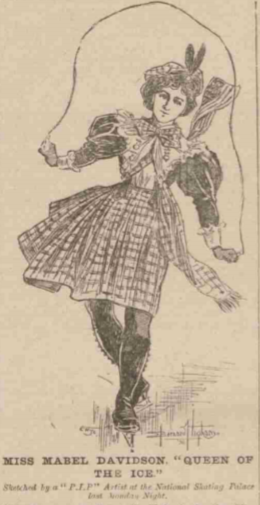 Who was this precocious young skater who'd managed to escape the consciousness of figure skating history?  Mabel Davidson was originally from Minnesota and part of a skating family who toured Europe. Believe it or not, she wasn't the first American woman to do so. In 1873, a roller and figure skater from Concord, Massachusetts named Carrie Augusta Moore had put together an exhibition tour of Europe with Callie Curtis and E.T. Goodrich (former competitors of Jackson Haines), paving the way for the Davidson family (with Mabel as the star attraction) to tour London and Paris in 1896. Where did Mabel earn the title 'Champion Lady Of The World'? We know that the Davidson family moved from Minnesota to Toronto in the 1880's and one clue to that unofficial world title claim might perhaps be in Margaret Ann Hall's book "The Girl And The Game: A History Of Women's Sport In Canada". Hall notes that the Rideau Skating Club held a ladies skating competition in 1890 and that in that time period, Mabel Davidson was giving skating exhibitions "all over Ontario and in the Maritimes".

What makes Mabel's story even more compelling is that in addition to giving skating exhibitions, she was in fact the sister of a bicyclist and skater named - wait for it - Harley Davidson... and she used to bring her bicycle on the ice as part of her act. Are you kidding me? That's insane and I love it! For the record though, although a cyclist named Harley Davidson might raise some eyebrows, it was actually William S. Harvey and William A. Davidson who pioneered the motorcycle of the same name. Back to Mabel's bicycling on ice...  In an interview with England's Cycle And Motor World publication, Mabel Davidson explained, "My wheel never slips with me. Of course, I have steel coverings for the tyres; but with that exception my wheel is like an ordinary one. Even when I am riding out in the streets on slippery, greasy roads, I have never had a side-slip." In this interview, Mabel was asked about her skating practice regime and responded, "I scarcely ever practise; my work here keeps me in very good trim. I give two shows a day, each one lasting fifteen to twenty minutes. Of course, my full performance of all of my tricks takes me considerably longer than that. I could go on for an hour, but I find it best to stop long before I get tired... I've been cycling for years, and skating ever since I was eight years old. One of my brothers is the amateur champion of Canada, and the other is the professional, so I'm very interested in cycling."

In addition to her talents for skating and cycling, Mabel also enjoyed acting and told Cycle And Motor World "I should very much like to play the role of 'Dick' in 'The Two Little Vagabonds', but I don't expect to go back to the stage unless some very enterprising manager will produce a play with an ice scene in it - real ice it must be - and let me play a part in which my skating would be useful... But I'll have to wait a long time for that."

Tragically, Mabel's almost prophetic idea of the combination of skating and theatre would never come to be. She died in St. Paul, Minnesota on November 24, 1898 from "consumption, resulting from a heavy cold contracted while on a professional tour of England" according to her obituary. She was only twenty five years old. It would only be a few short decades until the worlds of theatre and skating would come together on the silver screen in the pictures of famous skater/actresses like Sonja Henie, Belita and Vera Hruba Ralston... and Mabel must surely have been smiling down at their efforts.

Skate Guard is a blog dedicated to preserving the rich, colourful and fascinating history of figure skating and archives hundreds of compelling features and interviews in a searchable format for readers worldwide. Though there never has been nor will there be a charge for access to these resources, you taking the time to 'like' on the blog's Facebook page at http://www.facebook.com/SkateGuard would be so very much appreciated. Already 'liking'? Consider sharing this feature for others via social media. It would make all the difference in the blog reaching a wider audience. Have a question or comment regarding anything you have read here or have a suggestion for a topic related to figure skating history you would like to see covered? I'd love to hear from you! Learn the many ways you can reach out at http://skateguard1.blogspot.ca/p/contact.html.
Posted by Skate Guard Blog at January 01, 2015
Email ThisBlogThis!Share to TwitterShare to FacebookShare to Pinterest
Newer Post Older Post Home