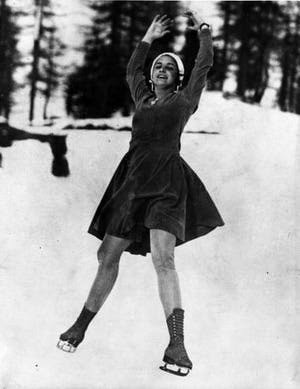 In her awe inspiring career, Maribel Vinson Owen won an incredible fifteen U.S. titles, nine of them as a singles skater and the rest as a pairs skater with partners Thornton Coolidge and George 'Geddy' Hill. She also won an Olympic bronze medal behind Sonja Henie in 1932, medals at the World, North American and European Championships, wrote for "The New York Times" and embarked in one of the most successful coaching careers in U.S. figure skating history. Among her students were 1956 Olympic Gold Medallist Tenley Albright, Michelle Kwan's future coach Frank Carroll and her own daughters Maribel and Laurence, U.S. Champions both as well.

As we all know, Maribel and her daughters were among the seventy two passengers who lost their lives on the ill fated Sabena Flight 548 that killed the entire 1961 U.S. team and changed the course of figure skating history as we know it. At the time of her death, Maribel was only forty nine. As you may not know, though, during her tenure as a respected coach Maribel wrote three books about skating and it was by great luck that I happened upon a copy of her 1938 "Primer Of Figure Skating". As I leafed through the book, I was taken aback with the detailed instruction on ice dance and school figures but what got me most was the commanding and insightful voice that jumped off the pages. Rather than write a biography on Maribel's incredible career (check out Patricia Shelley Bushman's "Indelible Tracings" and "Indelible Images" for tons on Maribel) I thought it best to share Maribel's own words of wisdom about the sport and art of figure skating... all of which has bearing both to skaters and coaches today. Get yourself that hot beverage I'm always talking about and prepare to learn a thing or two from a long lost legend...

"The arched back, well-bent skating knee, nearly straight free knee, and turned-out free hip and toe, combined into the upright, easy posture of the graceful figure skater is not a natural position for anyone at first. On the other hand no matter how facile on your blades you may later become, you will never be truly graceful unless you do have a nearly straight free knee well turned out from the hip, a well-pointed free instep, and an arched back, so you might as well begin practicing them from the very first stroke."

"You must have a good opening and a good finish, in other words, a good first impression and a good last impression. That is important. Since you will be marked for difficulty and variety, you must include as many different moves of as much difficulty as you are sure of doing well; but since you are also to be marked for 'performance', you will only get demerits instead of credits for things you can't really execute properly. This is why most novices fail to remember and why a lot of them are surprised when their marks go up. 'But I did a Lutze jump, a change-of-foot spin, and tried an Axel-Paulsen,' they may say. 'Don't I get credit for that?' Yes, but look at how you did them: touched the free foot, wobbled, and almost fell after the Lutze; struggled in awkward position and traveled many feet on the spin, actually fell on the Axel, and were badly out of position on almost everything, while so-and-so who won did far less but did what he did correctly. The answer to all this is, don't do a senior program until you are a senior skater. If you are a novice you will get far more credit for doing a novice program in really good style than if you scramble untidily through a routine that is still beyond your powers."

"You should utilize the whole ice surface, neglecting neither one end nor the other nor yet the middle. Diagonal moves and center figures that move across the ice lend variety and should not be neglected. It is infinitely boring always to watch a skater moving in one direction. You can gain interest, too, by varying the tempo of your moves, some slow to contrast with the speed of most of the program, but always in time to the music. Keep all your moves within easy sight of all spectators. Don't dance too close to the sides of the rink or to the ends; that way someone is sure to miss part of what you are doing."

"Anything that doesn't contribute an impression of speed and freedom of movement is undesirable."

"I am sure you realize that everyone who takes up this beautiful, exasperating, baffling, fascinating sport of figure skating feels like that from time to time. There is nothing to do but persevere, practice, and above all think what may be the trouble. For days you may be annoyed at a stubborn figure that simply will not seem to fall in line, and then just when you are about to give it all up and present your skates to the nearest corner urchin, you get it! It all seems amazingly simple then, figure skating is the most satisfying thing in the whole world, and you begin your next figure with a burst of confidence. That is how it should be. That is how it will always be as long as you glide on steel runners."

"You may not be able to do everything; but you will surely want to know everything. There is just one rule that seems to apply to every one of us who takes up the 'art sport' (as the newspapers are wont to call it), and that is: Once a skater, always a skater."

Those final words, once a skater, always a skater... Isn't that the truth? Thank you, Maribel, for allowing me a glimpse into your perspective through your words so many decades later. It was a privilege.

Skate Guard is a blog dedicated to preserving the rich, colourful and fascinating history of figure skating and archives hundreds of compelling features and interviews in a searchable format for readers worldwide. Though there never has been nor will there be a charge for access to these resources, you taking the time to 'like' on the blog's Facebook page at http://www.facebook.com/SkateGuard would be so very much appreciated. Already 'liking'? Consider sharing this feature for others via social media. It would make all the difference in the blog reaching a wider audience. Have a question or comment regarding anything you have read here or have a suggestion for a topic related to figure skating history you would like to see covered? I'd love to hear from you! Learn the many ways you can reach out at http://skateguard1.blogspot.ca/p/contact.html.
Posted by Skate Guard Blog at March 07, 2015
Email ThisBlogThis!Share to TwitterShare to FacebookShare to Pinterest
Newer Post Older Post Home