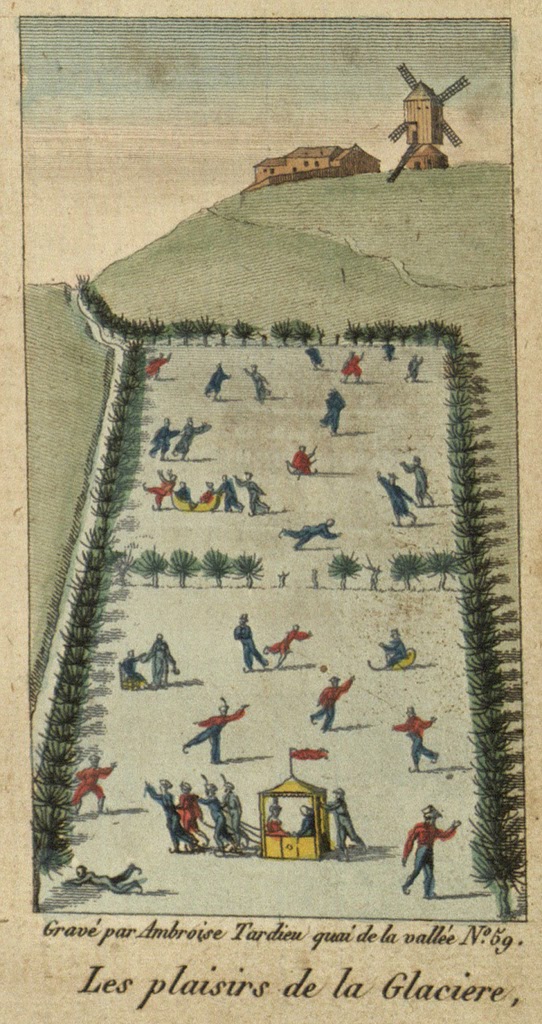 Grab your berets, baguettes, wine bottles and skate guards... because this week the blog will be featuring five back to back blogs taking a look at skating history in France! We start today by going back - way back - to Napoleonic France.

These days, not many instructional books on figure skating have a chapter on "the dangers of skating" providing advice on what a safe temperature of ice to skate on is or how to pull yourself safely out of the water should you fall through, but 1813 was a different time and Napoleonic France was a different place. 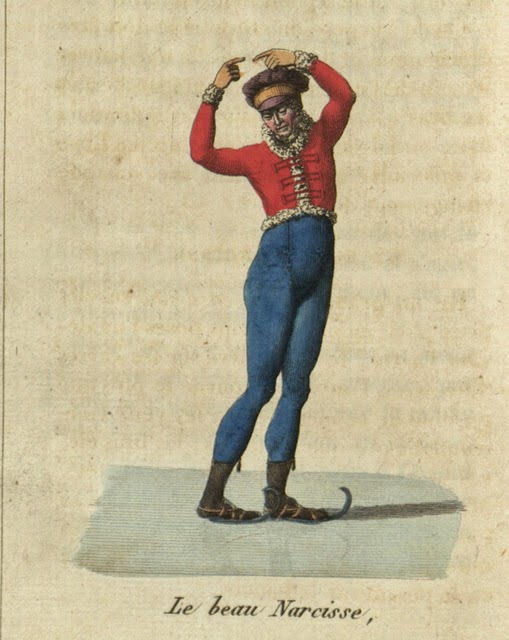 Over half a century before Jackson Haines revolutionized figure skating with his icy pilgrimage to Europe, France's Jean Garcin penned "Le vrai patineur, ou Principes sur l'art de patiner avec grâce (The true skater, or the art of skating with grace)". "Le Vrai Patineur" was an instructional book created in an effort to popularize ice skating - ice skating with a little grace at that - to the French masses during a tumultuous time in gay Paris. It is considered to be one of the first books devoted entirely to figure skating in history, its predecessor being the British "Art Of Skating" book written by Robert Jones in 1772 and was developed as a result of Garcin's involvement in a skating fraternity known in France as the Gilets Rouge (red waistcoats) who emphasized artistry over athleticism when it came to venturing out on the ice. Their credo was artistic sophistication and Garcin's book was dedicated to Geneviève Gosselin, the premier dancer at the Academy Of Music in Paris at the time. Parisians of the era travelled in droves to the frozen fields outside of the city near Paris at the hamlet known as La Glacière (the Glacier, then near Gentilly) or to the Canal de l'Arsenal. Skating in France during that period was generally considered a 'gentlemen's sport'. Their female companions would sit in sleighs on the sidelines in sleighs and carriages designed like gondolas, as swans with wings abreast or as crocodiles with their mouths open and would join their male friends in between bouts on the ice at beverage tents pitched around the natural rinks for a nice stiff cocktail and perhaps... a good Christian cigarette. 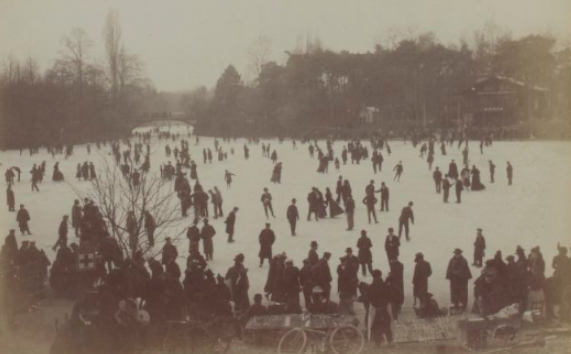 Skaters on the Bois de Boulogne, 1899

Later in the century, the best place to skate in France would be a private skating club within Napoleon III's own court called the Cercle des Patineurs, named after a pond constructed in a secluded portion of the Bois de Boulogne called "la pelouse de Madrid". The skating club was personally endorsed by the Emperor, who would host extravagant skating parties on the pond. French author Arsène Houssaye (who attended many of these skating parties) wrote in 1885 about the grand and very exclusive affairs: "One could imagine that the Marshals' Salon on the day of a ball had been magically transported to the Bois de Boulogne. The Emperor and the Empress, all of their esteemed court; the ministers, the ambassadors, their coterie from the Tuileries and Compiègne would all relocate themselves there, at times beneath the fog of three o'clock, at times under the evening stars accompanied by paper lanterns." In his 2003 essay "From place to espace: Napoleon III's transformation of the Bois de Boulogne", John S. Hopkins talked more about The Cercle des Patineurs and Napoleon III's interest in skating: "The Emperor's interest in skating spread throughout Parisian society, although the Cercle des Patineurs was off limits to most. Some people tried skating on the Grand Lac, but the depth of the water and successive mild winters often made that a dangerous proposition. The Cercle des Patineurs remained the best place to skate and the private haunt of the court. Indeed, within the international circles of high society, the complex earned the sardonic nickname, "chez les Happy Few." Further evidence of the private nature of the space may be found in the travel memoirs of Americans who frequented the Bois de Boulogne during the Second Empire. Accomplished world travelers such as Charles Warner, John W. Forney, and Junius Henri Browne reported at length on the tours des lacs and the races at Longchamps yet made no mention of the Cercle des Patineurs. Given the highly restricted nature of the place, it is likely that these foreign writers never saw it. Napoléon III's use of the Cercle des Patineurs transformed a simple skating club and pond into a space as private, exclusive, and official as any room in the Tuileries Palace." I think it suffices to say that Jean Garcin's efforts to popularize ice skating in France as an art and social activity paid off royally. 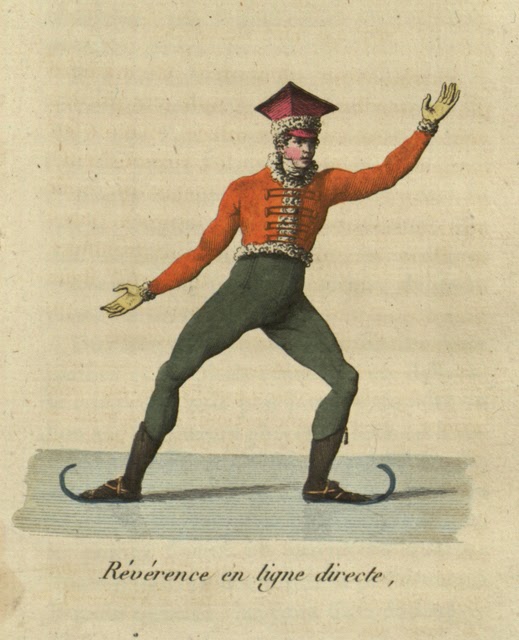 In his book, Garcin gives an account of the crowds gathered to skate at the Canal de l'Arsenal in the early 1800's: "men of every age and class were there, the most experienced competed in agility, whilst others clung desperately either to their neighbours or to their valets in an attempt to keep their balance." His illustrations and writings aimed to raise skating to the prominence of a serious art with its inspiration from dancing. He included a large number of 'steps' to which he gave names such as the Renommée (fame), the Saut du Zéphyre (the zephyr's leap) and the Pas d'Apollon (the step of Apollo) and the Roi de Rome (King of Rome). Unlike Jones in "Art Of Skating", Garcin placed equal importance on skating forwards and backwards and thus laid important groundwork for many of the figures skated in that day. 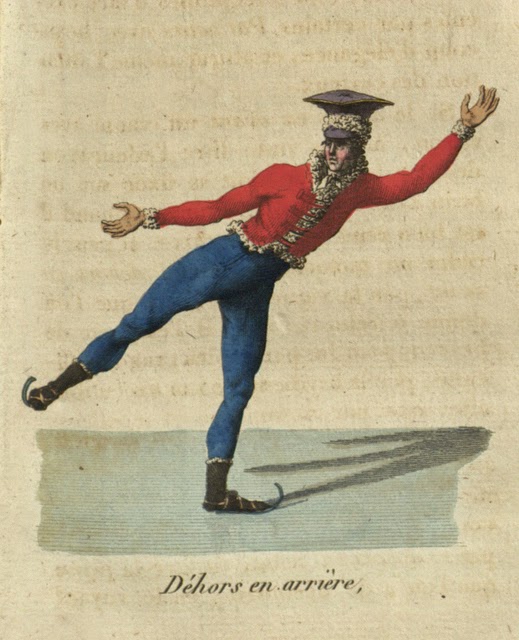 Garcin's book was praised in esteemed French novelist and playwright Honoré de Balzac's "Illusions Perdues" and served as important groundwork to the later efforts of Haines and many others who would effectively change figure skating from the 'old boys club' it was then to the balance of compulsory figures and free skating and later, the 'free skating only' sport that we marvel in today. It makes you sit back and ponder just where figure skating will be in another hundred years and what Garcin (and Napoleon III for that matter) would think of the twists, turns and twizzles figure skating has enjoyed so many years after "Le Vrai Patineur" was written. I find it fitting and to the credit of many of the wonderfully creative skaters that have been coming out of France for decades that as a result of Garcin and the Gilets Rouge's efforts, France adopted the term 'patinage artistique' for figure skating, which translates to 'artistic skating'. There's simply something very special about the connection the French people have with the ice and it started a long, long time ago.

Skate Guard is a blog dedicated to preserving the rich, colourful and fascinating history of figure skating and archives hundreds of compelling features and interviews in a searchable format for readers worldwide. Though there never has been nor will there be a charge for access to these resources, you taking the time to 'like' on the blog's Facebook page at http://www.facebook.com/SkateGuard would be so very much appreciated. Already 'liking'? Consider sharing this feature for others via social media. It would make all the difference in the blog reaching a wider audience. Have a question or comment regarding anything you have read here or have a suggestion for a topic related to figure skating history you would like to see covered? I'd love to hear from you! Learn the many ways you can reach out at http://skateguard1.blogspot.ca/p/contact.html.
Posted by Skate Guard Blog at May 24, 2015
Email ThisBlogThis!Share to TwitterShare to FacebookShare to Pinterest
Newer Post Older Post Home