That's The Way It Is: Skating To The Music Of Céline Dion 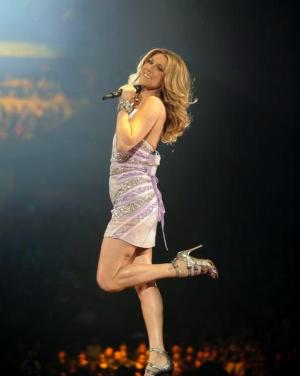 On her second English language album, Céline Dion debuted her song "Love Can Move Mountains". In the music video, she can be seen skating (on ROLLER skates) near Muscle Beach in California. Considering Céline's incredible popularity and influence on the music industry for decades, it's no surprise that her powerhouse voice has lended itself to many, many great figure skating performances. What better way to celebrate great skating and great music than to share five wonderful figure skating performances set to Céline Dion's music with you!

Using what is probably one of my absolutely favourite Céline songs as a backdrop, Emily Hughes dazzled skating to "Taking Chances" in this 2008 show. Featuring a nice triple toe-loop and double axel as well as a well-timed change edge spiral (who can go wrong with one of those?), I really think this is one of Emily's best programs and performances!

CARYN KADAVY - IT'S ALL COMING BACK TO ME NOW


In my February interview with Caryn, I asked her about this program, which to me is one of her most memorable. Caryn explained that "Brian Boitano invited me to do his Skating Romance show and I think it was Brian who picked out that song for me do at his event. I went to Connecticut to work with Lea Ann Miller and it all came together so fast with both of us working together on it. I loved Céline Dion, the program and the feel of the music. It was just a good combination of passion and was just skateable - it told a story. I think I do well if I FEEL the music and then it becomes more of a passion and a moment for me." This program certainly is a moment in every sense.

KRISTI YAMAGUCHI - THE POWER OF LOVE

Céline Dion's "The Power Of Love" is a classic and if anyone did it justice, it was Kristi Yamaguchi, although Rosalynn Sumners delivered an outstanding program to Jennifer Rush's version as well. Kristi had the jumps, the sensitivity to the music and choreography going on in every program she performed during her professional career, but I think "The Power Of Love" was such a wonderful reflection of her skating's wonderfully romantic side.

SASHA COHEN - TO LOVE YOU MORE

As Peggy Fleming commented during this performance, "there is one word for Sasha Cohen and that is exquisite". In this performance from the 2000 Keri Lotion Classic pro-am event, a fifteen year old Sasha interpreted Céline Dion's beautiful ballad "To Love You More". I remember someone skating to this in a show back in my own skating days and have always thought this piece of music was just stunning. The flexible spins and mean spirals are really the stars here... as often was the case with Sasha's skating. As always, Dick Button is right on the money when he says "she skates to the music. She also skates to more than just the music."

If this collection of skating divas skating to Céline Dion ballads doesn't already have you reaching for Kleenex box, you might want to take a cue from Dorothy, Rose, Blanche and Sophia and break out the cheesecake. This is an eating your feelings kind of blog. In all seriousness though, I saved this particular performance for last because I wanted to just fawn over it a little extra. I saw this live at Stars On Ice back in 2006 and I think it's one of Joannie's most special pieces. After she lost her mother Therese in Vancouver and went on to turn in not one but TWO courageous and phenomenal performances at the 2010 Olympics, she dedicated this program to her mother and this program couldn't have been more touching if it tried.

Skate Guard is a blog dedicated to preserving the rich, colourful and fascinating history of figure skating and archives hundreds of compelling features and interviews in a searchable format for readers worldwide. Though there never has been nor will there be a charge for access to these resources, you taking the time to 'like' on the blog's Facebook page at http://www.facebook.com/SkateGuard would be so very much appreciated. Already 'liking'? Consider sharing this feature for others via social media. It would make all the difference in the blog reaching a wider audience. Have a question or comment regarding anything you have read here or have a suggestion for a topic related figure skating history you would like to see covered? I'd love to hear from you! Learn the many ways you can reach out at http://skateguard1.blogspot.ca/p/contact.html.
Posted by Skate Guard Blog at June 23, 2015
Email ThisBlogThis!Share to TwitterShare to FacebookShare to Pinterest
Newer Post Older Post Home