Freddie Tomlins And The Nazi Watch 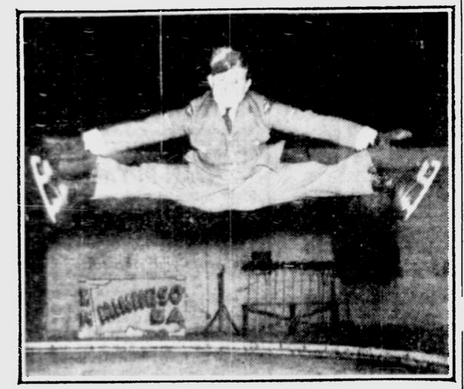 There's something about jewelry and accessories and British men's skaters of the thirties. Back in February, we looked at the unusual story of 1935 World Silver Medallist Jack Dunn and a supposedly cursed ring. Today on the blog we're going to explore an equally bizarre story involving a Briton who too was a World Silver Medallist in the thirties and a watch. Coincidence? You tell me.

Freddie Tomlins was a 1936 Olympian, European and World Silver Medallist in 1939 known for his speed and power and was by all accounts quite a jumper for his era. He also at one point held a speed skating record for the two hundred and twenty yard distance in Britain. Shortly after winning his medals in European and World competition, Tomlins enlisted with Britain's Royal Air Force, first as a truck driver before serving as an air gunner in the tail of a big British bomber in raids over Germany. He then came overseas for further training in aviation in Canada at a pilot school in Ontario. While brushing up on his flying skills, Tomlins was afforded several leaves to perform in skating shows in North America, including a charity show in Oakland, California in December 1941 and the Minto Skating Club's Minto Follies show in March of 1942. 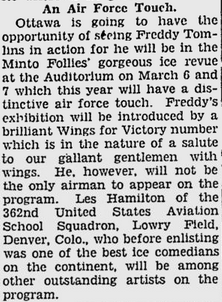 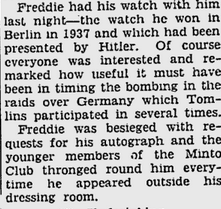 After finishing fifth at the 1937 World Championships in Vienna, a seventeen year old Tomlins travelled to Germany and competed in an international competition at the Berliner Sportpalast. He won the gold medal, defeating Horst Faber and the rest of the Germans entered. While in Berlin, Tomlins was personally presented with an eighteen carat gold watch by none other than HITLER himself (who he met three times during his skating career) inscribed in German with the words "To our dear Freddie Tomlins in remembrance of his skating in the Berliner Sports Palast, March 29 to April 4, 1937". The Nazi leader's words to Tomlins? "Great sport like this will unite the nations". Reading that quote almost made me throw up a little in my mouth.

The watch Hitler gave to Tomlins served both a practical and symbolic purpose. A March 5, 1942 article in The Ottawa Citizen speculates that "during the long dark hours as his plane sped on its dangerous mission, he must have smiled with deep satisfaction at the gold watch on his left wrist to learn how time was passing. For in these flights over enemy territory he felt he was being given a chance to repay the donor of the watch. Freddy, although he would not be without the watch for anything has no love for the giver, who was no other than the hated little paperhanger with the toothbrush moustache, the arch-criminal himself, Adolf Hitler." In a December 19, 1941 article in The Spokesman-Review, of the watch Tomlins was quoted as saying "That will come in handy one of these days! It is just right for timing the release of the bombs."

In case it all sounds too familiar, Tomlins' story was featured briefly before on the blog but certainly with no mention of this watch or in great detail. The ultimate irony is that the watch given to the future pilot officer by the Nazi leader himself did him absolutely no good. While fighting a German submarine, Tomlins was killed over the English Channel on June 20, 1943. Was it fate, bad luck or another curse? We'll never know... We do know that a talented skater who could have gone on to achieve even more had he survived the war was lost in 1943 and turning back the hands on a watch can't bring him back.

Skate Guard is a blog dedicated to preserving the rich, colourful and fascinating history of figure skating and archives hundreds of compelling features and interviews in a searchable format for readers worldwide. Though there never has been nor will there be a charge for access to these resources, you taking the time to 'like' on the blog's Facebook page at http://www.facebook.com/SkateGuard would be so very much appreciated. Already 'liking'? Consider sharing this feature for others via social media. It would make all the difference in the blog reaching a wider audience. Have a question or comment regarding anything you have read here or have a suggestion for a topic related figure skating history you would like to see covered? I'd love to hear from you! Learn the many ways you can reach out at http://skateguard1.blogspot.ca/p/contact.html.
Posted by Skate Guard Blog at July 28, 2015
Email ThisBlogThis!Share to TwitterShare to FacebookShare to Pinterest
Newer Post Older Post Home
"As a rule an author has one or two popular ways of contrasting the past with the present. He can treat the past as lying in comparative doleful ignorance, or he can explain that the past was infinitely superior to the day we live in. Of course, either method is the popular journalism of the moment, and in reality there is no sharp contrast, but a gradual transition which leads the past into the present." - Joel B. Liberman, Skating Club Of New York