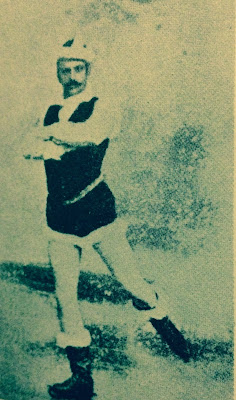 When it comes to studying the history of competitive figure skating, 1882 was an incredibly important year. As we briefly explored in the 2013 Spotlight On Jackson Haines, that winter marked the first big international figure skating competition. In looking at this event, I want to start by revisiting the information from that 2013 blog: "Haines also took on the role of a teacher, coaching many early stars of the sport in his travels, including Leopold Frey of Austria, the winner of the first recognized international figure skating competition, 'The Great International Skating Tournament' in Vienna in 1882, after Haines' death. Though Frey won that event, interestingly the third place finisher was Norwegian speed skater Axel Paulsen, who arrived from Christiana (now Oslo) to compete, debuting the axel jump he invented during the 'special figures' component of the competition. Haines and Paulsen had previously met in Norway and Haines had at that time encouraged him to adapt his athletic axel jump which he first performed on speed skates to figure skates. Axel conceived of adding a pick to the front of his figure skates, had one welded on and was then able to land backwards easily. At that competition in 1882, England's Henry Boswell observed that new toe pick and took the invention back to England where he designed and manufactured several pairs of similar skates. So without that timely connection between Haines and Paulsen years before, we may never have had the axel, free skating OR figure skates. Exactly ten years later, in 1892, the Internationale Eislauf Vereinigung (International Skating Union) was formed, with rules for international competition established five years later."

So there's what we have already covered... and now I want to share some more detailed information I came across with regard to this particular competition that really illustrates its historic significance and how it influenced the direction skating competitions would take. For that we turn to this lengthy excerpt from Nigel Brown's unfailing 1959 book "Ice-Skating: A History": "It was during this first big international competition in Vienna in 1882 that a very important decision was made concerning the direction of the development of skating art. The special-figures section which afforded the competitors the opportunity of showing their proficiency and brilliance in movements other than the basic figures, produced on this occasion a mixture of free-skating combinations and figure designs. Headed by the winner, Leopold Frey, the majority of competitors followed the true idea of skating art and presented a number of elegant movements joined together to make a whole, a special figure as it was then called. Leopold Frey linked an outside spread eagle to a back outside eight and terminated on a Jackson Haines sitting pirouette. Axel Paulsen performed only one movement in presenting an outside forward three jump with one and a half revolutions landing on the left backward outside. This jump was to become the most famous jump in the free-skating vocabulary. Heinrich Jokl used the Grape-vine, linking it with a loop and a three. All these were skating movements, pieces of free skating. But Theodor Langer presented in this section a filigree design of a four-point star. It was a figure design upon the ice, an advanced idea of continuous skating, skated throughout upon one foot; and although it needed the basic skating figure of change of edge, forwards and backwards linked with cross-cuts, the figure had to be performed in such a jerky fashion with the skater's eyes glued upon the ground, and his body often in an ungainly position, that it was opposed entirely to the idea of skating art, It was anti-skating, yet the drawing left upon the ice was greatly attractive, symmetry being very near perfect... The presentation of this type of skating by Langer put the judges in somewhat of a quandary. The design drawn upon the ice by him was unquestionably attractive, but the manner in which it was created was not skating art. Furthermore, it was impossible to determine the superiority of a figure like this with real free-skating combinations, when there was no common measure of comparison. Nevertheless the judges gave the first three places to exponents of free-skating movements although the brilliance of Langer's four-pointed star left an indelible impression on them, the public and particularly the skaters competing." 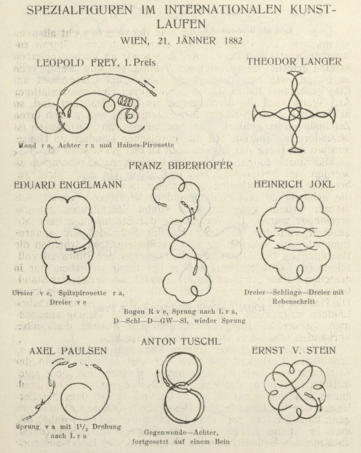 The medallists at that 1882 event were of course Frey in first, followed by fellow Viennese skater Eduard Engelmann Sr. and Norway's Axel Paulsen in second and third place. Among several others competing, there was a young skater from Drontheim named Anne, Paulsen's twin brother Edwin and Carl Werner of Christiana, who was a close speed skating rival of Paulsen and both hearing and vision impaired. No British skaters competed, although three did sit on the judging panel which was presided over by Alexander, Prince of Erbach-Schönberg and Baron Rothschild. I was thrilled to come across this gem of a primary source, a first hand account from an unnamed correspondent in "Our Vienna Letter" dated January 26, 1882 and published in the Sydney Morning Herald: 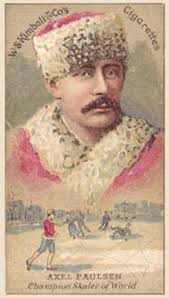 "The contest began with skating the whole 'school' of figures from the simplest to the most complicated, and in this the foreigners did not take part, there having been little time and no ice to practice on. With the thermometer at 5 degrees Réaumur over freezing point, the most interesting part of the contest commenced, that in which every skater proved his skill by a figure of his own invention, to last four minutes in the execution. The tribunes, decorated with draperies, flags and garlands of fir branches, began to fill, and two archdukes came in a good time to witness the interesting performance, which was accompanied throughout by the gay sounds of a military band. The public applauded furiously when Axel Paulsen at the end of a figure jumped backwards to a considerable distance, and then finished with a pirouette which looked like something turned round by the whirlwind. Leopold Frey, of Vienna, skated an enormous double snake in the unaesthetic but difficult position of the legs usually designated as half-moon. Engelmann, of Vienna, executed a very difficult combination of circles and arches, ending with a pirouette differing only from Paulsen's only by being skated on the point of the skate. Half a dozen more skaters followed with performances of great merit, but which could not vie with the three just described. More figure 2 skating followed, and then two professionals competed for the prize assigned for such only. The conclusion was made by a general performance of all the first-rate skaters at once during which the public witnessed so much art and grace, that the applause was unceasing. The jury withdrew for an hour to decide who were to be the winners, and then, the seven electric lamps having been lighted, the distribution of prizes began. A very pretty girl, the best skater in Vienna, who is inimitable when she dances a valse on skates, performed the pleasant duty of presenting the prizes. The first prize was a silver statuette of the famous skater, Jackson (Haines), modelled by Vienna's best portrait sculptor, besides a gold medal of 500 francs, awarded to Mr. Leopold Frey, of Vienna; the second a gold medal with 400 francs, awarded to Engelmann, also of Vienna; the third a gold medal, with 300 francs, awarded to Axel Paulsen, of Christiana." 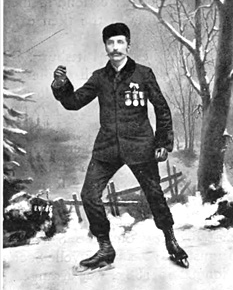 Lots of interesting tidbits in this first hand account! As compared to Brown's recounting of the event, I found it quite interesting that in this particular account, the impact of Langer's special figure was curiously omitted. Also, the fact that all three skaters received gold medals - not gold, silver and bronze - as well as prize money, is of great interest. Equally interesting in this 1882 source is mention of a sixteen hundred meter speed skating race held the following day in conjunction with the event. Axel Paulsen, one of the world's top speed skaters, was unsurprisingly the winner by two hundred and twenty five meters, followed by Anne and Werner. Axel's brother Edwin won a secondary 'omnium race' and prizes for this second day of competition included "a gold chronometer, together with a gold goblet crowned by the miniature figure of a skater, silver beer cane, and gold medals." The weather on the second day was apparently "unfavourable throughout, and the ice so soft that one skater broke it and fell knee-deep into the water." As a result, further planned events including a steeplechase on ice and fancy dress ball on ice were cancelled, much to the disappointment of members of the Vienna Skating Club. Following the competition, a banquet was hosted by Prince Schönberg and Baron Rothschild at the Hotel Metropole where skaters and dignitaries alike made speeches in admiration of the wonderful skating at the event. 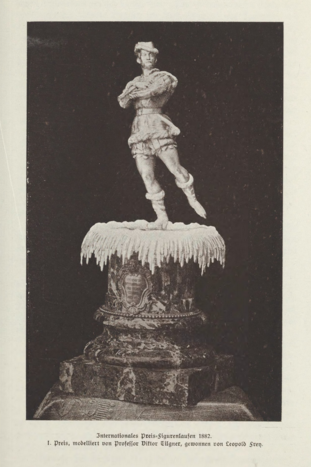 I have to say how fortuitous it was for me to really stumble on both of these wonderfully detailed accounts of this largely forgotten milestone from the long distant skating past because honestly... this wasn't an event I ever dreamed I'd be revisiting on the blog because the materials just didn't seem to present themselves. It only goes to show you that much like the impact of this competition on developing the future of free skating, things seem to happen as they are meant to sometimes.

Skate Guard is a blog dedicated to preserving the rich, colourful and fascinating history of figure skating and archives hundreds of compelling features and interviews in a searchable format for readers worldwide. Though there never has been nor will there be a charge for access to these resources, you taking the time to 'like' on the blog's Facebook page at http://www.facebook.com/SkateGuard would be so very much appreciated. Already 'liking'? Consider sharing this feature for others via social media. It would make all the difference in the blog reaching a wider audience. Have a question or comment regarding anything you have read here or have a suggestion for a topic related figure skating history you would like to see covered? I'd love to hear from you! Learn the many ways you can reach out at http://skateguard1.blogspot.ca/p/contact.html.
Posted by Skate Guard Blog at July 08, 2015
Email ThisBlogThis!Share to TwitterShare to FacebookShare to Pinterest
Newer Post Older Post Home
"As a rule an author has one or two popular ways of contrasting the past with the present. He can treat the past as lying in comparative doleful ignorance, or he can explain that the past was infinitely superior to the day we live in. Of course, either method is the popular journalism of the moment, and in reality there is no sharp contrast, but a gradual transition which leads the past into the present." - Joel B. Liberman, Skating Club Of New York