Trials And Tribulations: The Storied Lives Of Eva Pawlik And Rudi Seeliger 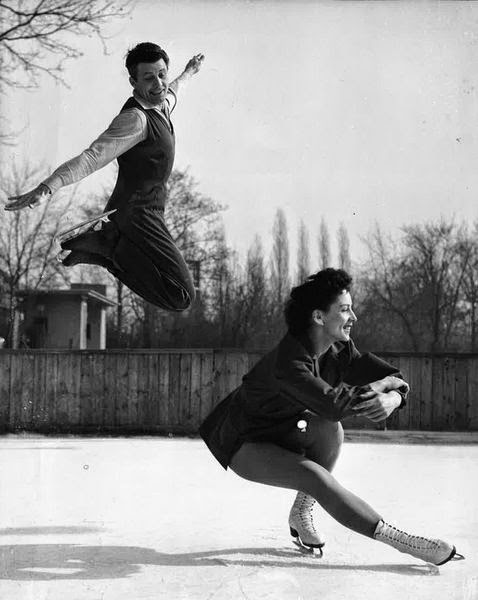 A skater's life has rarely been considered an easy one, whether in present day or the distant past. Early morning practices, injuries, exhaustion and pressure up the wazoo hardly always make the lives of the sport's elite the cakewalks an outsider of the sport might suppose. That's nothing we as those who endear themselves to the sport don't know though. That said, some have really had a rough go of it along the way... and two that certainly come to mind are 1948 Olympic Silver Medallist Eva Pawlik and her pairs partner and husband Rudi Seeliger. I must credit Esther Pierce for the idea of writing about these two for after sharing some great video of the 1949 World Championships I'd stumbled upon it was her that directed me to some wonderful material that talked in detail about Pawlik and Seeliger's careers... and trials and tribulations.

Viennese skater Eva Pawlik was widely known as somewhat of a child prodigy. She was landing an axel at age four and performing in shows as part of a touring act called "The Fairy Tale Of The Steady Tin Soldier" with two time World Champion Felix Kaspar as a mere child. Following in the footsteps of other great Austrian ladies skaters like Fritzi Burger and Herma Szabo, Pawlik was Austria's new rising skating star and everyone was certainly paying attention.


Right off the bat, things didn't go as planned. The Anschluss Österreichs in 1938 where Austria was basically absorbed into Nazi Germany meant a change of career trajectory for Pawlik and her pairs partner Rudi Seeliger. There was no Austria so there were no Austrian Championships. Instead, skaters competed in 'the Ostmark Championships', which Pawlik and Seeliger won in 1942. With the 1940 Olympics cancelled and no European or World Championships to advance to that year, both Pawlik and Seeliger's pairs career and Pawlik's singles skating were basically put on a forced hiatus. The international gold medals would simply have to wait for both promising young skaters.

As if that wasn't enough to take the wind out of anyone's sails, Seeliger was drafted into the German army. While in service, he was captured by the Red Workers' and Peasants' Army and was forced to work as a slave in a coal mine until he returned to Austria in 1949. In the meantime, Eva was partnerless and left to pick up the pieces of her skating career and carry on. While her pairs partner toiled as a slave of war, she returned to competition after World War II ended, winning four consecutive Austrian titles ahead of rivals like Inge Solar and Hilde Appeltauer (future coach to 1972 Olympic Gold Medallist Trixi Schuba). In 1948, she returned to international competition, winning the silver medal at the European Championships, Winter Olympics and World Championships that year. Sandra Stevenson's 1984 book "The BBC Book Of Skating" states that "when Eva Pawlik of Austria unsuccessfully challenged Barbara Ann Scott in 1948 one reason given for her failure was that she skated with dirty boots and holes in her tights. The boots were so old that they no longer responded to cleaning and the holes were darned. It was the best she could manage with all the shortages in her country."


Although Pawlik and Seeliger were reunited in 1949, Eva continued to focus on her singles career at the time with a World title not an unreachable goal by any stretch of the imagination. Bad luck again befell the young star though. She suffered a serious bout of acute appendicitis that almost forced her to withdraw from the 1949 European Championships but still managed to defeat Ája Vrzáňová to take her first and only European title. That year at the World Championships, things again did not go in her favour. A close second to Vrzáňová after the school figures, Pawlik (who had defeated the Czech star by three places at the World Championships in 1948) was in very real contention to snatch the gold. However, one of the heels on her skates mysteriously broke at those World Championships in Paris prior to the free skate. She was not allowed to continue using borrowed skates, which seems so silly now considering what happened at the 2008 Worlds with Brent Bommentre's lost luggage. I've always believed in the old theatre adage "the show must go on" personally. But I digress... Pawlik was forced to withdraw and decided to instead turn professional and make some money as her family certainly could have used some financial support after going through... I don't know... a war?! I think that's a pretty good reason. I don't know about you.


It was certainly a tragic end to an "amateur" career: for a skater who had faced so many challenges through her career because of World War II to end a career with a big old slap in the face when a title was within her grasp. Things drastically improved after 1949 for Pawlik and Seeliger though. They'd reunited both on and off the ice, teaming up again to skate together in shows with the Vienna Ice Revue and Scala Eisrevue for a good decade after Rudi made his own brief return to ISU competition to win the 1950 Austrian pairs title with Susi Giebisch. Seeliger and Pawlik didn't just reunite as a pairs team, they also got married! After their professional careers ended, Pawlik worked as a skating commentator for television and later as a schoolteacher. Both husband and wife passed away in 1983.

I feel like I'd be remiss not to direct you to the wonderful website that Esther directed me to that provided much of the background and source material for this article - an Eva Pawlik fanpage maintained by the couple's son Dr. Roman Seeliger brimming with amazing photographs and quotes about primarily Eva's career but also offering some great material regarding her pairs career with Seeliger. You really have to check it out! That said, I have to be close by saying in this instance how happy it makes me that these two found each other again and were able to rekindle that magic on and off the ice. It's really a wonderful story of perseverance and obvious love of skating that brought them back together and if that doesn't warm your heart, maybe another cocktail is in order.

Skate Guard is a blog dedicated to preserving the rich, colourful and fascinating history of figure skating and archives hundreds of compelling features and interviews in a searchable format for readers worldwide. Though there never has been nor will there be a charge for access to these resources, you taking the time to 'like' on the blog's Facebook page at http://www.facebook.com/SkateGuard would be so very much appreciated. Already 'liking'? Consider sharing this feature for others via social media. It would make all the difference in the blog reaching a wider audience. Have a question or comment regarding anything you have read here or have a suggestion for a topic related figure skating history you would like to see covered? I'd love to hear from you! Learn the many ways you can reach out at http://skateguard1.blogspot.ca/p/contact.html.
Posted by Skate Guard Blog at July 13, 2015
Email ThisBlogThis!Share to TwitterShare to FacebookShare to Pinterest
Newer Post Older Post Home