Is That All There Is To A Circus? 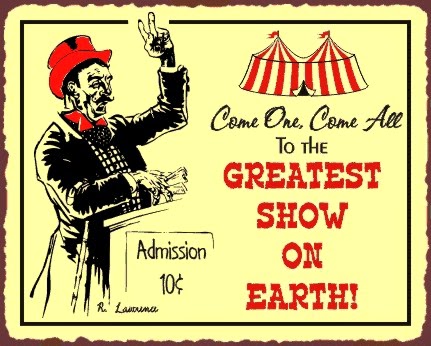 "And when I was twelve years old, my daddy took me to the circus,
The greatest show on earth
There were clowns and elephants, dancing bears
And a beautiful lady in pink tights flew high above our heads
As I sat there watching
I had the feeling that something was missing
I don't know what
When it was over I said to myself,
Is that all there is to the circus?"

- from Peggy Lee's "Is That All There Is?" written by Mike Stoller and Jerry Leiber

If there's one thing that studying figure skating has taught me, it is to be prepared for the unexpected. Given that I "grew up" in the sport in the mid to late nineties when skating so saturated the entertainment market that tank ice shows could be found everywhere from casinos to tourist attractions like Sea World and Busch Gardens, the concept of skating having connections with the circus didn't really phase me that much. What DID surprise me was exactly how far back that connection went.

Australian born illusionist Harry Cameron was born in 1881 and made quite a name for himself as The Great Carmo, touring with circuses and variety shows in Australia, France and the U.S. before planning a trip to Great Britain to develop a troupe and circus there. He almost didn't make it. The Big Apple Circus' "Circopedia" explains "The Great Carmo - as he was henceforth to be known - and his girl-assistants were ready to return to England, and they tried to book passages on the Cunard liner Lusitania, which was sailing from New York on May 1, 1915. Although cabin accommodations were available, there was no space in the hold for Carmo's huge amount of stage and magic props, and he had to wait for a later ship. It was a lucky strike: This was to be Lusitania’s last voyage; she was torpedoed by a German U-Boat off the coast of Ireland on May 7, an event that led the United States to declare war on Germany." Pretty incredible stuff. Cameron opened The Great Carmo Circus in Balmoral Gardens in Belfast, Northern Ireland in the summer of 1928. His show featured a horse trainer named Emmerich Ankner, a Japanese juggler known as Togo, Conrad's Bears, an elephant named Baby June and twelve lions. Menageries (which we visited in The Tower Of London blog) were also important parts of circuses at the time and Carmo's Circus featured a menagerie of animals as well. He took the circus on tour and by the following summer was in Gatford, London with aerial artists, acrobats, Belgian clowns, a perch-pole act and figure skaters added to his growing line-up. 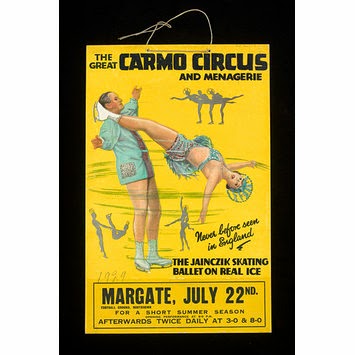 The skating act was The Jainczik Skating Ballet On Real Ice and opened in July of 1929. A hanging card designed by Leon Crossley advertising the skating circus act informed that the Jainczik Ballet was held on the Football Ground at Northdown for "a short summer season" and that shows were held twice daily at 3 PM and 8 PM on "real ice". Alfred Jainczik was a German figure and roller skater who four years after performing with The Great Carmo Circus patented an improvement to roller skates. Sadly, The Great Carmo Circus floundered with tent and weather problems and in late March of 1930, the big tent burned to the ground and several animals were badly burned during the catastrophe. He attempted to keep his circus going at of all places a SKATING rink in West Bromwich but the financial loss he suffered caused The Great Carmo Circus to close its doors. The following year, Cameron opened Carmo's Colossal Circus at The Hippodrome but by then, he'd replaced the ice skating ballet with a roller skating duo called The St. Moritz Skaters. We do know that Alfred Jainczik left England aboard the Normandie liner in 1937 bound for New York, advantageously getting out of Europe before World War II broke out. He then toured with the Ringling Bros. Circus in the U.S. for a time.

Other circuses also staged ice skating shows but none were perhaps as popular as Moira Orfei and Walter Nones' Italian Circo Sul Ghiacco (Circus On Ice) show which opened in 1969. It included a circus ring and skating show in one venue and was known for its use of elaborate sets, props and costumes. After separating Orfei's show from the Circus On Ice show in 1976, the actress Orfei at one time was involved in the ownership of Holiday On Ice.

Today, ice acrobats, skating bears, fire and hula hoop acts remain some of the most sought after novelties for both traditional and non-traditional skating and variety shows and without the unconventional pioneering efforts of people like The Great Carmo, Alfred Jainczik and Moira Orfei, the unseeming might have easily remained relegated to 'the impossible'.

Skate Guard is a blog dedicated to preserving the rich, colourful and fascinating history of figure skating and archives hundreds of compelling features and interviews in a searchable format for readers worldwide. Though there never has been nor will there be a charge for access to these resources, you taking the time to 'like' on the blog's Facebook page at http://www.facebook.com/SkateGuard would be so very much appreciated. Already 'liking'? Consider sharing this feature for others via social media. It would make all the difference in the blog reaching a wider audience. Have a question or comment regarding anything you have read here or have a suggestion for a topic related to figure skating history you would like to see covered? I'd love to hear from you! Learn the many ways you can reach out at http://skateguard1.blogspot.ca/p/contact.html.
Posted by Skate Guard Blog at August 16, 2015
Email ThisBlogThis!Share to TwitterShare to FacebookShare to Pinterest
Newer Post Older Post Home
"As a rule an author has one or two popular ways of contrasting the past with the present. He can treat the past as lying in comparative doleful ignorance, or he can explain that the past was infinitely superior to the day we live in. Of course, either method is the popular journalism of the moment, and in reality there is no sharp contrast, but a gradual transition which leads the past into the present." - Joel B. Liberman, Skating Club Of New York