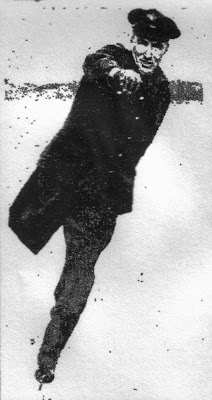 The son of Judith (Heins) and Clinton Tully Talkner, Norman Arthur Falkner was born March 29, 1894 in Saskatoon, Saskatchewan. He learned to skate as a young boy at the turn of the century on a frozen pond and began his adventures on the ice as a member of his church's hockey team. He gave up hockey when his father died in 1908 of typhus and he was forced to take on a job as a messenger delivering freight notices to help support the family. In the afternoons, he'd spend his little free time skating on a recently finished covered rink. He quickly found success on the ice, winning both the boys and mens speed skating races held in 1909 and 1910 in Saskatoon. In 1910, he turned his attention to figure skating. Ruth Millar's book "Saskatchewan Heroes And Rogues" explains "he delighted in figure skating, but it 'almost made an outcast of me', he wrote. His take on it was not that figure skating was sissy, but that others thought the sport was 'for aristocrats and... a boy who had to work instead of attending school, was no aristocrat. But Norman stuck with it. He taught himself figure skating by reading books on the subject and became quite expert at it." Norman taught himself both school figures and free skating as well as barrel jumping and took up pairs skating as well with partner Edith Findley. Both skated singles and pairs programs in carnivals in neighboring towns and villages but fitting with his feeling of being treated as an outcast, he was never invited to exhibit his skating at his own home rink.

Norman was enlisted in the army in 1916 and joined the 96th Battalion, later transferring to the 21st Battalion. After six months of serving in France, he was wounded on the front lines in Vimy and complications necessitated the amputation of his right leg at mid-thigh. Military records from the 21st Battalion state that the wound was caused by shrapnel and the amputation was required after infection set into the Lens area. An October 24, 1980 article in the "Toronto Star" that included an interview with him stated that the shrapnel was from an exploding shell and it had cut through major arteries.

Norman was invalided back to England where a final operation was performed on his leg and his grandmother arranged for him to convalesce in Selby Hall, a private estate that was opened for injured soldiers. There was a small lake on the property that froze in the winter and determined not to be phased by the recent amputation of his leg, he sent for his skates and took to the ice. In his diary, he wrote, "Consider a man with only one leg, who finds himself with a good skate on, with nothing to take hold of for many yards in all directions. There is no reason why he should fall forwards or backwards, because he has the support the length of his foot or skate, and can adjust the weight over the toe or heel by the slightest ankle control... The greater part of this will be to overcome gravity, but the smaller part, in direct proportion to the amount his centre of gravity has moved away from the perpendicular and towards the horizontal, will be used for travel in the direction he started to fall. At that point he must turn the skate more or less into that direction. The skate will glide on the ice easily and likely travel in the falling motion and the skate may not yet be on a traveling balance. By repeating the action, however, it can be achieved, and he will be skating... A thrust with the skate on the ice, followed by a glide on the skate will accomplish this... The would-be skater persists and modifies the straightening of the knee and the amount he turns the skate in the initial effort and in successive ones, he will travel where he wants to..." You see that for Norman great thought was put into how he would achieve his goal of skating again and with mind over matter, he most certainly succeeded. It wasn't without falling repeatedly or being discouraged by his nurses, but he was fiercely determined. 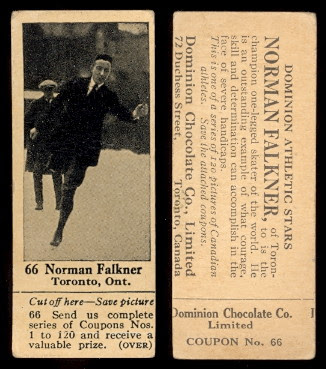 Norman left Selby Hall and was fitted with a temporary peg leg before receiving an artificial leg in Whitby, Ontario. He actually barely escaped death again on the way back - the hospital ship he returned on (HMHS Llandovery Castle) sunk on its return trip to England after being torpedoed by a German U-Boat. Only twenty four people in one lifeboat who survived the shipwreck and subsequent machine gunning of survivors by the Axis survived. Ironically, the ship he had travelled TO Europe from right here in Halifax on (the SS Laconia) was also torpedoed and sank.

Upon returning to Canada and being fitted with an artificial limb, Norman took to the ice on a hockey rink in Calgary (minus his artificial limb) to skate and was invited to perform between intermissions at the rink's New Year's Day hockey game by the rink manager. Millar's book explained, "At intermission the manager announced that Falkner would skate one-legged. He had been skating for a full minute without a sound from the audience. Suddenly he fell and did a complete somersault, but recovered and leap back up in seconds. The audience applauded wildly. His brother later reported that the audience had been speculating on what gimmick he was using. Norman's fall removed any doubts as to the authenticity of his performance. He received fifteen dollars as payment, thus launching his professional career." 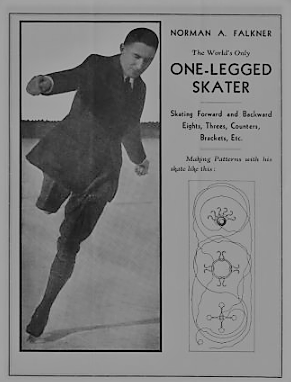 Norman was discharged from the military in 1919 and returned to Saskatoon to live with his brother. He found a hard time finding a 'day job' but was able to find twenty five bookings to perform his skating act professionally in carnivals throughout the Prairies that winter. Despite continuing to have issues finding and keeping steady jobs, skating continued to pay his keep. He returned to Ontario (where he had visited to be fitted for an artificial leg when he first returned to Canada) and skated three shows a week in the winter of 1920 there. From there, he took his skating act on the road and did two full tours - one of the Maritimes and one to Vancouver - as well as shows in Minneapolis, Duluth, Cleveland, New York City, Boston, Providence, New Haven, Montreal, Saint John, Edmonton and hundreds of other communities in the U.S. and Canada. The January 28, 1920 edition of "The Daily Times" stated, "He is now living at Toronto and has amazed crowds at a rink there by his wonderful feats on the ice. He seems to get leverage by bending his knee and throwing the weight of his body from side to side. He can go forwards or backwards at great speed and can cut out more fancy figures than the average two-legged skater."

Norman married his wife Helen and applied to the ISU for reinstatement, which finally happened in 1951 with the stipulation "he wasn't to enter any competitions". He became a certified figure skating judge and was also a founding member of the Weston Curling Club. After his wife's death in 1973, he penned a brief memoir which was presented to Toronto's University Skating Club along with his unused right skate. The Pat McNealy article sadly speaks of the poor care that he received later in life at Sunnybrook Medical Centre, when he was told at age eighty six to return in three weeks due to a hospital strike after suffering a series of dizzy spells resulting in falls. He passed away on April 27, 1985 in White Rock, British Columbia, having lived a full and active life well into his nineties.

To me, Norman'sstory is nothing short of inspiring. It's one thing to get back up after a fall but to return to the ice after losing one of your legs in the front lines of one of history's most gruesome wars... that's determination. I think back to my interview with Paul Binnebose and am reminded by his story and his words about getting back onto the ice in the face of literally life changing obstacles: "I never had any fear about going back to the ice. I have been a skater longer than I can remember. I was thrilled to go home." And so Norman returned as well to the place that was home for him... and though we we may well have not seen him perform, we still owe him a standing ovation.

Skate Guard is a blog dedicated to preserving the rich, colourful and fascinating history of figure skating and archives hundreds of compelling features and interviews in a searchable format for readers worldwide. Though there never has been nor will there be a charge for access to these resources, you taking the time to 'like' on the blog's Facebook page at http://www.facebook.com/SkateGuard would be so very much appreciated. Already 'liking'? Consider sharing this feature for others via social media. It would make all the difference in the blog reaching a wider audience. Have a question or comment regarding anything you have read here or have a suggestion for a topic related figure skating history you would like to see covered? I'd love to hear from you! Learn the many ways you can reach out at http://skateguard1.blogspot.ca/p/contact.html.
Posted by Skate Guard Blog at September 21, 2015
Email ThisBlogThis!Share to TwitterShare to FacebookShare to Pinterest
Newer Post Older Post Home