King Bat Of The Forest 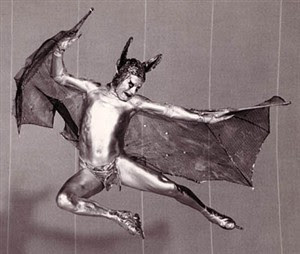 Early 1939 may have marked the very first appearance of the Bob Kane's Batman comic book character in print but the character has certainly been purported to have drawn inspiration from several sources, including the 1920 play "The Bat", the 1930 film "The Bat Whispers", Mary Rinehart's novel "The Circular Staircase", Leonardo da Vinci's diagram of an ornithopter and the Zorro character. I'd like to add one more to that list.

In 1936 at the Sports Stadium in Brighton, England an entertainment impresario by the name of Claude Langdon and the rink's general manager Denis Mitchell first presented an elaborate ice ballet called "Marina" that received rave reviews. The show, which would play to over two hundred and sixty thousand people in one hundred and thirty performances in Great Britain over the years, was named after Marina, Duchess of Kent, whose marriage was the talk of the time. Among its stars were Olympic Bronze Medallist and four time World Medallist Melitta Brunner and Red McCarthy, a Canadian speed skater, barrel jumper and professional skating star who was the father of three time Canadian Champion Norah McCarthy.

On My Brighton And Hove blog in 2003, Trevor Chepstow wrote that "one of the funniest acts, was performed by a Irish-Canadian gentleman called Red McCarthy. Billed as the world champion of barrel jumping, Red McCarthy would tear round the ice rink, frightening the life out the audience, whilst dressed as a King Bat and covered from head to toe in silver paint. The paint was compiled of powdered glass and silver nitrate, which under the lights produced an amazing glittering effect, thus emulating all the colours of the rainbow with startling results. It took him one hour to put on his make up and as long to take it off, the removal necessitating a steam bath and powerful sprays."


McCarthy's "King Bat Of The Forest" act became a signature that he used in years to come while touring with the Ice Capades. If you ask me, his painted appearance with those bat wings certainly offers quite an eerie and dramatic effect and the fact that he was performing unusual jumps while wearing speed skates certainly adds to the avant garde allure of this long forgotten act.


So there you have it, folks, just in time for Hallowe'en... Burt Ward who played Batman's sidekick Robin may not have been the only professional skating connection to the charismatic comic book duo of Batman and Robin. I would venture to say that Red McCarthy's King Bat, which appeared to audiences in England three years before the world was ever introduced to Batman, certainly makes its case to be at least added to the list of Batman inspirations.

Skate Guard is a blog dedicated to preserving the rich, colourful and fascinating history of figure skating and archives hundreds of compelling features and interviews in a searchable format for readers worldwide. Though there never has been nor will there be a charge for access to these resources, you taking the time to 'like' on the blog's Facebook page at http://www.facebook.com/SkateGuard would be so very much appreciated. Already 'liking'? Consider sharing this feature for others via social media. It would make all the difference in the blog reaching a wider audience. Have a question or comment regarding anything you have read here or have a suggestion for a topic related to figure skating history you would like to see covered? I'd love to hear from you! Learn the many ways you can reach out at http://skateguard1.blogspot.ca/p/contact.html.
Posted by Skate Guard Blog at October 08, 2015
Email ThisBlogThis!Share to TwitterShare to FacebookShare to Pinterest
Newer Post Older Post Home