Underhill And Martini: 6.0 Of Their Best Programs EVER! 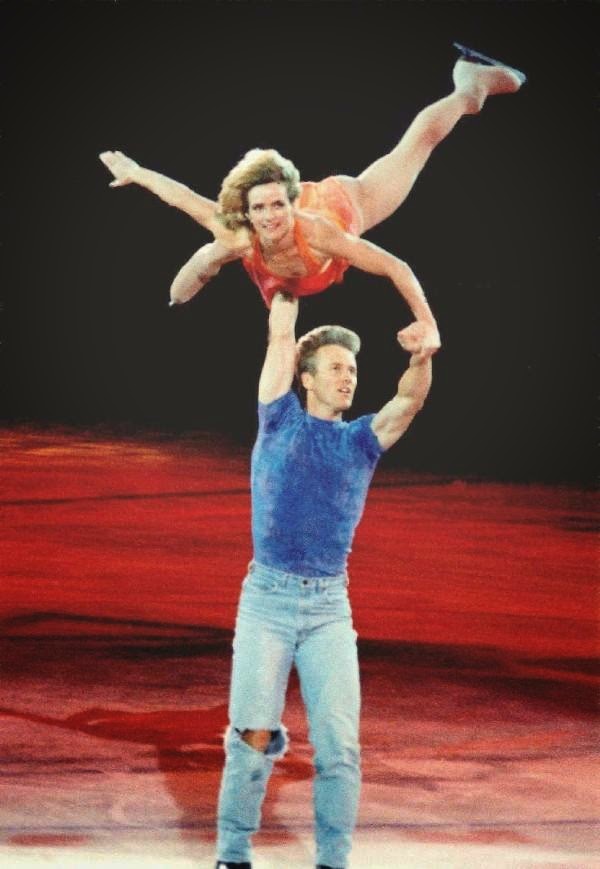 Trying to name 6.0 of 1984 World Champions Barbara Underhill and Paul Martini's best programs is like trying to name six of Julia Child's best recipes, six of Tracy Chapman's best songs or six of one of those football people's best touchdowns or home runs or whatever it is they do. I don't know anything about the team sports. I do know a thing or two about fantastic skating and as far as the marriage between music and movement and just simply beautiful pairs skating, Barbara Underhill and Paul Martini are two of the most talented and memorable stars the sport has ever seen. There's something larger than life about their skating that draws you in and something so authentic about their interpretations of music that puts you at ease and makes you completely in awe of their talent. Let's celebrate Barb and Paul by taking a trip down memory lane and enjoying 6.0 of their best programs! Grab yourselves a hot beverage (I sound like Sheldon from Big Bang Theory) and get ready for some great skating:

WHEN A MAN LOVES A WOMAN


During their professional career together which spanned well over a decade, Barb and Paul won a total of eight World Professional Championships titles - seven at the Landover event and one in Jaca - making them the most successful pairs team in the history of either event. One of their most memorable programs as a team actually came out of the 1989 World Professional Championships in Landover, where they skated to Luba's cover of Percy Sledge's "When A Man Loves A Woman". It became one of their trademark programs throughout their career. Radka Kovarikova explained that "when those two look at each other, everyone believes they are in love". Barb and Paul were themselves interviewed regarding their chemistry on the ice, which is absolutely evident in this and many of their pieces. Barb offered that "over time, we've been able to develop some sort of magic or chemistry on the ice and it comes through... it's a combination of putting on the music, dimming the lights and putting us out on the ice and it just kind of happens." Paul explained that lack of inhibition that comes from the disconnect between a dark stage and an audience you can't see: "It's you, it's the lights, it's the atmosphere, it's the music and it just goes from there". This Sandra Bezic program has got it all: that huge lateral twist and throw axel, that hair-dusting backwards death spiral and final lift where she dismounts and gets pulled through his legs... but more than anything, it has that certain intensity and chemistry that even Barb and Paul seem to have a hard time doing justice when describing.

NOT A DAY GOES BY

Mandy Patinkin's interpretation of Stephen Sondheim's "Not A Day Goes By" from "Merrily We Roll Along" couldn't have been a more fitting or dramatic musical selection for Barb and Paul's final performance together (aside from their brief reunion on the finale of the first season of Battle Of The Blades). I was fortunate enough to get to see them skate this program live on Elvis Stojko's tour and one thing that stands out to me about the choreography of this piece in particular is the different layout of where highlights that they often use are placed. The death spiral is earlier in the program as opposed to near the end. The lift is where you'd expect the throw... but that huge throw axel right into the leap of faith is indeed in there. The ending of the program, where they lock hands but drift in their own directions really reflects the symbolism of their 'farewell piece' and add to just how moving and effective this choreography is. Sensitive, substantial and beautiful.


"We'll never know how Stephanie got out the screen door, and pulled herself fifty feet across the patio stone, up a step, through the pool gate, and into our backyard swimming pool. In that one moment, our lives were completely and irrevocably shattered." Barbara Underhill wrote this when talking about the death of her daughter Stephanie Gaetz in a drowning accident in May of 1993. Barb and her husband later started the Stephanie Gaetz Keepsafe Foundation in honor of her daughter to help educate parents about childhood safety. "The first year was, and still is, a blur. I can't even find the words to describe that kind of pain. I felt like my heart and my soul had been ripped from me, and I had no idea how to get them back," explained Barb. To help work through the pain, Barb turned to the ice and performing and with Paul skated a tribute to her daughter to Michael Bolton's cover of The Beatles' "Yesterday". The piece resounds as one of the most moving programs the ice has ever seen. You'll need your Kleenex for this one.

ONE NIGHT WITH YOU/IT'S NOW OR NEVER


From their most emotional performance to one of their most lighthearted comes a look at Barb and Paul's tribute to the music of Elvis Presley. Skating to covers of The King's hits by Billy Ray Cyrus and Wet Wet Wet, Barb and Paul were tongue in cheek, sensual and even comedic in this larger than life program that can't help but make you smile from ear to ear every time you watch. It won the duo the 1995 Canadian Professional Championships and 1996 Legends Of Figure Skating Competition and was a fan favourite in shows. If you haven't seen this one before, get ready for an absolute treat!

HAVE YOU EVER BEEN IN LOVE?


Although there are many memorable programs that many would argue should be on this 6.0 list of programs instead of this particular one, I'd argue wholeheartedly that this piece to Peter Cetera's "Have You Ever Been In Love?" absolutely deserves to be included. It's one of their more introspective pieces but is just ablaze with raw energy and musicality - a perfect marriage between music and movement. The footwork out of the lateral twist just oozes dramatic effect; the lift with her arms straight out right after the leap of faith just commands your attention. This program is really ABOUT that dramatic effect that makes so many of their programs stand out in your mind.

Last and ABSOLUTELY not least on the list of 6.0 of Underhill and Martini's 'greatest hits' as it were is their signature program to the Oscar and Grammy nominated song "Unchained Melody", timelessly crooned by The Righteous Brothers. It's considered by many to be the quintessential love song and this program is considered by many to be one of the most romantic and seamless programs ever skated. What makes it so great? Let's talk about that for a minute. Well, for one... the choreography is just fantastic. Sandra Bezic outdid herself with this particular piece. The simplicity and strength shone and again, the use of highlights to accentuate the music is what makes pieces like this work. There is no rushing, there is no extraneous movement that we are questioning. Every edge and lift has its purpose in relation to the music. I remember Scott Hamilton commentating a professional event and saying of Rosalynn Sumners skating to "Hello Dolly!" something to the effect of "all she needs is a beaded gown and some big music and she can go out there and knock your socks off". A similar statement stands true for all of Barb and Paul's classic programs: sometimes less is much, much, much more. "Unchained Melody" is a superb example.

Skate Guard is a blog dedicated to preserving the rich, colourful and fascinating history of figure skating and archives hundreds of compelling features and interviews in a searchable format for readers worldwide. Though there never has been nor will there be a charge for access to these resources, you taking the time to 'like' on the blog's Facebook page at http://www.facebook.com/SkateGuard would be so very much appreciated. Already 'liking'? Consider sharing this feature for others via social media. It would make all the difference in the blog reaching a wider audience. Have a question or comment regarding anything you have read here or have a suggestion for a topic related to figure skating history you would like to see covered? I'd love to hear from you! Learn the many ways you can reach out at http://skateguard1.blogspot.ca/p/contact.html.
Posted by Skate Guard Blog at October 07, 2015
Email ThisBlogThis!Share to TwitterShare to FacebookShare to Pinterest
Newer Post Older Post Home
"As a rule an author has one or two popular ways of contrasting the past with the present. He can treat the past as lying in comparative doleful ignorance, or he can explain that the past was infinitely superior to the day we live in. Of course, either method is the popular journalism of the moment, and in reality there is no sharp contrast, but a gradual transition which leads the past into the present." - Joel B. Liberman, Skating Club Of New York