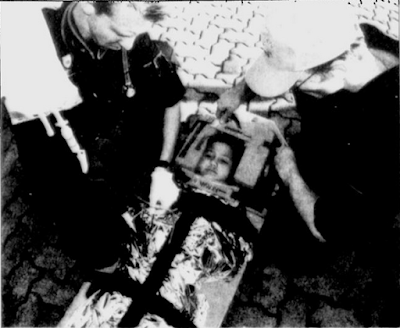 I remember how absolutely heart wrenching it was to write about The Hallowe'en Holocaust 1963 explosion and I certainly can only imagine how painful researching and writing about the 1961 Sabena Plane Crash must have been for Patricia Shelley Bushman when she penned "Indelible Tracings" and "Indelible Images". When you write about tragedy - even when it's something that has happened years ago - the human element of the story tends you reach out and grip you. Here's the thing about every tragedy though. The indomitable spirit of those who do survive and are involved in the rescue efforts always seems to remind us of the fact that no matter what cards life deals us or how much bad there is in the world, there are GOOD people out there.

On December 20, 2001, the Kolonnade Shopping Mall in a suburb of Pretoria called Montana in South Africa was packed with people doing their last minute holiday shopping. The mall's ice rink was teaming with young skaters and their parents celebrating their Christmas break with a much needed skate when seemingly seemingly inexplicably, there was a huge boom that sounded to many eyewitnesses like an earthquake. The two hundred and seventy square foot section of the mall's second floor and roof directly over the rink collapsed. Initially, fifty people were trapped in the rubble... including a nine-month old baby. The power failed and icy water made conditions even more unbearable for those trapped.

I want to give you a sense of just how scary things were for the skaters and their families that day. The December 21, 2001 edition of The Star-News explained that "Twenty-one people were seriously injured... 'It was much like the World Trade Center, dense dust and people running,' said Dr. George Michael Scharfs, who was near the rink with his wife and children when the second floor of the Kolonnade Shopping Center dropped onto the lower-level ice rink. Police said three people were hospitalized with critical injuries and eighteen others with serious injuries, including concussions and lacerations. Many more were cut by shards of glass from a shattered rink wall... Dr. Scharfs said he helped rescue a 2-year old girl pinned beneath a steel post... Parents frantically tried to dig their children out of the rubble. They were joined by about three hundred police and soldiers."

However horrific the scene at that South African day just months after the September 11 attacks in New York, the stories of everyday people to risked their own safety to help strangers on that day were every bit as awe inspiring. The December 21 edition of The Guardian shared some of those stories of bravery: "One 68-year-old man, Aubrey Welcan, who was playing bingo nearby when the roof caved in, helped pull two children out of the rubble. He told the South African Press Association (Sapa) the water was bitterly cold, and he could not see anything. 'It felt as if my feet would fall off,' he said. 'It was all dust. One could not see in front of you.' Marius Du Plessis rushed to the scene after hearing of the collapse on the radio. His 21-year-old son Morne was working in a clothing store near the ice rink. 'I have been trying to contact my son on his mobile phone, but there is only voice mail,' Mr Du Plessis told Reuters. Shiraaz Osman, who owned a shop above the rink, said he pulled his eight-year-old son Yusuf out moments before the roof collapsed. 'My son was on his way to the store. I saw the floor cracking and I rushed him outside. If it had been two minutes later we would have been in there,' said Osman. 'Outside, I hear a mega-loud bang and saw people running.' He said there was nothing left of his store. 'There is only water.' Dries Strydom said his two-year-old daughter and mother-in-law were sitting next to the rink when the roof fell on them. 'They did not know what happened. They just heard a loud bang.' The young girl was trapped for about an hour-and-a-half. Mary Kekane said her mother, sons, sister and niece were Christmas shopping when the roof collapsed on them. 'As result of the impact, they told me, they fell to the bottom floor.'" The Kekane's were freed by emergency personnel although Mary Kekane's young daughter had a nasty gash on her forehead and her mother suffered a back injury. The injury toll by the end of it all climbed to between forty five and fifty, depending on which accounts you read.

Although miraculously no one died in the Kolonnade Shopping Mall rink collapse, it was later revealed by the Tshwane City Council that an occupational permit had not been issued for that section of the mall but they had it up opened two months before the disaster anyway. The fact that the wrong steel was used and the rink's main supporting girder gave way was the determined as the ultimate cause of the accident. In eProp Commercial Property News, South African Institution Of Civil Engineers President Ron Watermeyer reflected on the bigger picture of the 2001 disaster (which ironically wasn't the ONLY similar incident at that time): "I would venture to suggest that South Africa's buildings are only as safe as is the competence and integrity of the engineers entrusted to certify compliance with the national building regulations. In South Africa, the tendency has been to confuse competence with professional registration. Professional registration is intended to manage integrity and to recognise the attainment of minimum standards of education and training and an ability to work independently. It does not assess competence to verify that a building complies with performance-based building regulations."

Regardless of who or what was to blame, the fact that everyone managed to make it out of that rink that day alive is really nothing short of incredible. Freak things happen in this world and we never know when they will... but how we respond and how we fight back when we are faced with the most horrific of challenges shows us just what we are made of. In Pretoria, they REBUILT that Olympic size rink and got back out there and skated on it until the rink was relocated to The Grove Mall in 2013. No matter how bad things get in life, there's one thing you can count on: you just can't keep a skater from the ice.

Skate Guard is a blog dedicated to preserving the rich, colourful and fascinating history of figure skating and archives hundreds of compelling features and interviews in a searchable format for readers worldwide. Though there never has been nor will there be a charge for access to these resources, you taking the time to 'like' on the blog's Facebook page at http://www.facebook.com/SkateGuard would be so very much appreciated. Already 'liking'? Consider sharing this feature for others via social media. It would make all the difference in the blog reaching a wider audience. Have a question or comment regarding anything you have read here or have a suggestion for a topic related to figure skating history you would like to see covered? I'd love to hear from you! Learn the many ways you can reach out at http://skateguard1.blogspot.ca/p/contact.html.
Posted by Skate Guard Blog at November 05, 2015
Email ThisBlogThis!Share to TwitterShare to FacebookShare to Pinterest
Newer Post Older Post Home