From Patrick Chan, Meagan Duhamel and Eric Radford, Kaitlyn Weaver and Andrew Poje and Kaetlyn Osmond to the stars of tomorrow, the 2016 Canadian Tire National Skating Championships will bring the best skaters in Canada front and center right here in Halifax, Nova Scotia starting tomorrow. Due largely to geography - the East Coast always seems to get the short end of the stick - the city's rich skating tradition is often overlooked. Although we've explored Halifax skating history before on the blog, it's high time that we took a more in depth look: 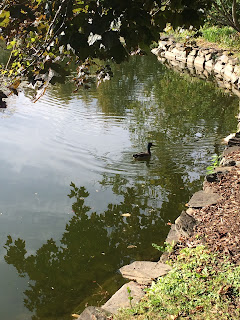 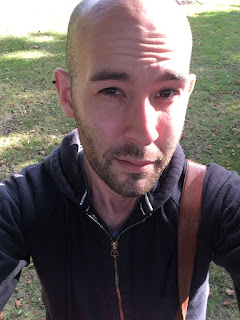 Griffin's Pond, which we today know as the beloved duck pond in the Halifax Public Gardens, played a tremendously important role in Canadian skating history. A brook (now underground) in the Halifax Commons actually fed Griffin's Pond and a host of other skating ponds in Halifax in the nineteenth century. 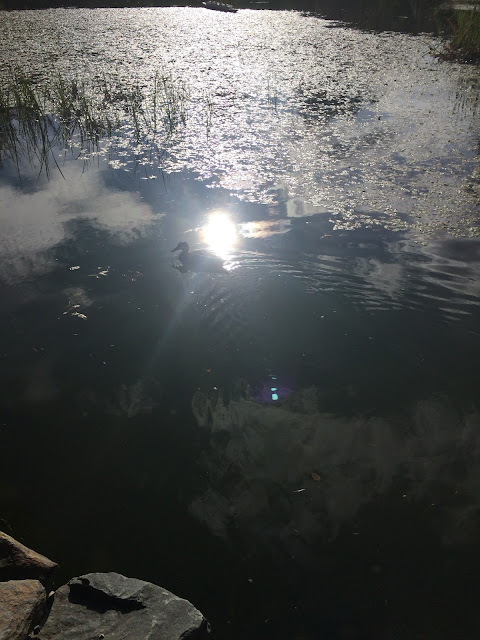 In his "Walking" columns from the January 2 and 8, 1988 editions of the Mail-Star, late Halifax historian, lecturer and author Lou Collins explained, "Beginning at the height of land near the intersection of Cunard and Windsor streets, the Fresh Water Brook ran through a swampy area south of the intersection of Cunard and Robie streets. It provided water for the Egg Pond in the Central Common, a pond now, unfortunately, left dry. It then found its way to Griffin's Pond in a rough area of the Common was to be transformed into the north section of the Halifax Public Gardens." In those days, the Public Gardens were owned by the Halifax Horticultural Society and ice skating became tremendously popular among its members in the winter.

In 1861, a barn was constructed on the east side of the Gardens near the original entrance on South Park Street and a short distance from Griffin's Pond with the intention of being used as a 'skating house' but it was too late in the season and the ice was too thin for the facility to be made use of that year. The following year, the Halifax Skating Club was formed by 'fancy skating' enthusiasts. The November 1, 1862 issue of "The Acadian Recorder" explained that "prisoners at Rockhead cleared snow from Griffin's Pond and made good skating." Although skating was first enjoyed on the pond itself, it was (perhaps for safety reasons) the area next to it where history would be made. 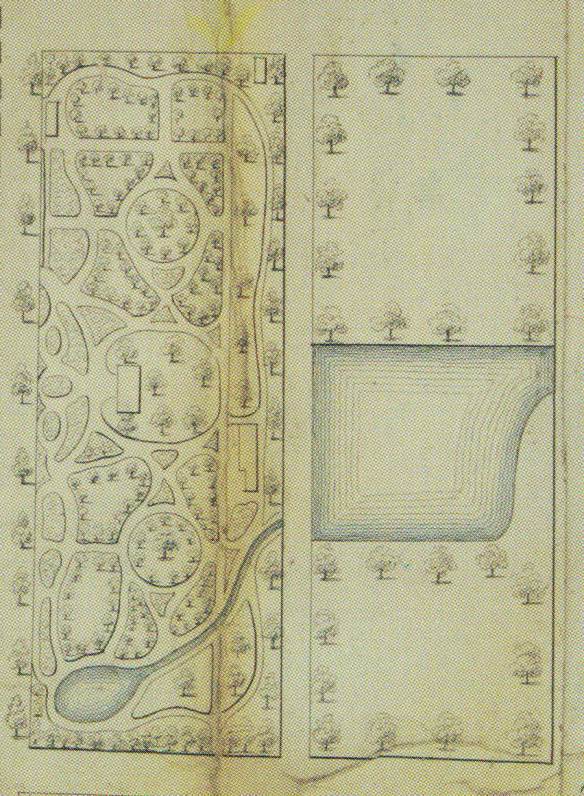 This 1851 map from The Halifax Horticultural Society, reproduced from the Along The Garden's Path blog, shows the area where the covered skating rink was later constructed in the lower right corner, framed by trees.

By 1863, a covered skating barn was constructed in the area adjacent to the pond (one of the first covered rinks in Canada) and the members of the Halifax Skating Club had a home... The Halifax Skating Rink. I want to offer my thanks to Phillip at the Nova Scotia Archives for helping me track down this wonderful primary source on microfiche describing the official opening of the rink on January 3, 1863. Reproduced in its entirety with permission, here's the article "The Skating Rink" from the Monday, January 12, 1863 issue of "The Nova Scotian":

"This 'institution' is located on the Horticultural Society's grounds on Spring Garden road. The building enclosing the Rink is 60 feet wide and 180 feet in length, and this area of ice constitutes the extent of the skating facilities. The structure is permanent in its character and is tastefully fitted up, and gas is introduced so that the Rink can be lighted at night. At the entrance end of the building, and joining upon it is a commodious room separated from the Rink, furnished with a stove, which is a desirable arrangement in connection with the enterprise. The building is constructed in such a manner as to give an apparent lightness of effect combined with strength. In the centre of the far end is a recess with an elevated dais for the Band. By day the Rink is lighted by a row of large windows on the two sides, and by night by four pendants each containing several burners. On Saturday, 3d inst., the Rink was formally opened by the Lieutenant Governor. A large number of the elite of the city congregated to witness the ceremony. The Band of the 17th took their station upon the dais and played some lively tunes in that style for which they are so justly celebrated in this city. At the appointed hour His Excellency arrived, and after making a few well chosen and appropriate remarks, declared the Rink open. He remarked that the exercise of skating would prove condusive to the health of those engaged in it, besides affording very agreeable amusement and pastime. He expressed his extreme satisfaction with the arrangements that had been made, and complimented the [promoters] of the enterprise upon the success that had crowned their efforts. So soon as the Rink was declared open, some fifty or sixty ladies and gentlemen, being provided with skates, glided out upon the ice and enjoyed the pleasure of the 'giddy whirl' to their hearts content. The weather being extremely mild, the ice was rather too soft for the sport, but nevertheless all seemed delighted with its condition. Owing to the situation of the Rink and its exclusion from the sun's rays, the ice was in much better condition that might have been expected. Judging from observation no expense seems to have been spared in rendering the rink and its associations in every way comfortable for ladies and gentlemen, at a very moderate subscription price. We wish those interested in the enterprise that success which their efforts so well merit."

As David Irish's CBC article from earlier this month noted, membership at the Halifax Skating Club in its early days was much like skating clubs everywhere in those times - a trifle choosy. Membership wasn't open to the general public. You pretty much had to be a member of the Horticultural Society, have money, know someone or all of the above. In fact, "such was the popularity of the sport at this time that within three weeks the directors were forced to close the membership," explained Shirley Ellis on October 4, 1964 in the "Mail-Star".

The skating season, owing to the use of natural ice, was generally from January to March with the pond opening early in years where the winter kicked in early. The late George Mullane, in his "Mail-Star" column "Many Old Ponds No Longer Remain" noted that one autumn "the frost must have come early because scores of ladies and gentlemen [skated], the ice being in capital condition, and the scene presented was a gay one." Who doesn't love a good gay scene? That's what I want to know!

Skaters were also often treated to tea and light refreshments ("The Acadian Recorder" noted ice cream and strawberries were served) and live music from the Union Harmonic Orchestra. In the summers, the rink was floored and used for roller skating. We won't judge them for that. Okay, we will a little, but that's okay.

In her delightful 1992 book "Figure Skating History: The Evolution Of Dance On Ice", Lynn Copley-Graves notes that "the first authentic waltz on ice is believed to have originated... in Halifax, Nova Scotia, developed by a British officer stationed there who had experimented with the waltz at Davos or St. Moritz. Somehow he discovered the figure three with a stretched free leg before turning the three as the key to waltzing on ice. Replacement of this once-back style of valsing with the Valse using three turns took time and spread gradually from country to country, from continent to continent." This unnamed British officer's introduction of valsing to Haligonians was an important milestone in terms of turning the upper crust on to the joys of ice dancing.

The fate of the 'Griffin's Pond rink' remains somewhat shrouded in mystery but it's possible we can put two and two together. "The Acadian Recorder "tells us that the rink was illuminated with coal gas and near the main entrance, a reception room was equipped with a coal stove. A December 28, 1976 article from The "Mail-Star" notes that (lord Jesus!) there was a fire in that covered rink, perhaps as a result of someone going out to get a cold pop? As a result of that (and perhaps a little competition, which we'll get into in the next blog) the rink was eventually demolished in 1889, although skating on the pond was revived briefly when the city opened the rink during a particularly frosty winter in the seventies "much to the surprise of resident ducks and visiting seagulls", according to Collins.

Skate Guard is a blog dedicated to preserving the rich, colourful and fascinating history of figure skating and archives hundreds of compelling features and interviews in a searchable format for readers worldwide. Though there never has been nor will there be a charge for access to these resources, you taking the time to 'like' on the blog's Facebook page at http://www.facebook.com/SkateGuard would be so very much appreciated. Already 'liking'? Consider sharing this feature for others via social media. It would make all the difference in the blog reaching a wider audience. Have a question or comment regarding anything you have read here or have a suggestion for a topic related to figure skating history you would like to see covered? I'd love to hear from you! Learn the many ways you can reach out at http://skateguard1.blogspot.ca/p/contact.html.
Posted by Skate Guard Blog at January 17, 2016
Email ThisBlogThis!Share to TwitterShare to FacebookShare to Pinterest
Newer Post Older Post Home
"As a rule an author has one or two popular ways of contrasting the past with the present. He can treat the past as lying in comparative doleful ignorance, or he can explain that the past was infinitely superior to the day we live in. Of course, either method is the popular journalism of the moment, and in reality there is no sharp contrast, but a gradual transition which leads the past into the present." - Joel B. Liberman, Skating Club Of New York