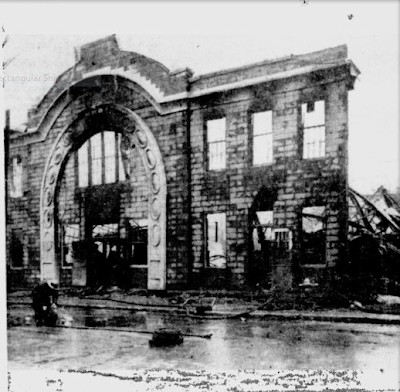 With the 2016 Canadian Tire National Skating Championships just weeks away right here in Halifax, Nova Scotia, I couldn't think of a better month to devote the blog entirely to exploring tales from Canadian skating history! This month on Skate Guard, we'll have the final episode of the Axels In The Attic podcast series with Allison Manley, an incredible exploration of Halifax's skating history and biographical sketches of Carole Jane Pachl, Shaun McGill, Otto Gold, Guy Owen and more... but first, we'll kick off 2016 with the harrowing tale of the 1949 Minto Skating Club fire.

Founded in 1904 by then Governor-General Of Canada, the Earl and Countess Of Minto, the Minto Skating Club has played an integral part in Canadian skating history from its inception and is still thriving today at its current location on Lancaster Road in Ottawa. The first home of the club was actually the Minto's own residence at the time, Rideau Hall, which has been the official residence and workplace of every Governor-General in Canada since 1867. As much of the membership was drawn from the Rideau Skating Club (which was already in operation before the Minto Club) the Rideau Skating Rink on the corner of Theodore (now Laurier) and Waller Streets became a natural choice for a more permanent residence for the club. The Minto Skating Club (at the Rideau Skating Club) played host to Canada's first official Canadian Figure Skating Championships in 1905 but in 1907, a fire occurred at the rink of the severity requiring the cancellation of the 1907 Canadian Figure Skating Championships.

The Minto Skating Club resumed operations both at the Rideau Rink and Dey's Arena until a new permanent home for the club was found in 1922 on nearby Waller Street at a rebuilt Rideau Skating Rink. The Minto Club took over the rink and it was renamed the Minto Rink. Elite level skating thrived under the direction of coaches from abroad and in the thirties the club dominated Canadian figure skating with an iron fist. In 1948, the club produced its first World (and only Olympic) Champion, Barbara Ann Scott. A year later, the flames that had haunted the club since the 1907 fire returned in the form of an inferno of epic magnitude.

On November 1, 1949,  the Minto Skating Club was simply put... destroyed. In the early morning hours, early morning motorists saw the reflection of the fire and believed the entire downtown was ablaze. Shortly before 5 AM, an alarm was sounded to which five fire stations responded. A November 2, 1949 article from the Ottawa Citizen explained that "firemen were severely handicapped by the heavy draft created in the vaulted interior of the rink proper which sucked the flames along at lightning speed. They were able to do little more than surround the building and concentrate their efforts on preventing the blaze from spreading to adjacent houses on Waller Street, Laurier and Hasty Avenues."

As Colonel E.J. Underwood, the club's President and C.H. Cummings, the club's Secretary-Treasurer arrived on the scene, the rink's attendant and his family were outside recovering from their daring escape from the inferno. After finishing making ice only two hours earlier, at 4:30, William Ayre and his wife along with their four children (sixteen year old Jacqueline, eleven year old Wayne, eight year old Gail and three year old Garry) had been sound asleep when Mrs. Ayre woke her husband at the smell of smoke. All six escaped from the burning building with their lives in just the knick of time, Mr. Ayre telling the press "If we hadn't awakened right then we would never have gotten out alive. We were very lucky because another minute or so would probably have meant [the end] for the six of us." A forty nine year old woman named Blanche Laviolette, a resident at a rooming house next to the rink, was recovering from a serious operation at the time of the disaster and collapsed on the pavement and suffered a heart attack as the result of the excitement of the catastrophe. Treated at one of the fire stations responding to the disaster, she was reported to be "resting comfortably" later that morning.

A local detective named Raoul Desjardins told The Ottawa Citizen that "the fire seemed to center around the corner where they say the furnace room was. When I first got there, there was only dense clouds of smoke filtering out of the building. Then as the firemen broke in with their hose lines the flames mushroomed out and went up the walls to the roof. The whole thing was ablaze from end to end within a matter of minutes. It was impossible to get near the building because of the heat much less attempt to salvage anything inside. It was only good fortune that the caretaker and his family got out for the whole place was a raging inferno within ten minutes."

The fire raged until mid-morning, the heat so severe that an aluminum fire ladder melted "until it ran like butter". When the ashes settled, only the front and rear walls of the rink remained standing and not only was the home of the Minto Skating Club gone but with it precious memories, equipment and memorabilia. According to the Ottawa Citizen article, "Club President Colonel Underwood stated that new ice-making equipment had recently been installed at a cost of $35,000, and that a new tea room for junior skaters and a sitting-out room had been added to the club's quarters in the past several years. There were about 30 trophies in the building, symbolic of achievement by Ottawa skaters over the years since the club was founded in 1903 by the Earl and Countess of Minto. There were also many valuable pictures and a framed letter from Lady Minto. All fell prey to the flames... Members of the club suffered serious loss due to the destruction of skating costumes, boots, skates and other equipment stored in lockers of the building. Several new blocks of steel lockers were recently installed in the club and these blackened and seared by the flames still stood in one end of the building amid a clutter of debris this morning. Firemen, however, were of the opinion that the intense heat had probably ruined their contents."

Skaters weren't the only once displaced by the fire. Just days before, Olympic Silver Medallist and World Champion Andrea Kékesy had come from Hungary to Ottawa only to find herself with nowhere to coach. Nino Minelli, a Swiss skating instructor who had only that year emigrated to Canada to teach at the club lost all of his skating equipment and clothing in the fire. Another serious loss were the official records of the Canadian Figure Skating Association, which at the time were stored in the building. It didn't help the club had just collected its annual membership fees within the previous week. That cash was gone too. The membership of five hundred skaters were all estimated to have lost approximately one hundred dollars each in skates, equipment and clothing in the flames, raising the total loss in the fire to approximately three hundred thousand dollars, no paltry sum even then. If you take inflation into account you're talking over three million today. How do you rebuild from something like that?

Incredibly, the Minto Skating Club bounced back. Returning to the club's roots, members took buses to the Buckingham and at the invitation of the Governor-General, skated on the open air rink at Government House. New music was recorded by Harris Johnson to replace the club's music library that had been destroyed. In no time, a new rink was built on Henderson Avenue, which played host to the Minto Skating Club until 1986-1987 when the club transitioned to its current home. It has played host to a membership that reads like a who's who of Canadian figure skating including World Champion Donald Jackson, Canadian Champion Lynn Nightingale and Olympic Silver Medallists Isabelle and Paul Duchesnay over the years.

Rose Kennedy once said, "Birds sing after a storm; why shouldn't people feel as free to delight in whatever remains to them?" One has to look back at the indomitable spirit of the skaters of the Minto Skating Club, who somehow found skates, costumes, coaches and ice and pressed on after losing everything, and remember that life goes on, that giving up is never an option. We're here on this earth to sing after every storm.

Skate Guard is a blog dedicated to preserving the rich, colourful and fascinating history of figure skating and archives hundreds of compelling features and interviews in a searchable format for readers worldwide. Though there never has been nor will there be a charge for access to these resources, you taking the time to 'like' on the blog's Facebook page at http://www.facebook.com/SkateGuard would be so very much appreciated. Already 'liking'? Consider sharing this feature for others via social media. It would make all the difference in the blog reaching a wider audience. Have a question or comment regarding anything you have read here or have a suggestion for a topic related to figure skating history you would like to see covered? I'd love to hear from you! Learn the many ways you can reach out at http://skateguard1.blogspot.ca/p/contact.html.
Posted by Skate Guard Blog at January 02, 2016
Email ThisBlogThis!Share to TwitterShare to FacebookShare to Pinterest
Newer Post Older Post Home