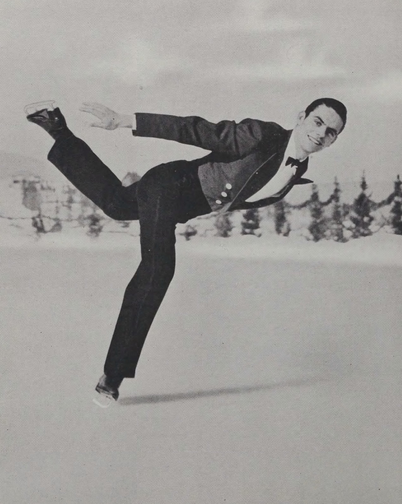 As bombs dropped overseas in Europe and war efforts ramped up, American skaters couldn't be dragged away from the ice. Some trained in sunny California rinks; others in chilly New York ones. Still others took to the ice in a 80 X 80 cold storage warehouse in Detroit converted into two separate ice rinks.


The show, as it always does in skating, went on when The Skating Club Of Boston played host to nearly one hundred of America's best at the U.S. Figure Skating Championships held from January 31 to February 2, 1941. 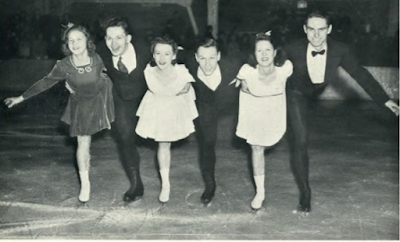 In a three-two split of the judging panel, Walter Sahlin defeated Jack Might to win the novice men's title. Doris Schubach and Walter Noffke, representing the Springfield Ice Birds, were winners in junior pairs. William Grimditch Jr. won the Irving Brokaw Trophy and junior men's title, while Donna Atwood was victorious ahead of thirteen others in the junior women's event. 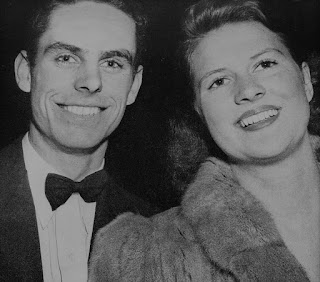 Many of the skaters who competed in Boston that year later moved on to successful careers in the professional ranks. Twelve year old novice women's champion Dorothy Goos of the Skating Club of New York was certainly one; she was headlining with Holiday On Ice by the time she was seventeen! Fresh off a win at the Pacific Coast Championships, a twenty one year old certified judge and self-taught sensation named Eugene Turner defended his U.S. senior men's title. The handsome young skater was the toast of Massachusetts that year. The Sunday Morning Star on February 2, 1941 noted that "Eugene Turner of Los Angeles, a scarlet-coated master of the spins, scored a perfect six tonight to successfully defend his men's senior title... The 20-year old Californian concluded a five-minute exhibition with a series of toe and change-foot spins and intricate foot weaving, that won him the unanimous decision of the judges... Turner, wearing a brilliant red jacket, executed a series of back bend spread eagles that brought continuous applause from the gallery." That splash of colour in a sea of grey certainly brightens your spirits to read, doesn't it? Arthur R. Vaughn Jr., a sixteen year old from Philadelphia who wore his glasses while he competed, bettered his fourth place finish from the year previous in Cleveland, Ohio to finish second ahead of Brooklyn, New York's William K. Nagle. Like Goos, Turner moved on to show biz as well. In 1942, he skated with Sonja Henie in "Iceland" and 1943, he partnered Belita in "Silver Skates". 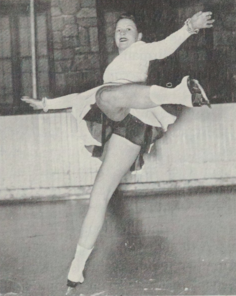 With Joan Tozzer marrying and retiring from competitive skating, the senior women's field was wide open. University Of Pennsylvania student Jane Vaughn of Philadelphia rose to the occasion, defeating Gretchen Merrill of Boston (that year's Eastern Champion) in a three-two split of the judging panel. Charlotte Walther of New York, took the bronze, ahead of Dorothy Glazier of Boston and the Pacific Coast Champion, Ramona Allen of Oakland, California. If the name Jane Vaughn rings a bell, it's because she went on to become The Most Hated Skating Judge In Vienna in 1967. 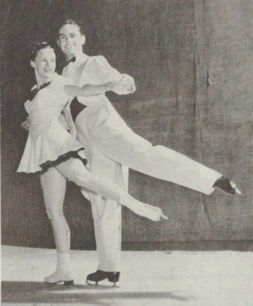 After losing to Patty Vaeth and Jack Might in their hometown of Colorado Springs at the Pacific Coast Championships, Donna Atwood and Eugene Turner reversed that result in Boston in the pairs event. Winning the bronze ahead of Mr. and Mrs. William Bruns were Joan Mitchell and Bobby Specht. After the event, Atwood and Specht teamed up and won the following year's national pairs title together before joining the professional ranks and becoming two of the most popular Ice Capades stars of all time.

Sandy MacDonald and Harold Hartshorne won the ice dance event for the third time at the 1941 U.S. Championships in a deep field comprised of fourteen teams. Although many male U.S. skaters were starting to enlist, I'd say fourteen senior ice dance teams during World War II was pretty good, wouldn't you? Lynn Copley-Graves, in her wonderful book "Figure Skating History: The Evolution Of Dance On The Ice" noted that "things were happening so fast [in the development of ice dance in America] that no one had yet passed the Gold Dance Test, so it could not be a prerequisite in the Dance event" in those days. Eugene Turner, who had medalled in both the men's and pairs competitions, incredibly claimed the silver in ice dance as well with partner Elizabeth Kennedy. In third were Edith Whetstone and Alfred Richards, Jr. Due to a lack of entries, the fours competition was cancelled and judges announced that the previous year's winners, Jannette Ahrens, Mary Louise Premer, Robert Uppgren and Lynn W. Wakefield Jr., would continue to hold the title for another year.

Skate Guard is a blog dedicated to preserving the rich, colourful and fascinating history of figure skating and archives hundreds of compelling features and interviews in a searchable format for readers worldwide. Though there never has been nor will there be a charge for access to these resources, you taking the time to 'like' on the blog's Facebook page at http://www.facebook.com/SkateGuard would be so very much appreciated. Already 'liking'? Consider sharing this feature for others via social media. It would make all the difference in the blog reaching a wider audience. Have a question or comment regarding anything you have read here or have a suggestion for a topic related to figure skating history you would like to see covered? I'd love to hear from you! Learn the many ways you can reach out at http://skateguard1.blogspot.ca/p/contact.html.
Posted by Skate Guard Blog at March 24, 2016
Email ThisBlogThis!Share to TwitterShare to FacebookShare to Pinterest
Newer Post Older Post Home
"As a rule an author has one or two popular ways of contrasting the past with the present. He can treat the past as lying in comparative doleful ignorance, or he can explain that the past was infinitely superior to the day we live in. Of course, either method is the popular journalism of the moment, and in reality there is no sharp contrast, but a gradual transition which leads the past into the present." - Joel B. Liberman, Skating Club Of New York