The Boy From Bratislava: The Ondrej Nepela Story 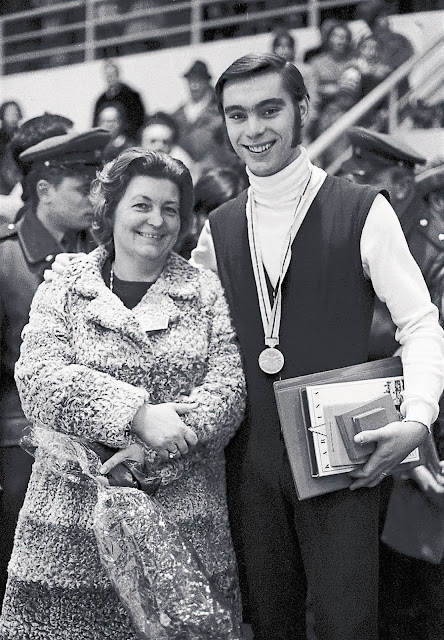 "Many people perceived him as handsome or even as beautiful. He evidenced an androgynous, Nijinsky-like quality. In physical features he reminded me of a Tartar from the Eastern European steppes, with slanted Mongolian eyes yet light skin. He was small. He was fine. He was a steady, nerveless competitor, completely lacking in personality or finesse: a generic Soviet-satellite skater who had been browbeaten into becoming a fine technician - less fine in free skating and more precise or womanlike in the school figures." - Toller Cranston, "When Hell Freezes Over, Should I Bring My Skates?" 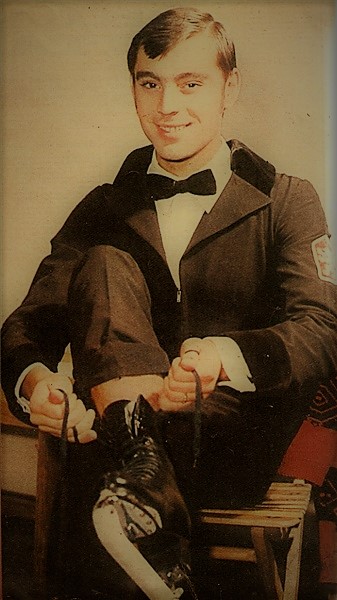 Born January 22, 1951, Ondrej Nepela was the child of Central Slovakian parents. His father worked as a driver at the ministry and his mother was a seamstress and homemaker. He was drawn to the ice rink in Bratislava at the age of seven after watching figure skating on television and like so many great skaters, imitating what they saw by dancing around the living room in imitation. Hilda Múdra, Nepela's coach for the entirety of his amateur career, spoke about how she first started working with the young skater in one of dozens of Slovakian news articles I used in researching today's blog: "I did not train young children. Mrs. Nepelová arrived. Supposedly her son had skated two weeks and [all the coaches] ignored him. I told her, dear lady, show me the boy. She did so. I took [him]. I [took] the best in the world." The shy young skater forged an immediate bond with his coach. Múdra explained, "I often told him to go into the rink to train a paragraph and I left. I returned [after an] hour and he still practiced and practiced. He was a great boy on whom I could rely absolutely." 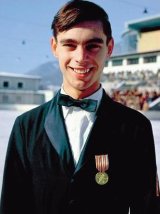 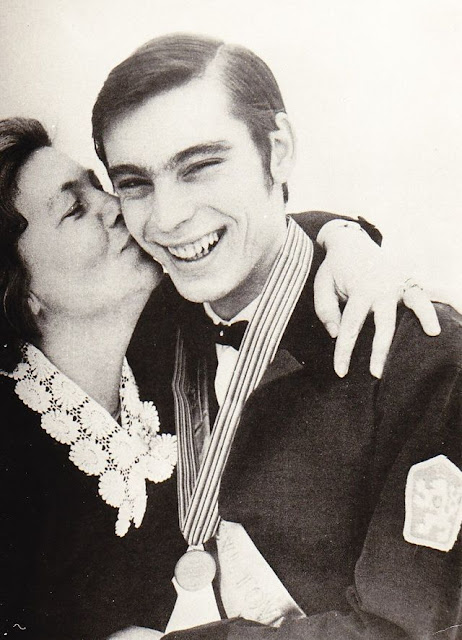 Training early in the mornings, going to school and returning to the rink in the afternoons, much of Nepela's training was done on a sectioned off third of Bratislava's ice rink. Although off ice training in dance wasn't something that was incorporated into the Czechoslovakian skater's training regime, he did practice jumps and spins off the ice regularly and soon became well known as a specialist in school figures. When Austrian skaters Wolfgang Schwarz and Emmerich Danzer retired from competition following the 1968 season, Nepela rose to the occasion and established himself as the skater to beat. In 1969 in Garmisch-Partenkirchen, he won his first of five consecutive European Championships. After claiming silver at the World Championships in both 1969 and 1970, he finally became World Champion in 1971. That same year he was honored as Czechoslavia's top athlete and was afforded a prefab housing estate in the Dubravka borough in northwestern Bratislava. Nepela lived in the same building as his coach and second mother 'Aunt Hilda'.


At the 1972 Winter Olympics in Sapporo, Japan, Nepela found himself in a very similar situation to Austria's Trixi Schuba. He amassed an incredible fifty five point lead over his closest competitor, France's Patrick Péra in the school figures and despite falling on a triple loop attempt and finishing fourth in the free skate, still won the competition by over sixty points and ten places. Perhaps most amusing was the fact that in Communist Czechoslovakia, when the live television transmission of the men's free skate in Japan failed, radio host Gabo Zelenay conveniently failed to mention Nepela's fall to listeners, despite describing the rest of his performance in detail. Mudra recalled that "after the [competition] I did not feel any particular joy, though I imagined what it would be when I saw the flag rise to the mast. Maybe I'm immodest; I knew Nepela obtained gold. He also was one of spectacular emotions. We had a habit. The morning before the competition we [would go] for long, private walks... [When we returned] we discovered the rink was empty. We wandered through the darkness until we suddenly saw a red light that showed us the way out. That was the only dramatic moment." After winning a second World title in Calgary, Nepela toured fifteen cities with Tom Collins' Tour Of Champions alongside Janet Lynn, Toller Cranston, Karen Magnussen, Trixi Schuba, Jojo Starbuck and Ken Shelley and others.

After winning a final European title in Cologne in 1973, Nepela finished his competitive career with a win in front of a hometown audience at that year's World Championships in Bratislava. It was the only time he performed a short program at a World Championships during his career and he skated exceptionally well, winning the figures and finishing second in both the short and long programs. It was also at this event that Toller Cranston reported to have a fling with Nepela, described in his book "When Hell Freezes Over, Should I Bring My Skates?" Nepela told his coach 'Aunt Hilda' his thoughts on his final competition: "It was the hardest night of my life - I had a responsibility to stand up at home, where I was skating for sixteen years. Saying goodbye felt like a divorce."


Moving on to a professional career, Nepela toured with Holiday On Ice in Europe from 1973 to 1986.
'Aunt Hilda' said that "he often called me, telling me about choreography and steps and I also describing in detail sequin studded costumes that had... He was interested not only of the figure skating, even though he was in the ice show, and talked to me constantly about whom he met... He did not like athletics and later began to work on horseback riding." 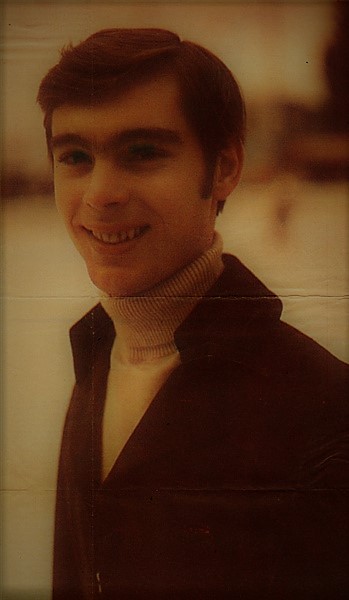 Life changed in 1986 when Nepela got an apartment in Mannheim, West Germany, became certified as a skating coach and started working with promising West German skater Claudia Leistner. Through Nepela's coaching, Leistner reclaimed past glory and returned to the European and World podiums. Things seem to be looking up just when they came crashing down. 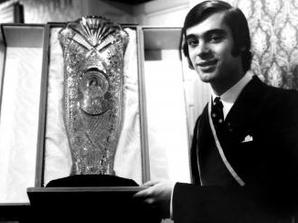 Tragically, Nepela passed away on February 2, 1989 at the age of thirty eight in a hospital in Mannheim, West Germany. The West German Skating Union, who made the announcement he'd passed away stated only that he'd died "after a long illness" although accounts suggest that his death was HIV related. We know that his mother cared for him a week before his death and 'Aunt Hilda' arrived five days beforehand. We also know that he was so sick he couldn't even open a bottle of medication. After two surgeries (I'll spare you the details but the latter wouldn't have been pretty) he died as a result of cancer of the lymph nodes and colorectal cancer. A January 2009 article from Instinkt magazine noted that after his death, his mother and 'Aunt Hilda' visited the bank and found that although a "wealthy admirer from Bolzano had regularly sent gold jewelry, every world champion received skates with insets of diamonds and he should thus have [had] three, and as a soloist in Holiday on Ice he earned a lot of money, the safe and accounts had nothing left. It was said that he had been ripped off [by] friends." Nepela was interred in the Slávičie Údolie Cemetery in the Karlova Ves borough of Bratislava. 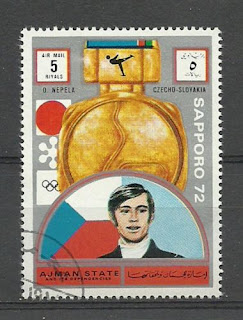 Posthumously, he was honoured with the creation of the Ondrej Nepela Memorial international competition in 1993, a postage stamp in 1995 and in December 2000 he was named the Slovak Athlete Of The Twentieth Century. The following year, he had a rink in Bratislava named after him. However, the only skater from Czechoslovakia ever to win an Olympic gold medal has never been named to the World Figure Skating Hall Of Fame. Petr Barna, in his July 2014 Skate Guard interview, said that "he was always a very down to earth kind of person. He always treated me and other people very nicely and that is what I took from knowing him personally." Cyclist Anton Tkáč, who grew up with Nepela, said "Ondrej was quiet, as if a fearful boy. But when he started talking about sports plans, he embodied a sense of purpose." However overlooked for his role in figure skating history he was because his speciality was school figures and not free skating, Ondrej Nepela deserves to be remembered.

Skate Guard is a blog dedicated to preserving the rich, colourful and fascinating history of figure skating and archives hundreds of compelling features and interviews in a searchable format for readers worldwide. Though there never has been nor will there be a charge for access to these resources, you taking the time to 'like' on the blog's Facebook page at http://www.facebook.com/SkateGuard would be so very much appreciated. Already 'liking'? Consider sharing this feature for others via social media. It would make all the difference in the blog reaching a wider audience. Have a question or comment regarding anything you have read here or have a suggestion for a topic related to figure skating history you would like to see covered? I'd love to hear from you! Learn the many ways you can reach out at http://skateguard1.blogspot.ca/p/contact.html.
Posted by Skate Guard Blog at May 27, 2016
Email ThisBlogThis!Share to TwitterShare to FacebookShare to Pinterest
Newer Post Older Post Home