The Defection Of The Jelinek's 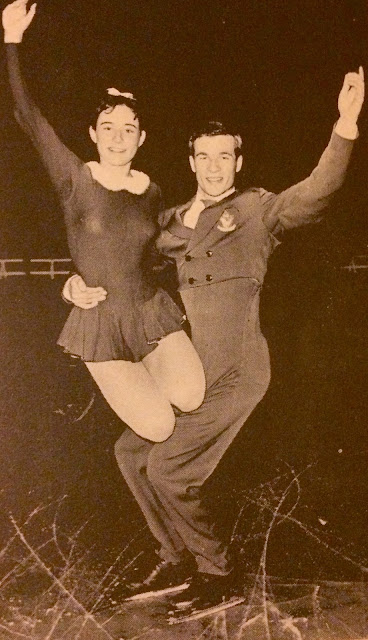 Canadian, North American and World Champions Maria and Otto Jelinek gained the admiration and adulation of figure skating fans in both Canada and Czechoslovakia when they won the 1962 World title in Prague but the incredible story of the path that lead them back the city they were born was nothing but harrowing.

Henry and Jara Jelinek's comfortable existence was shattered on March 15, 1939 when the Nazis took over Czechoslovakia. With the German's cork factories blown up in air raids, it was only natural that they found a reason to take over the Prague cork factory ran by Henry Jelinek; a business that had been in his family for three generations. A World War I veteran, he was accused of conspiring against the Nazis and holding political meetings in his home. Arrested thirty minutes after the birth of his son Henry Jelinek Jr., Henry Jelinek was placed in solitary confinement in a room six feet long and one foot wide and lived on a diet of bread and water twice a day while tortured, degraded and subjected to daily interrogation until he was finally released by the Gestapo just in time to witness Lidice, a village twenty miles from Prague, entirely wiped out after resistors from the area were believed to have played a role in the assassination of SS Obergruppenführer Reinhard Heydrich, the 'Reich Protector of Bohemia and Moravia.'

Germans ransacked and encamped in the family home. Henry Jelinek and his five year old son participated in The Battle Of Prague which dispelled most of the German army. As things slowly began to turn to some sense of normalcy when World War II finally came to an end, Henry's children Otto and Maria gave their first skating exhibition at the Winter Stadium in Prague. However, when Henry and Jara were in St. Moritz, Switzerland the following year watching Dick Button and Barbara Ann Scott win Olympic gold medals, the Communist Russians who had moved in after the Germans departed took over Czechoslovakia, seizing steel, glass, coal, ammunition... and Henry Jelinek's cork factory yet again. When the Communists announced the mysterious "suicide" of Czech diplomat and politician Jan Masaryk (later ruled a murder), Henry Jelinek decided it was time to get out of Czechoslovakia. Enlisting the aid of a mysterious South American man known only as 'Mr. G.', he paid handsomely to get his wife Jara and their family across the Czech border into Switzerland, where he waited anxiously with their eldest son Frank, who was attending a private school in Lausanne.

At 4:45 AM on May 15, 1948, Jara Jelinek piled her children Otto, Maria, Frank and Henry Jr. into a taxi and met 'Mr. G' in a waiting Sedan. The family hurriedly piled in and began their harrowing journey, initially afraid they were being followed. A Communist policeman stopped them and demanded a lift to the border. Otto nearly gave away their ruse that they were just a South American family going away for the weekend, as the passports they were using actually belonged to their driver's family. Henry Jelinek Jr.'s 1965 book "On Thin Ice" describes what happened when they arrived at the customs house on the border: "The policeman jumped out of the car and waved to the two border guards standing beside the heavy steel barrier which blocked our road to freedom. He hurried to the gate and changed places with one of the guards, leaving us all in the car. The man off-duty drove away on a motor scooter, while the large dogs tied to the cable next to the road started to bark viciously. 'I'm scared, Mommy,' cried Maria...'"

As 'Mr. G' was interrogated by five or six uniformed Communist border officers, he was asked how many people were in their family. He replied five. However, including 'Mr. G' there were only five passports... and six people. Henry wrote of the car inspection and head count that followed: "The guard jabbed under the seats, using his bayonet as a probe. Angry at finding nothing, he ordered us in again and stomped back to the shack. 'Well, how many are there?' the heavy-set man asked. 'Five,' Joseph replied. Counting those of us in the car, Joseph had forgotten to add the consul to the number. So five it was, as stated in the passport. Joseph probably saved our lives by his one figure oversight." After sending Frank back to school, Henry Jelinek paced the streets of Lausanne, with no news as to whether or not his family safely made it through the border... or if they were even alive. Just when he was preparing to head back to Prague and face the worst, his tearful wife and children arrived at his hotel. Jara said, "How lucky we are. That one guard could not count and another was half deaf. Oh! And poor little Maria. After I told her we had escaped, she said 'But Mommy, we must return. I forgot my dolls.'"

After performing Swiss Family Robinson style together in a family skating act in Lausanne, the Jelinek's left promptly for Canada and never looked back... or at least for a decade. Coached by Bruce Hyland, the sibling duo became World Medallists in 1957, a feat they repeated in 1958 and 1960. They finished just off the podium in fourth at the 1960 Winter Olympics and in 1961, won their first Canadian and North American titles, the latter despite suffering a terrifying fall on a lift in practice that threatened to end their entire career.

However, the real story in 1961 was their planned return to Prague to represent Canada at the World Figure Skating Championships. In the January 27, 1961 edition of the Montreal Gazette, the controversy surrounding the Jelinek's was discussed thusly: "Dr. James Koch, president of the International Skating Union had said the championships would be taken away from the Czech capital if the brother-and-sister pair from Bronte, Ont., were not recognized as Canadians. He said the ISU board resolved unanimously that the championships would be held elsewhere if the Jelinek's were prevented from going to Prague... The board appeared to be still worried about the situation despite a report from Montreal that the two had been released from Czech citizenship. But later a spokesman at the Czech mission said the problem had been settled... 'They will travel to Prague as Canadians with the privileges of Canadians,'" Their participation put the entire Canadian Figure Skating Association and its skaters on edge as they flew to Prague to compete that year. When they arrived, the Sabena Crash that killed the entire U.S. figure skating team - a team of friends they'd competed against only days earlier - was the real story.

However, a strange side story involving the Jelinek's was brewing in the wake of the tragedy. Henry and Jara, terrified their children had switched planes to fly with their American friends, tried to contact their children in Prague. According to Henry, the operator told him, "Sorry, it is impossible to speak with Miss Jelinek or Mr. Jelinek. Miss Maria Jelinek is out of town. Mr. Otto Jelinek is seriously ill and no communication is allowed to him." Henry implored, "Why were we given false news about Otto and Maria? And what was the intention behind that Communist lie?" The timing, to some, seemed a little too coincidental. Recalling the tragedy in a December 31, 2000 interview with the Boston Globe, Otto recalled "it's something that's always in our hearts. You can't put it away in a corner of your mind and forget. You feel closer to the tragedy because you realize you missed it by the skin of your teeth.''


At any rate, as we know the competition was ultimately cancelled, the Jelinek's made it home safely and returned to win their first and only World title the following year - IN Prague - before touring with Ice Capades and retiring from professional skating in 1969. Otto became a Tory MP and Canada's first Minister of Fitness and Amateur Sport to have competed in the Olympics and Maria a mother of two boys who has remained active in the Canadian figure skating community. I don't know about you... but revisiting their story just blew my mind. I could honestly go on and on about these two (and probably will at some point) but seriously... you NEED to read Henry Jelinek Jr.'s book if you haven't already. It's out of print obviously but if you go hunting in used book stores (my favourite!) and on used book sites, you just might score yourself a copy. It is worth the hunt - I promise!

Skate Guard is a blog dedicated to preserving the rich, colourful and fascinating history of figure skating and archives hundreds of compelling features and interviews in a searchable format for readers worldwide. Though there never has been nor will there be a charge for access to these resources, you taking the time to 'like' on the blog's Facebook page at http://www.facebook.com/SkateGuard would be so very much appreciated. Already 'liking'? Consider sharing this feature for others via social media. It would make all the difference in the blog reaching a wider audience. Have a question or comment regarding anything you have read here or have a suggestion for a topic related to figure skating history you would like to see covered? I'd love to hear from you! Learn the many ways you can reach out at http://skateguard1.blogspot.ca/p/contact.html.
Posted by Skate Guard Blog at August 17, 2016
Email ThisBlogThis!Share to TwitterShare to FacebookShare to Pinterest
Newer Post Older Post Home