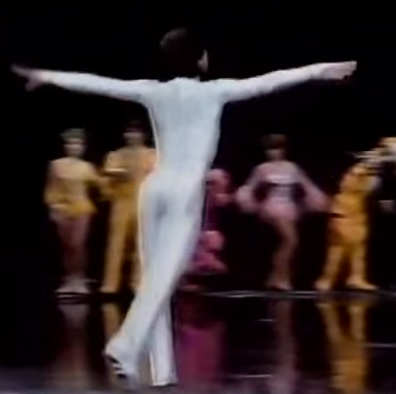 Having already covered his 1982 "Strawberry Ice" and 1985 "The True Gift Of Christmas" television specials on the blog, I really thought it was time that I revisited the Toller Cranston's much acclaimed series television specials and the lesser remembered gem "The Magic Planet".


Broadcast in both Canada and the U.S. on CTV and ABC in March of 1983, "The Magic Planet" was a futuristic ice odyssey like no other. It was narrated by none other than William Shatner himself and directed by David S. Acomba. Skating acts were fused with performances by dancers from the Alvin Ailey company of New York and the George Faison Dancers. Although music was provided by the London Symphony and recorded in England, it was scored and conducted by Canadian Paul Hoffert. Like in Toller's other specials, costuming was designed by Olympic Silver Medallist and two time World Champion Frances Dafoe. The cast included Cranston and actor/musicians Ann Jillian and Deniece Williams and skaters Brian Pockar, Sandra and Val Bezic and Wendy Burge.


The premise of the show was that of an astronaut (Cranston) having his NASA space capsule hit by an asteroid. When the craft lands on a strange "magic planet", Cranston's skating wins the the heart of the Queen Of The Outerworld People. Cranston's character is confronted by Fraze (Pockar), an evil leader of the Outerworld's rival Underworld. Fraze seeks the Queen (Burge)'s hand in marriage, but after a scuffle Fraze is banished from the Outerworld. Fraze abducts the Queen, taking her to his kingdom. A sorcerer approaches the astronaut and gives him a pair of magic skates which aid in his efforts to rescue the Queen.


In an 1983 interview regarding the show with Lynne St. David, Toller Cranston said "What's most exciting about Strawberry Ice and The Magic Planet is that we have been able to combine skating with the more traditional elements of entertainment, such as dance. It's ironic because in the field of entertainment, Canadians are usually thought to be two steps behind the United States, but this is an area where we are breaking new ground... working with the most sophisticated electronic equipment and techniques that television can provide, we were able to incorporate the different mediums into a visual delight. In all my travels, with all of the work I have done, the most clever and creative individuals I have worked with, bar none, have always been Canadians. My costume designer, Frances Dafoe, is a perfect example. She is better than anybody, the best internationally, but nobody knows her name." He claimed that his 1983 production "goes far beyond skating. Often you forget that the characters are on ice at all. A lot of people come up to me and say, 'You know, I never watch skating, but I watched your show.'"

"The Magic Planet" was classic Cranston at his best... great music, costuming, theatrics and skating melded together to create a unique storybook that (though at times a little kitschy) captures your imagination like a book you just can't put down. I still think that's what made Toller the enigma he was. You just couldn't look away.

Skate Guard is a blog dedicated to preserving the rich, colourful and fascinating history of figure skating and archives hundreds of compelling features and interviews in a searchable format for readers worldwide. Though there never has been nor will there be a charge for access to these resources, you taking the time to 'like' on the blog's Facebook page at http://www.facebook.com/SkateGuard would be so very much appreciated. Already 'liking'? Consider sharing this feature for others via social media. It would make all the difference in the blog reaching a wider audience. Have a question or comment regarding anything you have read here or have a suggestion for a topic related to figure skating history you would like to see covered? I'd love to hear from you! Learn the many ways you can reach out at http://skateguard1.blogspot.ca/p/contact.html.
Posted by Skate Guard Blog at August 09, 2016
Email ThisBlogThis!Share to TwitterShare to FacebookShare to Pinterest
Newer Post Older Post Home