Soda, Sulfur And Cow Hair: How Skating Rinks Got Their Start 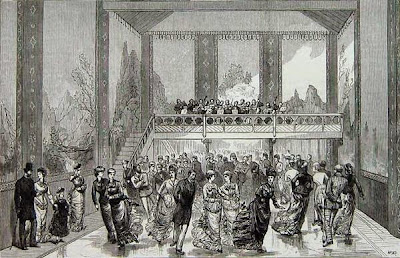 "A good skating rink under the proper conditions beats all the ballrooms in the world." - G.U.S. Vieth

Nothing is usually perfect on the first try. The story of The Glaciarium in London, England is a prime example. In 1841, Henry Kirk and William Bradwell orchestrated what is believed to be the world's first attempt at an artificial ice surface. Located in a seed room on the grounds of a nursery near Dorset Square, the surface of their 12 X 6 foot rink at the Egyptian Hall on Baker Street was a mix of alum, lard, salt and sulphur. Three years later, a second rink dubbed The Glaciarium And Frozen Lake opened on Grafton Street. A June edition of 1844's "Littell's Living Age" described this effort as "extremely convenient for such as may be desirous of engaging in the graceful and manly pastime of skating." Pamela Pilbeam's book "Madame Tussaud And The History Of Waxworks" explains that the ice in this rink was made of soda. Pilbeam also explained the first Glaciarium's appeal was pretty short lived. By 1845, the venue was renamed the Glypotheka and used to sell paintings. 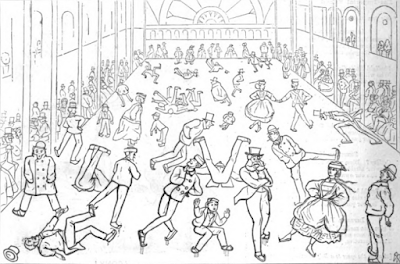 Over thirty years passed and during this period, a man named W.A. Parker discovered a process where ice could be made using carbonic acid and brine, which was believed suitable to withstand the hard use of a blade. In the early 1870's, William Newton developed an ice rink in New York using carbonic acid, ammonia gas and ether to develop the artificial ice but it to was short lived in its run. Back over the pond to the UK, it was John Gamgee who revived the idea of artificial skating rinks when he opened version 2.0 of The Glaciarium. Gamgee's Glaciarium was in a canvas shed with a small 24 X 16 ice surface. It was operated with a steam engine powering a heat exchanger in which sulphuric acid was used to cool glycerine. The glycerine was pumped through the ice to keep it frozen. The shed was reportedly insulated with concrete, dry earth, cow hair and tar. Copper pipes were buried in the ice. 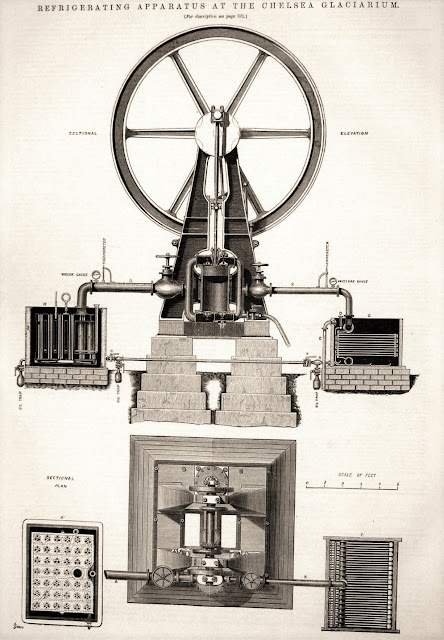 Version 3.0 of The Glaciarium - also created by Gamgee - was located behind an old Clock-House on Kings Road in Chelsea. It has been touted as the first 'real deal' by many and opened in the winter of 1876. It was a 40 X 24 rink with a forty five foot ceiling which operated on a membership only basis. It was marketed to the wealthy and featured painted Alpine scenery from Durand of Paris, a live orchestra and a gallery for spectators. That same winter, a second rink was developed in Charing Cross. The December 20, 1876 issue of "The Times" reported, "T3090 square feet of solid and transparent ice may be seen and used at the floating swimming baths on the Thames at Charing-cross, by the special permission of the Metropolitan Board of Works. The public have shown that they fully appreciated swimming in the Thames in summer, but the winter months found the floating structure empty. If, then, the equally delightful pastime of skating can be secured when bathers fail, a perennial attraction will be provided on the Thames Embankment... The floating baths were handed over to Mr. Gamgee on the 20th of October last and within two mouths two complete sets of machinery, with all the accessories neccessary for a Glaciarium, have been satisfactorily erected. The general principles of the floating Glaciarium are similar to those at Chelsea... They consist of the circulation of a current of glycerine and water through a series of metal tubes immersed in water, which is converted into ice and maintained in that condition. The details, however, are different. There are two ice machines with the necessary engines, one at each end of the structure. Each machine absorbs over 100,000 heat units per hour, and it is stated that this immense effect is obtained by utilizing about six-horse power per machine. The water of the Thames at a temperature of about 40 or 42 deg. Fahrenheit, pumped freely through the condenser, maintains the pressure in the machine at a minimum of one atmosphere and three-quarters, whereas the pressure in the refrigerator is only nominal and corresponds to the temperature of about 0 Fahrenheit. A rotary pump drives about 4,000 gallons of glycerine and water per hour through each refrigerator, and this cold liquid traverses through the tubes of the Glaciarium, and the water outside them is thoroughly frozen. The special difficulties in maintaining congelation at the Charing-cross baths arise from the great radiation from the iron structure which is caused by its immersion in the waters of the Thames and by the extensive area of glass roof covering the whole in, which greatly raisers the temperature of the internal atmosphere and is antagonistic to the development of artificial refrigeration. The desired result, however, has been attained, and on our visit to the Glaciarium yesterday, ice two inches thick was already formed and was skated upon, in the first instance, by two ladies." 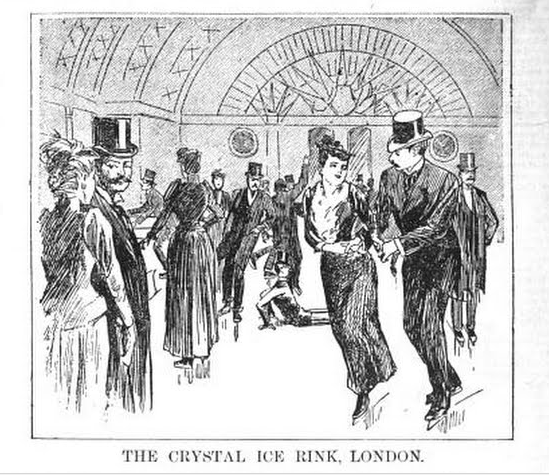 Gamgee's efforts inspired a string of copycats in Manchester and Southport. The Manchester rink lasted roughly a year; the Southport effort a good ten years before a lack of support forced it to shut down. In 1894, the Palais de Glaces in Paris opened its doors, followed four years later by the National Skating Palace on the Palladium site in London. Nigel Brown's wonderful 1959 book "Ice-Skating: A History" explained, "During this early stage excessive dampness and thick impenetrable mist pervaded these experimental ice-rinks and was the principal reason why their life was short. Skaters found them unhealthy places. But in the nineties real improvements were made, and good ice in comfortable conditions was now possible. The big capitals, London, Paris and New York, each had two rinks, and Brighton, Brussels, Munich, Philadelphia, Baltimore and Brooklyn one each. All these ice palaces were at first much frequented, for they were something new in entertainment, and the general public invaded them when the craze began. But this raised a problem for the serious skater, for crowded rinks gave him little chance to practice his figures. This was the main reason why the Prince's Skating Club in London came into being. It was a long hall in Knightsbridge with a sheet of ice 200 feet long and 50 feet wide, and exclusively for the use of members, the public not being admitted. Here at Princes, the elite off English skaters went through their paces."

Much like the steam engine used to filter sulfuric acid into Gamgee's rink pumped along, progress has powered on. We now live in a world that has artificial rinks in some of the world's most unlikely locations: Brazil, Kenya, Egypt and even on cruise ships on the high seas. Times have changed but we have à noxious rink of alum, lard, salt and sulphur to thank for getting the ball rolling.

Skate Guard is a blog dedicated to preserving the rich, colourful and fascinating history of figure skating and archives hundreds of compelling features and interviews in a searchable format for readers worldwide. Though there never has been nor will there be a charge for access to these resources, you taking the time to 'like' on the blog's Facebook page at http://www.facebook.com/SkateGuard would be so very much appreciated. Already 'liking'? Consider sharing this feature for others via social media. It would make all the difference in the blog reaching a wider audience. Have a question or comment regarding anything you have read here or have a suggestion for a topic related to figure skating history you would like to see covered? I'd love to hear from you! Learn the many ways you can reach out at http://skateguard1.blogspot.ca/p/contact.html.
Posted by Skate Guard Blog at September 03, 2016
Email ThisBlogThis!Share to TwitterShare to FacebookShare to Pinterest
Newer Post Older Post Home