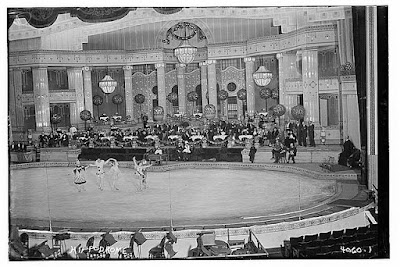 As a skating venue, New York City's Hippodrome Theater is probably best remembered by historians as the icy stage on which Germany's Charlotte Oelschlägel astonished American audiences. We recently revisited the Hippodrome when we recalled the lavish Dansants a Glace thrown by Mr. and Mrs. Irving Brokaw in the mid 1910's. Today we'll return and explore a largely forgotten competition held there that played an important role in American skating history.

For a time in the 1910's, The Hippodrome Challenge Cup was held annually. What made the event unique was that unlike the separate men's and women's singles events held during the era at the U.S. Championships, at the Hippodrome Challenge Cup both sexes were pitted against one another intentionally. Gender schmender... at the Hippodrome, it was about the best overall figure skater. In 1917, that skater just happened to be a woman.

The March 24, 1917 issue of The New York Tribune noted, "Miss Theresa Weld, of the Cambridge Skating Club of Boston stands today as the greatest amateur skater in this country, man or woman... competing against the best amateurs in the United States on the frozen stage of the Hippodrome. Nathaniel W. Niles, of Boston, and S.M. Lynes, of Brooklyn, generally recognized as the best of the men skaters, were forced to bow before the surpassing skill and grace of the girl from Boston, not only at the Continental Style of skating, but at the free figures. It was the first time in the last ten years, in any amateur or professional contest of any kind, that a woman had competed against and vanquished men." The article wasn't correct, as mixed sex competitions were common in Europe in Great Britain, Hungary and Austria during the era, but in North America, Weld's 1917 win was perhaps the first mention of a woman beating a man in head to head competition.

The progressive judges that gave credit where it was due were eminent men in the sport at the time: Irving Brokaw, James A. Cruikshank and George H. Browne. They were all pioneers in the sport in their own rights who had helped found clubs, penned books on the sport and had been instrumental in establishing the foothold of the Continental Style in America. The aforementioned article noted that "they were unanimous in their award of the championship to Miss Weld, although the contest between her and Niles and Lynes was a close one. It was when she finished her free skating exhibition that the judges decided in her favour... her technique being almost flawless and the easy grace with which she executed the most difficult of figures quite surpassing anything yet seen on the Hippodrome stage."

As if beating the men (including her pairs partner Niles) wasn't enough, Weld teamed up with A.M. Goodridge to compete in a waltzing competition held after the Challenge Cup, beating Niles and his partner Margaret Curtis in that event as well. Following the competition, professional star Charlotte Oelschlägel gave "a thrilling exhibition, while Annette Kellerman showed her versatility by making impromptu sketches of the contestants and distributing autographed copies as souvenirs."

The impression that Weld made at this competition was arguably a defining moment in opening the eyes of the American skating community to the fact that women were every bit as competitive as the men. By the next year at the same event, a reporter in The Bridgeport Times noted that the chance of any man unseating Weld "were very slim. In neither the school or free figures [do] the men skaters display the airy grace, delicate tracery and effortless movements shown by the women."

Had history taken a different trajectory, had the competition format of the Hippodrome Challenge Cup and the early days of the World Figure Skating Championships remained and men and women continued to compete against one another, what would the sport look like today? With the emphasis on points, on quadruple jumps, would fewer women be encouraged to take up the sport? Or would fewer men have taken to the ice, discouraged by losses to women? We'll never know.

Skate Guard is a blog dedicated to preserving the rich, colourful and fascinating history of figure skating and archives hundreds of compelling features and interviews in a searchable format for readers worldwide. Though there never has been nor will there be a charge for access to these resources, you taking the time to 'like' on the blog's Facebook page at http://www.facebook.com/SkateGuard would be so very much appreciated. Already 'liking'? Consider sharing this feature for others via social media. It would make all the difference in the blog reaching a wider audience. Have a question or comment regarding anything you have read here or have a suggestion for a topic related to figure skating history you would like to see covered? I'd love to hear from you! Learn the many ways you can reach out at http://skateguard1.blogspot.ca/p/contact.html.
Posted by Skate Guard Blog at September 08, 2016
Email ThisBlogThis!Share to TwitterShare to FacebookShare to Pinterest
Newer Post Older Post Home