Words Of Wisdom: Advice For The Ice From Howard Nicholson 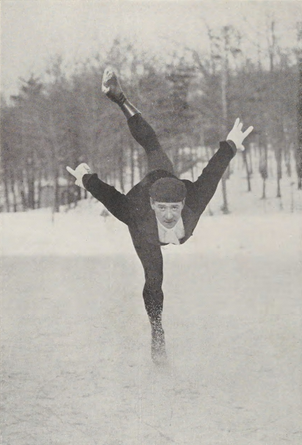 St. Paul, Minnesota's Howard Nicholson is perhaps best remembered as the long time coach of three time Olympic Gold Medallist and ten time World ChampionSonja Henie. That said, he was an excellent skater in his own right. While busy coaching Henie, from 1931 to 1933, Nicholson won the Open Professional Figure Skating Championships of Great Britain. An acclaimed specialist in school figure technique who taught in England, America and Switzerland, he wrote "Nicholson On Figure Skating" in 1933, which offered meticulous advice on mastering every figure in the NSA's tests at the time. In his instructional book, he also weighed in on free skating and even his star pupil. Today on the blog we will look back on some of his timeless advice and musings.

(on turns): "I know a great many people will not agree, but personally I am all against pulled, torn or forced turns; they are not my ideal of a turn, which ought to be a true clean edge, to a true clean edge, and naturally does not make much noise. Certainly pulled, torn or forced edges help the judges, as they generally mean 'safe' turns, and the judges have not got to look so carefully for double lines and changes, and naturally the noise impresses the spectators, but it generally means that the skater is the lucky possessor of very strong ankles or legs. Of course a heavy person is bound to cut more ice and so make more noise, but it does not necessarily mean a torn line in that case."


(on Sonja Henie): "Not only have I never had a pupil like Sonja, but I have never seen or imagined there could be a girl so wonderful and so brilliant. I am astounded at her ability to grasp almost immediately my suggestions, however new they may be to her. Difficult and complicated new steps which one would expect to spend months on, even with what it is the fashion to call a first-class skater (I mean anyone who has at least passed the gold medal standard) are performed after only a few lessons with an ease and grace which only an exceptional artist could possibly attain. The lady skater (or, if it comes to that, the man) who can defeat Miss Sonja Henie will not only be the best skater in the world, but, in my opinion, will be the best who has ever put on a pair of skates."

(on Sonja Henie): "It has been a great honour to have such a talented public as Frk. Sonja Henie; I spent many happy hours teaching her. I value tremendously the generous acknowledgment of my coaching she has made on her photograph." 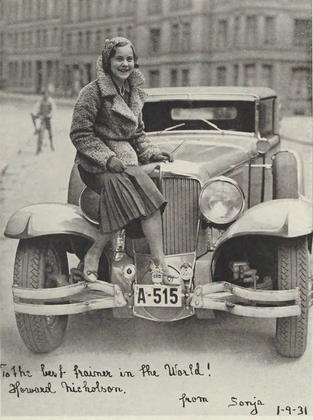 (on Backward Inside Loop Change Loops): "Just before the Change: straighten the tracing knee; raise the body from the hips; lift the free leg slightly higher, along the line of the tracing, but not too far from the ice; keep the back arched. Just at the Change: close the circle by covering the previous tracings; take the free leg quickly forward; the tracing arm right across the body and the free arm further back. The Change is made from the back part of the skate on the B.O. edge. Immediately after the Change: rebend the tracing knee well; lower the body back on the hips again, and look round the free shoulder for the previous B.I. Loop. Do all these movements for the Change as one continuous motion."

(on free skating): "A well thought out and placed programme is extremely effective and convincing. Running about the ice to get pace for a special spin or jump is not, to my mind, 'free skating.' Programmes should be as individual as possible, not just bad imitations of some 'star'. Much the best plan is for the skater to make up a programme and ask his, or her professional, or friends to criticize it and help with the execution. No professional can give a completely different programme to dozens of different pupils, besides that is not what I feel is meant by 'free skating'."

(on playing it safe): "So many people... want to try the most difficult spins or jumps, irrespective of the fact that they may be nervous and unable to bring off anything at all difficult to them, whereas it would have been quite possible to do something simpler, which would probably have been equally effective, and so not have spoilt their programme. Never lose sight of the fact, that it is better to do a less difficult thing well than a difficult thing badly." 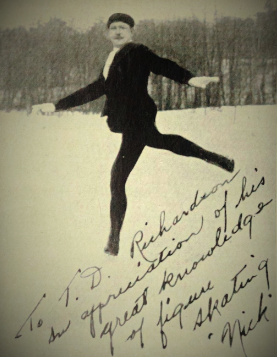 I don't know about you, but those last two lessons make a hell of a lot of sense, now don't they?

Skate Guard is a blog dedicated to preserving the rich, colourful and fascinating history of figure skating and archives hundreds of compelling features and interviews in a searchable format for readers worldwide. Though there never has been nor will there be a charge for access to these resources, you taking the time to 'like' on the blog's Facebook page at http://www.facebook.com/SkateGuard would be so very much appreciated. Already 'liking'? Consider sharing this feature for others via social media. It would make all the difference in the blog reaching a wider audience. Have a question or comment regarding anything you have read here or have a suggestion for a topic related to figure skating history you would like to see covered? I'd love to hear from you! Learn the many ways you can reach out at http://skateguard1.blogspot.ca/p/contact.html.
Posted by Skate Guard Blog at October 18, 2016
Email ThisBlogThis!Share to TwitterShare to FacebookShare to Pinterest
Newer Post Older Post Home