The Birth Of The Blues 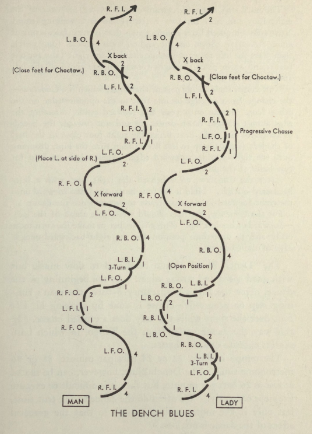 The Blues dance originated in England, the creation of British pairs skater and ice dancer Robert Dench. With partner Lesley Turner, Dench first showed off the long, deep edges of this dance at the Streatham rink in 1934. Set to twelve bar blues music played on a piano or organ, the dance was meant to be skated to a tempo of twenty two or two four bars per minute, or eighty eight or ninety six by the time of a metronome. However, Dench noted, "The Dench Blues, however, can be skated as fast as 26 bars per minute, but then it is difficult to execute the steps correctly. We often do the dance to fox trot time, but only if the music is slow enough so that the graceful effect of the dance is not lost."

The dance caught on extremely quickly both in Europe and overseas and enjoyed (like almost all compulsory dances) countless alterations and adaptations. By November 1939, it earned a coveted spot amongst the Kilian, Viennese Waltz, Rocker Foxtrot and Three-Lobed Eight Waltz in the USFSA's Gold Dance Test. However, in England during the same era, the National Skating Association only considered the Blues a Silver Test dance. By the fifties, it was considered a Pre-Gold Dance in the United States, a Second Class (Gold) Dance in France and a Silver Dance with the International Skating Union. Ironically, Robert Dench passed away in 1975, the same year the Blues was introduced as a prescribed rhythm for the OSP in international competition.

Whenever someone comes up with a great idea, it always seems to spawn others. In the years that followed, countless Blues dances cropped up in both North America and England. Many, like The Buckingham Blues, Koala Blues, Manhattan Blues and Border Blues, fell into obscurity. Others, like the perennial Preliminary Dance Baby Blues and Roy, Sue and Mark Bradshaw and Julie MacDonald's Midnight Blues (which debuted in Vancouver in 2001) caught on like wildfire. Though we don't have the pleasure of enjoying compulsory dances in international competitions these days, the influence of the original Blues dance still resonates in the performances of ice dancers from Streatham to South Africa today.

Skate Guard is a blog dedicated to preserving the rich, colourful and fascinating history of figure skating and archives hundreds of compelling features and interviews in a searchable format for readers worldwide. Though there never has been nor will there be a charge for access to these resources, you taking the time to 'like' on the blog's Facebook page at http://www.facebook.com/SkateGuard would be so very much appreciated. Already 'liking'? Consider sharing this feature for others via social media. It would make all the difference in the blog reaching a wider audience. Have a question or comment regarding anything you have read here or have a suggestion for a topic related to figure skating history you would like to see covered? I'd love to hear from you! Learn the many ways you can reach out at http://skateguard1.blogspot.ca/p/contact.html.
Posted by Skate Guard Blog at November 15, 2016
Email ThisBlogThis!Share to TwitterShare to FacebookShare to Pinterest
Newer Post Older Post Home