A Little Look At Lifts 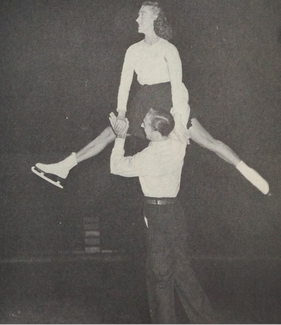 Although we have certainly explored a wide range of topics in figure skating history to this point, it seems like pairs skating often gets the short end of the stick. I wanted to rectify that today by taking a little look into the early history of lifts in pairs skating.

In his 1959 book "Ice-Skating: A History", figure skating historian Nigel Brown noted that "pair-skating which had been originally recognized by the International Skating Union in 1908 when the first World Championships in that event was staged in St. Petersburg, continued to be practiced for the next fifteen years along the classic lines of its inception. Three schools of influence combined in designing the classic expression of pair-skating at the beginning of the century. The English school which very early furnished world champions in this branch emphasized a pleasing choreographic structure of programme executed with a certain technical precision. The Viennese school which introduced spirals and spins into pair programmes concentrated on dance steps, speedily and gracefully executed. The German school whose representatives captured the first world pair title gave full expression to the movement of limbs producing a theatrical effect." The introductions of 'field figures' (each partner performing the same school figures far apart) and shadow skating by T.D. and Mildred Richardson, were both first met with opposition but became important components of early pairs skating programs.

Early forays in adding lifts to programs by The Brunet's and Lily Scholz and Otto Kaiser (a weightlifter) were met with the same controversy shadow skating once received. Brown noted that "lifts were received with mixed feelings and regarded with distaste by many. Some looked upon lifts as acrobatics which did not belong to pure skating. There certainly was a crudity about them when first introduced, but no medium could be more adapted for expressing aerial grace than skating." 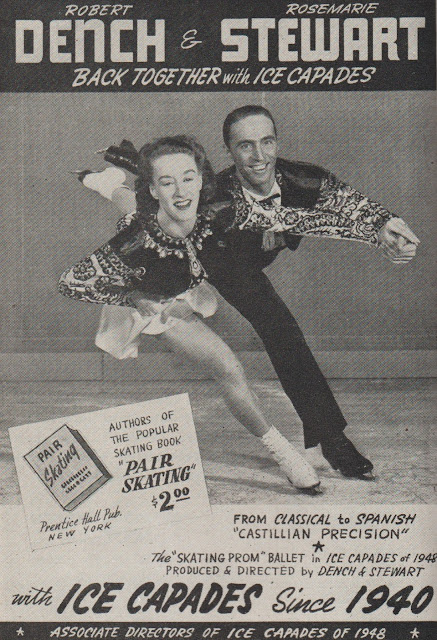 1936 Olympian Rosemarie Stewart and her husband Robert Dench, who emigrated from Great Britain to California in 1940 and became stars of the Ice Capades, penned a 1943 book called "Pair Skating And Dancing On Ice". It is one of the earliest books that offers any sort of concise glimpse into which elements pairs teams were including in their programs during this era. Stewart and Dench offer a clear distinction between lifts and carries: "For a lift, the man raises his partner from the ice, turning her with a continuous movement in the air, and places her back on the ice; for a carry, he picks up his partner from the ice and holds her in the air as long as he wishes before setting her down. The former is a continuous movement; the latter is sustained... Carries are not allowed in competition, as they are considered 'strong-man stuff.' You should therefore reserve them for exhibitions, and only use lifts in your competitive program." 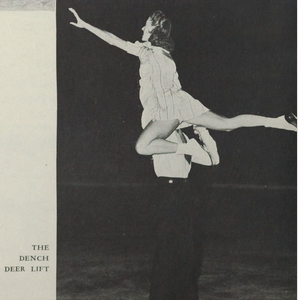 Lifts described by Stewart and Dench are the Flying Three Jump Lift, The Deer Lift and their own variation The Dench Deer Lift, The Loop Lift, The Half-Turn Split Lift and The Stewart Split Lift. I want to focus particularly on the latter, as it offers some insight into the origin of the twist lift. Whereas the description of The Half-Turn Split Lift describes skaters skating face to face and the woman picking the toe of her free leg into the ice behind and jumping up into an assisted split position as the man lifts her, The Stewart Split Lift is describes thusly: "The full-turn split lift was originated by Miss Stewart before the last Olympic Games when she was skating with Mr. Ernest Yates of England. It starts like the split lift, just described, but then both skaters make a complete revolution instead of a half-turn. The lady finishes on her backward-inside edge; the man on his forward inside. Both then take up a horizontal spiral position... The lady must prepare for her jump exactly as she would for a solo split jump. As she jumps, the man makes the lift and at the same time starts the turn." Aside from spectacular carries that Stewart and Dench would have included in their professional programs, many of the lifts they described would be more along the lines of what we see in ice dancing these days, and the ISU didn't help in terms of really firmly clarifying its stance on lifts during that era. 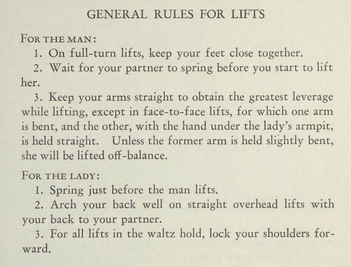 Resolutions of the 1937 ISU Congress in St. Moritz pertaining to what pairs could and couldn't perform in competition were surprisingly vague: "Pair skating is the free skating of two persons, who must skate figures giving a homogeneous (uniform) impression of both. Both partners need not always perform the same movements. They may separate from time to time, but they must give an impression of unison and harmonious competition. No figures are permissible in which one of the skaters, by the effort of the other, is lifted above the surface of the ice for a considerable time [such as in a carry]; jumps are raising and lowering one partner by means of a swing, are not allowed. [This obviously means trick movements]."


Although The Brunet's made strides with the introduction of the first one-handed lift in amateur competition during their time at the top, it wouldn't be until the fifties that Frances Dafoe and Norris Bowden would introduce the first true lasso and twist lifts into the skating vocabulary. Dafoe and Bowden are also credited as originators of both throw jumps and the Leap Of Faith, whereas Maxi Herber and Ernst Baier are noted for introducing side-by-side jumps to the repertoire of elements pairs performed. Without getting into a timeline of who invented what lift - when, where and why - I do want to stress that what has made the development of the elements in pairs skating so particularly unique is that innovation has remained continuous. In singles skating, you have six set jumps that most skaters include in their programs. In pairs skating, innovation in lifts is constant as rules perpetually change. Lifts have come a long way, baby... and they will continue to for years to come.

Skate Guard is a blog dedicated to preserving the rich, colourful and fascinating history of figure skating and archives hundreds of compelling features and interviews in a searchable format for readers worldwide. Though there never has been nor will there be a charge for access to these resources, you taking the time to 'like' on the blog's Facebook page at http://www.facebook.com/SkateGuard would be so very much appreciated. Already 'liking'? Consider sharing this feature for others via social media. It would make all the difference in the blog reaching a wider audience. Have a question or comment regarding anything you have read here or have a suggestion for a topic related to figure skating history you would like to see covered? I'd love to hear from you! Learn the many ways you can reach out at http://skateguard1.blogspot.ca/p/contact.html.
Posted by Skate Guard Blog at December 15, 2016
Email ThisBlogThis!Share to TwitterShare to FacebookShare to Pinterest
Newer Post Older Post Home