How The Attack On Pearl Harbor Affected The Skating World 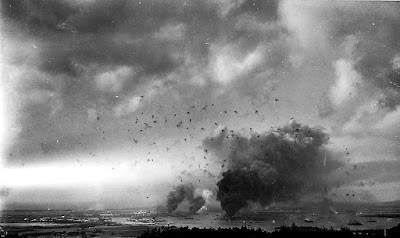 Seventy five years ago, the Imperial Japanese Army's surprise attack on Pearl Harbor changed the course of World War II and world history. It was that generation's 9/11; every American who lived through it could tell you where they were when the attack happened. And yes, "every American" included every American figure skater.


Prior to the December 7, 1941 attack, the military personnel stationed at Pearl Harbor had shown great interest in America's favourite winter sport. In a letter penned to Earle Reynolds, one Private Rodecker, a skater stationed in Pearl Harbor, wrote that copies that Reynolds had sent him of "Billboard" magazine magazine "practically wore out in a few days from passing it around to the boys who were anxious to read of skating activities in the States." In the wake of the tragedy, the skating world responded immediately to help support those stationed in Hawaii. Alfred Richards Sr. (the father of reigning U.S. ice dance champion Alfred Richards Jr.) arranged for Dr. I.S. Ravelin to go to Pearl Harbor to find out the extent of the attack. With Perrin H. Long, Ravelin penned a report on the casualties of the tragedy for the Naval Medical Bulletin in April 1942. The Philadelphia Skating Club and Humane Society even arranged for a mobile unit of The Red Cross to visit their club. Skaters donated over two hundred and sixty five pints of blood.


One skater whose life was directly affected was U.S. and North American Champion Joan Tozzer Spalding. At the time of the bombing, she was living in Honolulu, Hawaii. Her son later recalled hiding under a bed with his nanny during the attack. After the U.S. joined the War, Tozzer Spalding joined the Army’s Woman’s Air Raid Defense and the USO, aiding in the war effort by working in a top-secret, underground mapping program.


Tozzer Spalding wasn't the only skater living in Hawaii at the time of the attack. Kathe Mehl Williams was en route with her family to Pearl City to go fishing and passed Pearl Harbor as the attack started. A hot shell fragment hit their car and her father immediately reported to duty. All non-permanent residents that weren't on active duty were asked to return home immediately, and so Mehl Williams and her mother headed back to New York where she teamed up with Robert Swenning. The duo later won the gold medal in ice dance in front of a hometown crowd at the 1945 U.S. Championships, defeating reigning champions Marcella May Willis and James Lochead.

In the years directly following Pearl Harbor, the increased number of skaters who entered the military had an extreme effect on the American figure skating community. With so many young men drafted and transplanted in other parts of the country, one club's loss was another's gain in some cases but in others, promising careers were cut short by their service. We may not think of Hawaii when we consider the evolution of figure skating but on that one day in 1941, world events undoubtedly altered the course of skating history.

Skate Guard is a blog dedicated to preserving the rich, colourful and fascinating history of figure skating and archives hundreds of compelling features and interviews in a searchable format for readers worldwide. Though there never has been nor will there be a charge for access to these resources, you taking the time to 'like' on the blog's Facebook page at http://www.facebook.com/SkateGuard would be so very much appreciated. Already 'liking'? Consider sharing this feature for others via social media. It would make all the difference in the blog reaching a wider audience. Have a question or comment regarding anything you have read here or have a suggestion for a topic related to figure skating history you would like to see covered? I'd love to hear from you! Learn the many ways you can reach out at http://skateguard1.blogspot.ca/p/contact.html.
Posted by Skate Guard Blog at December 06, 2016
Email ThisBlogThis!Share to TwitterShare to FacebookShare to Pinterest
Newer Post Older Post Home
"As a rule an author has one or two popular ways of contrasting the past with the present. He can treat the past as lying in comparative doleful ignorance, or he can explain that the past was infinitely superior to the day we live in. Of course, either method is the popular journalism of the moment, and in reality there is no sharp contrast, but a gradual transition which leads the past into the present." - Joel B. Liberman, Skating Club Of New York