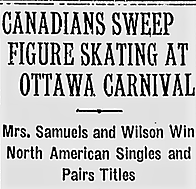 Last held in 1971, the U.S. versus Canada equivalent to the European Championships was, as far as international figure skating competitions go, was prestigious as they come. Olympic Gold Medallists like Dick Button, Peggy Fleming, Tenley Albright, Barbara Ann Scott King, Hayes and Carol Heiss Jenkins, David Jenkins and Barbara Wagner and Bob Paul were among the many skaters who claimed North American titles over the years. Today's blog will take a look back at the fifth of those biennal competitions - the 1931 North American Figure Skating Championships in Ottawa, Ontario. 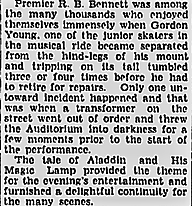 Held in conjunction with Ottawa's Winter Carnival Week at the city's Auditorium, the 1931 competition was organized under the auspices of the Minto Skating Club. In conjunction with the competition, on the second and third day the club presented their hugely popular 'Minto Follies' ice show. The theme for that year was "Aladdin And His Magic Lamp" and many of the competitors were playing double duty in both the show and competition in front of a capacity crowd of eight thousand people. Funds raised benefited "the crippled children's fund" and guest stars of that year's Minto Follies included the inimitable Eddie Shipstad and Oscar Johnson.

There were six judges in total for all phases of the competition: three from Canada and three from the U.S. Most notable on the panel was Theresa Weld Blanchard, who at that time was still actively competing. The organizing committee of the event included Douglas Henry Nelles and Melville Rogers of the Minto Skating Club, Sherwin Badger and Richard L. Hapgood. Interestingly, both Badger and Rogers played double duty as both officials and competitors in the event. 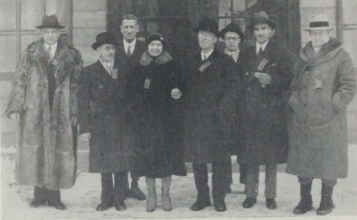 Judges at the 1931 North American Championships

Ice dance wasn't yet added to the bill of the event and wouldn't be officially until 1947 but in addition to men's, ladies and pairs skating competitions, an important part of the North American Championships was the friendly contest for the Connaught Trophy in fours skating, which was actually a two parter. According to Irving Brokaw's book "The Art Of Skating", fours teams going for the Connaught Trophy had to perform both compulsory figures "to be skated without music" and a free skating program where "each four shall skate five minutes free skating to music. They shall skate in unison, but not necessarily to center." The Connaught Trophy in 1931 was won by the Canadian team of Frances Claudet, Kathleen Lopdell, Melville Rogers and Guy Owen, who managed to keep the trophy in Canada despite Rogers' injury which kept him out of the men's event. In second were the Granite Club four of Cecil and Maude Smith, Stewart Reburn and Jack Eastwood and in third were the Toronto four of Mary Littlejohn, Elizabeth Fisher, Jack Hose and Hubert Sprott.

The pairs competition in 1931 was a bit of an upset. The gold medal went to the brother and sister team of Constance and Montgomery 'Bud' Wilson of Toronto and the silver to another Canadian team, Frances Claudet and Chauncey Bangs of Ottawa. The bronze went to U.S. Champions Beatrix Loughran and Sherwin Badger of New York City, who won the bronze medal AHEAD of the Wilson siblings at the previous year's World Championships. The Americans were the absolute favourites going in. Finishing off the podium were two promising teams representing the Granite Skating Club, Cecil Smith and Stewart Reburn and Maude Smith and Jack Eastwood. Claudet and Bangs' performance during the 1931 season actually caused a great deal of confusion with the judges as it gave the appearance more of an early free dance than a pairs program. According to Lynn Copley-Graves' veritable bible of ice dancing history "The Evolution Of Dance On Ice", Claudet and Bangs "never separated and had no highlights" (jumps, spins, lifts) and this really threw the judges for a tailspin. 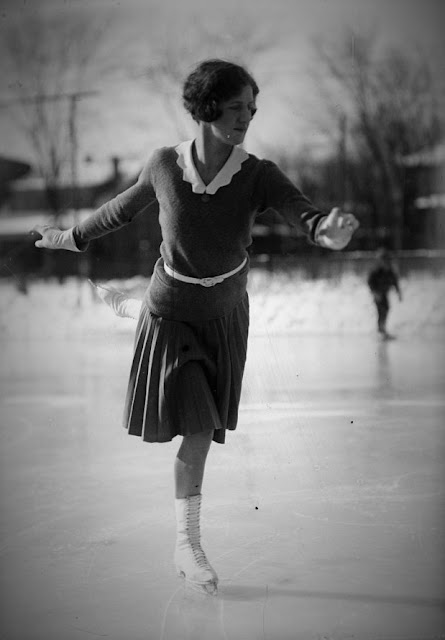 Adding to her gold medal in the pairs event, Constance Wilson of the Toronto Skating Club handily took home the ladies title as well, finishing ahead of clubmate Elizabeth Fisher and Edith Secord, originally from Ottawa but representing New York in this event. Missing the podium was Minneapolis' Margaret Bennett.

Among the men, the favourite heading into the event was Bud Wilson, who had finished fourth in the men's event at the 1930 World Championships in New York City. He faced quite a fight from U.S. Junior Champion Gail Borden of New York City, who had finished sixth at the 1930 World Championships. Borden was known as quite an athletic skater. The "Ottawa Citizen" raved that the American's "rendition of the various jumps is about the best to be seen on the continent." Ultimately, Wilson made it a clean sweep in all four disciplines for Canada, decisively taking the gold medal. Borden was third and another skater from New York, James Lester Madden, claimed the silver medal. Finishing fourth was Lewis Elkin of the Winnipeg Winter Club. On Wilson's win, The February 6, 1931 edition of the "Montreal Gazette" noted, "In addition to performing his compulsory school figures with great precision, he gave a beautiful exhibition of free skating."

The medal sweep for Canada at the 1931 North American Championships could not have come at a better time. Earlier that same month, Louis Rubenstein, the grandfather of Canadian skating had passed away and his loss would have certainly been felt in the Canadian skating community. What a wonderful testament to his lifelong dedication to developing skating in the country the events in Ottawa that winter proved to be. The future looked bright... and it was.

Skate Guard is a blog dedicated to preserving the rich, colourful and fascinating history of figure skating and archives hundreds of compelling features and interviews in a searchable format for readers worldwide. Though there never has been nor will there be a charge for access to these resources, you taking the time to 'like' on the blog's Facebook page at http://www.facebook.com/SkateGuard would be so very much appreciated. Already 'liking'? Consider sharing this feature for others via social media. It would make all the difference in the blog reaching a wider audience. Have a question or comment regarding anything you have read here or have a suggestion for a topic related figure skating history you would like to see covered? I'd love to hear from you! Learn the many ways you can reach out at http://skateguard1.blogspot.ca/p/contact.html.
Posted by Skate Guard Blog at March 09, 2017
Email ThisBlogThis!Share to TwitterShare to FacebookShare to Pinterest
Newer Post Older Post Home