Blades In The Bullring: Mexico's Surprising Introduction To Figure Skating 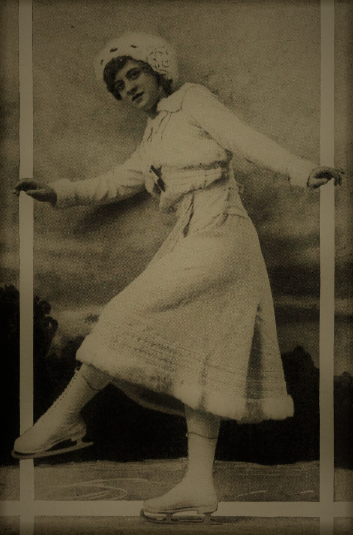 At the 1988 Winter Olympic Games in Calgary, Mexican figure skaters got their first real taste of the big leagues. Things went as expected; both Diana Encinas Evans and Ricardo Olavarietta were cut after the school figures and short program. Being 'new kids on the block' from a country better known for its sunny beaches than its skating rinks, they were certainly at a disadvantage as compared to the Brian's and the Carmen's that year. Little did most viewers gleefully guffawing at the snafus of the south of the border skaters realize at the time was the fact that Mexico enjoyed a surprising ice skating boom as far back as the roaring twenties.

Dr. Anselm Goetzel was a well known composer in his day. He wrote "The Lilac Domino", which was presented by The Andreas Dippel Opera Company at the Alvin Theater in Pittsburgh in 1915, three Broadway plays - "Aphrodite", "The Gold Diggers" and "The Royal Vagabond" and in 1920, through his company Goetzel Theatrical Enterprises, presented the musical play "The Unknown Flower." While working as a musical director at the Hippodrome in New York, he fell in love with German skater Charlotte Oelschlägel. The pair eloped in 1922 and while honeymooning in Atlantic City, Goetzel was contracted for the presentation of an ice ballet starring his new bride in Mexico City that June.... in a bullring. Keep in mind this was in the twenties!

The original plan was that the newlyweds would leave New York at the end of May so that they would have a full month for Goetzel to have the two ice making plants they were bringing with them set up. The bullring where the show was to take place had seating for twenty three thousand people and the show was contracted for a six week run. From the start, it appeared doomed. On July 5, 1922 (over a month after they originally supposed to leave) the "New York Clipper" reported, "Charlotte, the famous skater, left of Friday of last week, with her husband, Dr. [Anselm] Goetzel, for Mexico City where she will appear in a new revue produced and staged by Goetzel. Up until Wednesday of last week it was not known whether or not the contract calling for this production in Mexico will be fulfilled, insomuch as the bull ring which is to converted into an open air ice palace for the venture, was condemned by the government as being unsafe. However, the proprietor posted a bond with the Government of Mexico that the faulty seating accommodations which were the basis of the complaint would be remedied, and Goetzel received word to proceed to Mexico." Primary source accounts of the production are scant, but Arthur Goodfellow's fabulous 1972 book "Wonderful world of skates; seventeen centuries of skating" does allude to the fact that "things didn't run quite so smoothly as at the Hippodrome, scene of her greatest triumphs."

Charlotte's show at the bullring cannot have all bad. Only two years later, newspapers were raving about how the Mexican people had taken to ice skating like bigots to a Republican rally. On September 19, 1923, the "Daily Illini" reported that "Mexico has 'gone wild' about ice-skating. It's the newest fad. An ice-skating rink has been established by a club in the Hotel Regis and the rink is crowded daily. In many instances this is the first time the Mexicans have had an opportunity to skate. Professional skaters from New York and Chicago are showing the local skaters fancy skating." It wasn't a passing fad. Ultimately, Charlotte and her troupe left Mexico early due to dangerous conditions. This would have been near the end of Alvaro Obregón's term as the President of Mexico.

In 1945, Dorothy 'Dot' Franey brought a small unit down to Mexico City to do shows. By February of 1946, a new bullring was built with seating for forty seven thousand in Mexico City with plans to include an ice skating rink in the design. The following year, Morris Chalfen took his lavish Holiday On Ice tour to Mexico City and Guadalajara, inspiring awe in the Mexican people fortunate enough to witness the spectacle. In 1948, Robert Campbell recalled, "They packed the big National Arena twice nightly almost every day they were there. Going over the rugged Laredo crossing to and from Mexico the regular tractors had to be augmented with heavy diesel tractors to haul the machinery over the mountains. The engineers responsible for making the ice are proud of the fact that the show has never been delayed due to the fact that the ice surface was not ready on time, although in a couple of instances the ice was pretty thin and they kept their fingers crossed while the skaters performed."

By the early sixties, so popular was ice skating that the five hundred thousand dollar cost of building the Pista Olimpa ice rink on the Marino Escobedo at Horacia was paid off in one year. Joseph Prendergast, a thirty six year old Canadian geophycisist in Mexico City working for the United Nations helped form an ice hockey league - the Asociacion de Hockey Sobre Hielo del D.F. - at the Pista and by 1964, the country had two more ice rinks. Prendergast said, "It's fantastic the way Mexicans are taking to ice skating... At least 5,000 people are now regular ice skating fans... You often see skaters lined up for blocks waiting to get in the rink... They may be a little optimistic. When they come up against the Canadians, Americans or Europeans, they'll wonder why they bothered. But, at least, it gives you an idea about how enthusiastic the Mexicans are about ice skating."

The Ogilvie's visited the Pista de Hielo and Pista Olimpa rinks in 1967 and described them thusly in "Skating" magazine: "The [Pista de Hielo] was studio-type rink about, 75 by 50, where one could rent skates for eight pesos (64 cents) or skate for a mere 48 cents if you brought your own. The genial manager was delighted to show us around, especially on learning that we were professional skaters from the States. The rink was well-kept and the rental equipment in good order... The [Pista Olimpa] was a modern, full-size rink [with] generous seating capacity and Zamboni equipment. As with other city rinks, it operates year-round and appears to be efficiently run and clean... From our observations, a general picture of skating in Mexico emerges. The sport is clearly at a rudimentary stage. There is a great need for instructors to raise the level of figure skating, but it will be difficult to attract professionals because of the requirements for working permits and the wage scale - 10 pesos or 80 cents an hour!"

It may have taken over two decades from the day the Pista Olimpa opened its doors before a Mexican skater first skated on Olympic ice, but in a way it seems fitting that the year they did it was another German great like Charlotte - this time Katarina Witt - that they bowed down to.

Skate Guard is a blog dedicated to preserving the rich, colourful and fascinating history of figure skating and archives hundreds of compelling features and interviews in a searchable format for readers worldwide. Though there never has been nor will there be a charge for access to these resources, you taking the time to 'like' on the blog's Facebook page at http://www.facebook.com/SkateGuard would be so very much appreciated. Already 'liking'? Consider sharing this feature for others via social media. It would make all the difference in the blog reaching a wider audience. Have a question or comment regarding anything you have read here or have a suggestion for a topic related to figure skating history you would like to see covered? I'd love to hear from you! Learn the many ways you can reach out at http://skateguard1.blogspot.ca/p/contact.html.
Posted by Skate Guard Blog at April 15, 2017
Email ThisBlogThis!Share to TwitterShare to FacebookShare to Pinterest
Newer Post Older Post Home