The three men whose stories we're going to explore today on the blog both have three things in common. They were born in Europe, they won medals at the U.S. Figure Skating Championships in the roaring twenties and they worked tirelessly behind the scenes as 'builders' in the figure skating world in their era. Their names may not ring a bell, but their stories are nothing short of compelling. Time to meet Julius Nelson, Karl Engel and Chris Christenson! 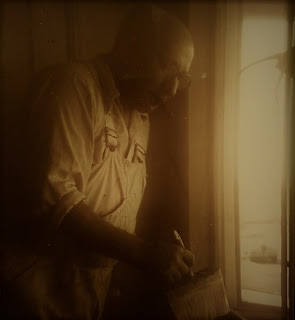 The son of Nils and Lisa Maria Johansson, Julius Bernhard Johansson was born April 22, 1887 in Åsa, Småland, Sweden. He arrived in America on the S.S. Caronia at the age of twenty three in June 1910 - changing his name to Julius Bernhard Nilsson and then Julius Bernhard Nelson - and boarded on a farm in Douglas, Minnesota with two Swedish brothers. 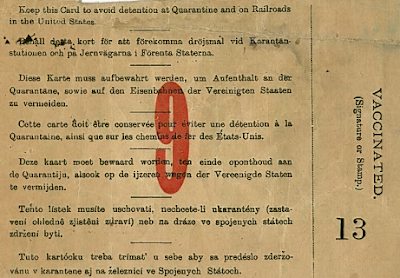 Julius' relative Per Anders Johannssen theorized, "I fully understand why he changed his name from Johansson to something else. English (or American-English) speaking persons just can't pronounce the name 'Johansson'. When they try the result sounds ridiculous. I guess he couldn't bear that. So - I guess - he took his father's first name, Nils, and made a patronymicon of that, and at the same time [anglicised] it. Et voilà - his name then was Nelson." His great granddaughter Emily Abraham added, "Family lore has it that the last name was later changed to Nilsson because of an overabundance of Johansson's in the area." 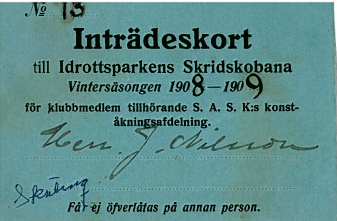 Though he registered for the draft late in World War I, Julius was fortunate not to have found his American dream cut short by military service. A talented skater who had learned to skate at the Stockholms Allmänna Skridskoklubb, Nelson arrived in Minneapolis in 1917 and began teaching skaters from Minnesota the Swedish style of figure skating. He travelled the midwest during the post-war era and the roaring twenties, offering his expertise to skaters in Duluth, Superior, Grand Forks and Fargo. The Hippodrome Club, an enclosed natural ice surface on the State Fair Grounds in St. Paul was for several winters his home base. In 1923, he entered the U.S. Figure Skating Championships in New Haven, Connecticut, finishing third in the senior men's event behind Sherwin Badger and Chris I. Christenson. Later credited as the man responsible for introducing the International Style of skating to the Northwestern United States, Julius had a hand in the early development of many of the region's star skaters. Roy W. McDaniel recalled Julius thusly: "A fine stylist... His skating and counsel had a tremendous and far reaching effect on northwestern skating. Margaret Bennett, Roy Shipstad, Erle Reiter and [Bobby] Specht were some of his early pupils." 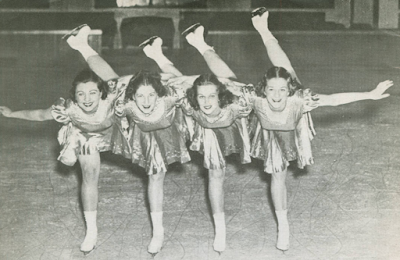 The Nelson Sisters skating in the Ice Follies in 1938

During The Great Depression, Julius turned to painting and interior design to support his wife Ella, son Bernhard and daughters Marie, Vera, Virginia and Martha. However, he continued to perform in skating carnivals throughout the Midwest well into the forties.  His daughters Marie, Vera and Virginia - joined by a fourth woman named Genevieve - appeared in the Ice Follies as a fours act billed as The Nelson Sisters. Julius' daughter Martha, a talented skater in her own right, was to have been the fourth Nelson sister but instead chose to attend a bible college.

Julius Nelson passed away on August 22, 1962 at the age of seventy five, his pioneering efforts in developing figure skating in the Midwestern United States all but forgotten today.

Born January 16, 1891 in the historic town of Bienne, Switzerland, Karl (Carl) Rudolf Engel emigrated to the United States in June 1913 at the age of twenty two after serving three months with the Swiss military. After arriving at Ellis Island, he took up residence in New York City and worked for a time as a draftsman on Broadway before a short stint with the U.S. military in World War I. While in the Big Apple, Engel amazed the locals with his proficiency on ice skates and joined the Skating Club of New York... which actually speaks a great deal to his ability as a skater as the rather exclusive club wouldn't exactly have welcomed a lowly draftsman with open arms had he not been particularly impressive. He proved his mettle at an international figure skating competition that was later deemed to be the 1918 U.S. Figure Skating Championships, where he placed second behind Nathaniel Niles of Boston.

Following his win, Engel headed west and found a job as a civil engineer in a paper mill in Chicago, taking up residence in a small rooming house operated by a Scottish woman named Christine Gregory and her daughters Alice and Grace. Work was a means to an end for Engel, who spent more of his free time tracing eights and threes on the ice in the winters than socializing with the Gregory women. In 1921, he was one of a group of twenty skating aficionados who formed the Chicago Figure Skating Club. In those days, skaters took to the ice at an outdoor rinks adjacent to the Chicago Beach Hotel and Edgewater Beach Hotel, and on ponds in the Forest Preserve. The club was accepted as one of the USFSA's original seven member clubs and that same year, Engel and Charles McCarthy became the first two skaters to represent the club at the U.S. Figure Skating Championships in Philadelphia. During that period, Engel served as Chicago Figure Skating Club's President, a judge and worked with McCarthy and Henry Denninger to bring USFSA testing in figures, free skating and ice dancing to the Windy City. It was through the club's organization that he met Margaret 'Maggie' Robb, who soon became Mrs. Karl Engel.

In 1925, Engel travelled to New York City for U.S. Figure Skating Championships, where he won his second medal (a bronze) in the men's event behind Nathaniel Niles and George Braakman. He soon relocated to Orangetown, New York and took a job as a mechanical engineer in a paper factory and rejoined the Skating Club of New York. In 1938, Engel and his wife Maggie headed to California, where they were warmly received as the first 'imported' judges from the East Coast at the Pacific Coast Championships at the St. Moritz Ice Skating Club. The Engel's moved to Chesterton, Indiana during World War II and remained active in skating circles - judging both ice and roller competitions - for some time thereafter. 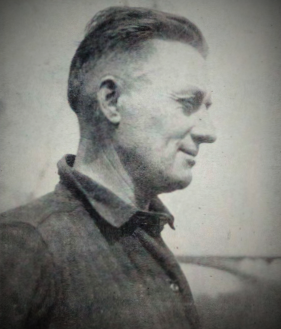 Born in Norway on June 2, 1875, Chris I. Christenson emigrated to St. Paul, Minnesota when he was eight years of age. Throughout much of his young life he toiled away as a labourer to help contribute to his family. Yet, as all work and no play make Jack a dull boy, Christenson found time to pursue and excel at all manner of Victorian era pursuits: swimming, gymnastics, fancy diving, cycling and roller skating. He wasn't a dull Jack; he was a Jack of all trades! In 1914, at the age of thirty nine, he decided to add another to the list... figure skating. Carving his way through grapevines on frozen ponds and cranberry bogs near his home, he coined the term "swamp skating" according to Joseph Chapman. On those 'swamps', he soon achieved the same proficiency that he'd achieved on rollers. Off the ice, he worked for the Northern Pacific Railroad.

In 1919, the Minnesota Skating Association, a charter member of the USFSA interested in International Style skating formed. Its skaters met at St. Paul's Lexington Rink. Christensen didn't just prove to be one of the club's most enthusiastic new members... he stepped up as the Association's first President. Two years later, another USFSA charter member club was formed in St. Paul called the Twin City Club. This club absorbed the membership of the Minnesota Skating Association and the Minneapolis Municipal Figure Skating Club, and Christenson served of the first President of that club as well. 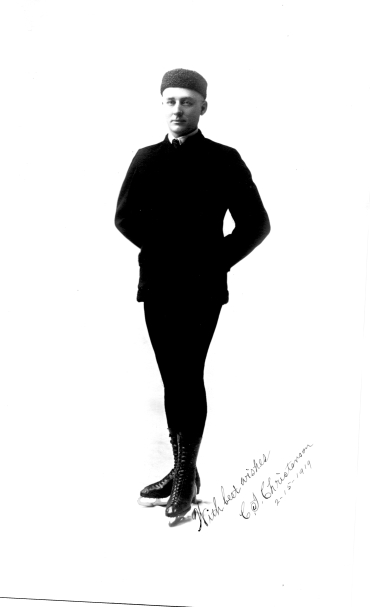 After placing fourth at the 1921 U.S. Figure Skating Championships in Philadelphia, Christenson made the trip from St. Paul to New Haven, Connecticut for the 1923 U.S. Championships, where he surprised many by winning the silver medal behind Sherwin Badger. After winning the bronze in 1924 in Philadelphia, he entered the 1926 U.S. Championships in Boston, Massachusetts, where he defeated hometown favourite Nathaniel Niles to win the gold... at the age of fifty one. An unattributed newspaper 1926 article cited in a 1996 "New York Times" piece published around the time of Rudy Galindo's U.S. title win reportedly noted, "His figures were smooth and precisely correct. He looped and spread-eagled with an unhurried calm that must have piled point after point in his favor on the score-pads of the judges. But his was an exhibition of mathematical certainty. It was a typically masculine performance, devoid of teeming nervous energy and one of cold and accurate calculation." After his competitive career ended, Christenson became an international level judge. Though he passed away on March 8, 1943, Christenson remains the oldest U.S. men's champion in history... a distinction I'd bet my cat (sorry Angelikah!) that he'll never lose.

Skate Guard is a blog dedicated to preserving the rich, colourful and fascinating history of figure skating and archives hundreds of compelling features and interviews in a searchable format for readers worldwide. Though there never has been nor will there be a charge for access to these resources, you taking the time to 'like' on the blog's Facebook page at http://www.facebook.com/SkateGuard would be so very much appreciated. Already 'liking'? Consider sharing this feature for others via social media. It would make all the difference in the blog reaching a wider audience. Have a question or comment regarding anything you have read here or have a suggestion for a topic related to figure skating history you would like to see covered? I'd love to hear from you! Learn the many ways you can reach out at http://skateguard1.blogspot.ca/p/contact.html.
Posted by Skate Guard Blog at June 19, 2017
Email ThisBlogThis!Share to TwitterShare to FacebookShare to Pinterest
Newer Post Older Post Home