Get Buck In Here: The Angelika and Erich Buck Story 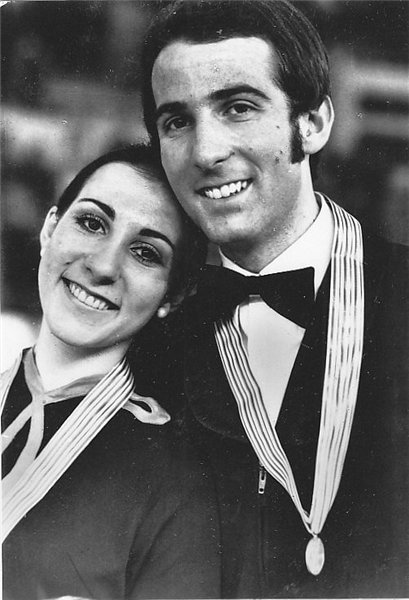 Born May 9, 1950 and January 5, 1949, Angelika and Erich Buck were the children of a business equipment manufacturer. They grew up in Weingarten (Württemberg) in West Germany's Ravensburg district and starting skating in 1958. While attending high school, the young skaters showed great promise. They made their international debut as an ice dance team representing ERV Ravensburg in April 1964, finishing third at Grand Prix de Villars behind Gabriele Rauch and Rudi Matysik and France's Brigitte Martin and Francis Gamichon and went on to finish fourth of six teams competing at the West German Championships that year. Moving up to second at the West German Championships in 1966, they debuted at the European Championships in thirteenth and finished fifth of nine couples at an international ice dance competition in Garmisch-Partenkirchen. Slowly moving up the ranks, in 1967 they moved into the top ten at the World Championships in Vienna, Austria. 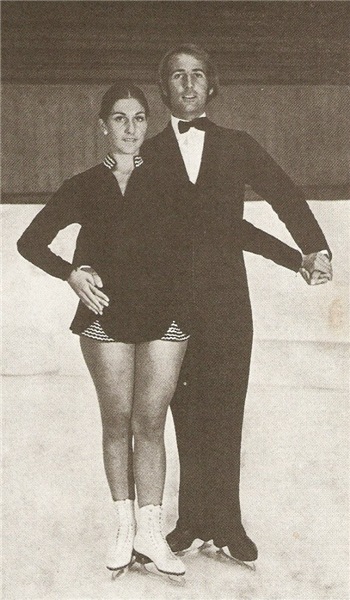 By 1968, both Angelika and Erich had graduated from high school and it was clear that in order for them to move up the ladder, they needed to expand their horizons. Although the West German training base of Oberstdorf and the Olympic Ice Stadium in Munich were their home training bases for much of their careers, they made the trip to Richmond, England to start working with coach Betty Callaway - a move that paid off in dividends. In 1968, they won their first West German title and moved up to sixth at the European Championships and eighth at the World Championships. The following season, they defended their national title and moved up to fourth and fifth at Europeans and Worlds. It was clear to many in the international skating community that this sibling team were, under Betty Callaway's tutelage, quick learners that were going places. They weren't just quick learners on the ice either: both pursued university educations, Erich in business administration at the University of Munich and Angelika sports education at the University of Munich and medicine in Heidelberg. 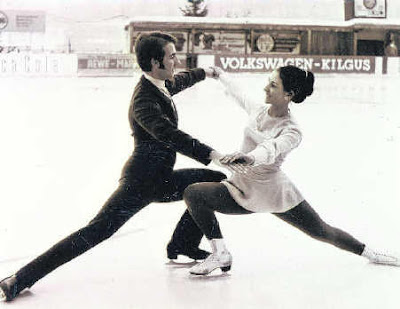 After winning their third West German title in 1970, Angelika and Erich faced criticism from Tamara Moskvina at the 1970 European Championships at the Yublieney Sports Stadium in St. Petersburg for their stiffness, but finished a strong second to Soviets Lyudmila Pakhomova and Alexander Gorshkov. At the 1970 World Championships in Yugoslavia, they finished third in all three compulsory dances (the Westminster Waltz, Rocker Foxtrot and Silver Samba) and neither their lively latin medley OSP or energetic free dance was enough to challenge the Soviet or American teams. They did, however, win West Germany's first medal at the World Championships in ice dance - a bronze - that year. 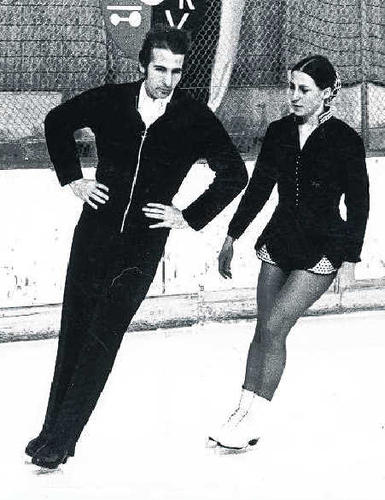 The following season, after claiming their fourth consecutive West German title, Angelika and Erich headed to Switzerland for the European Championships. In her book "Figure Skating History: The Evolution Of Dance On Ice", Lynn Copley-Graves noted that at that event, "Gossip and publicity brought about prejudging in the case of the Bucks. The judges marked them higher than both British teams who, many believed, had programs of equal technical merit but richer in style. The Bucks, however, were well-matched and smooth in their free dance to 'Music of the Mountains' and Kaempfert's 'Swiss Polka.'" However, as would happen at several events in the next couple of years, Angelika and Erich's strengths versus those of Pakhomova and Gorshkov's divided Communist and Western bloc judges. In Switzerland that year, both teams ended with same total of place ordinals and only a 0.4 difference in points, with the Soviets having the edge.

At the 1971 World Championships in Lyon, France, after first two compulsories, Angelika and Erich were tied with Judy Schwomeyer and Jim Sladky with 99.9 judging points. Giving you an idea of how close the top three teams were at that competition, on February 24, 1971, the Associated Press noted, "The first places for the Russians came from the Czechoslovak, Polish, Russian and Hungarian judges on the nine-judge panel. Miss Schwomeyer and Sladky were rated first by the American, British and Canadian judges, and split the first place of the French judge with the Germans The Bucks, of course, got the first place vote of the West German judge." Third after OSP with 252.0 and 23 points, in the free dance, the French judge shifted their support to Pakhomova and Gorshkov and Angelika and Erich got six second place votes. Even though the Americans got more first place votes, the majority of seconds was enough to give Angelika and Erich the silver. 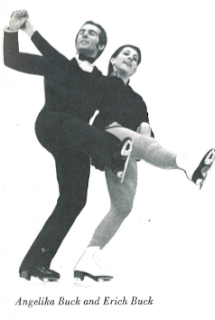 1972 was a breakthrough year for the West German siblings. After winning their fifth consecutive West German title, Angelika and Erich travelled to Gothenburg, Sweden for the European Championships. Taking a three point lead in compulsories and increasing it through the entire event, they did the unthinkable in beating the unbeatable Lyudmila Pakhomova and Alexander Gorshkov. It would prove to be the one and only time in the height of their career that the Soviet team would ever be defeated in international competition and the crazy thing about it all was that it wasn't even particularly close at that particular event. Lynn Copley-Graves noted, "Angelika and Erich Buck had never skated so well. Betty Callaway had guaranteed their content, style and musical interpretation." Despite winning the second of three compulsory dances (the Rhumba) at the 1972 World Championships at the Stampede Corral in Calgary, Angelika and Erich were unable to sustain their momentum with the judges with their samba OSP. Their free dance which helped them win in Gothenburg was actually quite controversial by that era's standards and though exciting, it was heavily criticized for moves that either pushed the rules or were downright illegal and 'too much arm waving'. Although they hung on to the silver, Copley-Graves noted, "The Bucks performed moves aimed to excite the crowd - lifts, a fast-moving broken leg spin, and a death spiral that would count against the Duchesnays a decade and a half later." Many thought Schwomeyer and Sladky should have won silver based on these illegalities. 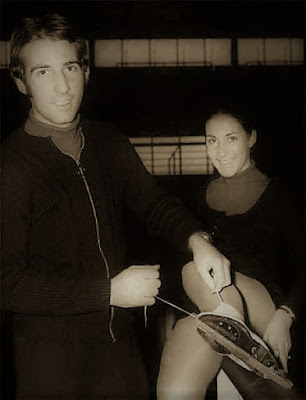 Angelika and Erich's last competitive season came in 1973 and they certainly went out with a bang, debuting their waltz OSP to critical acclaim at the West German Championships. This pattern waltz - The Ravensburger - was designed by them and coach Betty Callaway and would in the later seventies be adopted as a compulsory dance by the ISU. Despite losing their European title in Cologne to Pakhomova and Gorshkov, they travelled to the World Championships in Bratislava with confidence. After average compulsories that left them in second, Lynn Copley-Graves noted, "The Bucks redeemed themselves with the highlight of the entire 1973 Dance Championship, their waltz OSP. Those who had not attended the West German Nationals or Europeans were in for a treat. The Ravensburger Waltz they and Betty Callaway had devised attracted attention on the first viewing. This flowing, expressive, graceful composition in Viennese waltz character was one of those dances that said 'WALTZ' even without the music. Right down to the pattern and the underarm turns, their deep edges, and the recognizable dance positions, this dance epitomized what the judges should have been looking for in the OSP concept. Four did, including the U.S. judge. The other five, like good robots following the European placements, put Pakhomova/Gorshkov first in the OSP for skating a lively, interesting dance devoid of waltz characteristics." A fall from Angelika in the free dance dashed any remote chance of them staging an unlikely come-from-behind win. 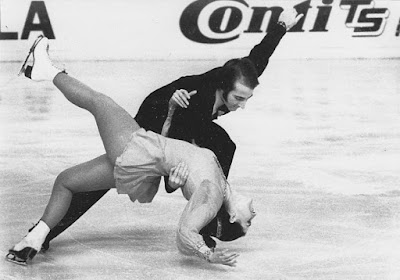 German skating historian Matthias Hampe summarized Angelika and Erich's contributions to the evolution of ice dance thusly: "The Bucks integrated fluidly executed pair elements into ice dancing. With this step, they broke with restrictions and gave ice dancing a new, relaxed character! The free dance of the Bucks [had] amazing special effect elements (transitions) like a side-by-side sit spin with broken leg. The trade mark and invention of the Bucks was the so-called 'Korkenzieher' (corkscrew) or like Erich said, 'Ravensburger Durchrutscher' - a hand hold travelling sit spin with broken leg of the lady with three turns. Another one was a kind of death spiral with her left foot on his boot laying her body parallel to the ice. It was a forerunner of hydroblading [and was] really great! They were the door opener for Torvill and Dean years later." 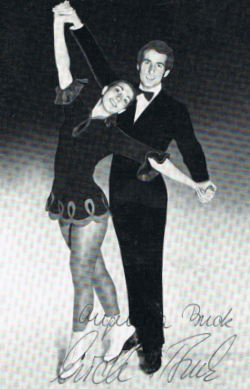 Retiring from competition with four European and World medals apiece to their credit, Angelika and Erich were honoured with the Silver Laurel Leaf Award and signed a contract in late 1973 to tour for a few months with a West German ice theater troupe, making their debut in Wiesbaden on January 8, 1974. After finishing her post-secondary education, Angelika married Günter Hanke in 1974, had two daughters, taught yoga and pilates and earned a degree in neurolinguistic programming. Erich studied economics in Munich, married five time Swiss Champion Charlotte Walter in 1977 and had a son and daughter. Since the seventies, Erich has run the German insurance company Versicherungsbüro Buck. 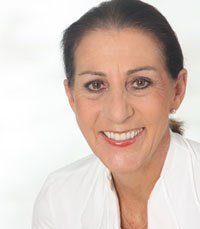 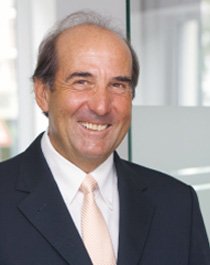 Although I'm admittedly pretty enamoured with the skating of the late Lyudmila Pakhomova, there's actually a pretty fair argument to be made that the Buck's were a more balanced team in terms of the abilities of both partners. It's a shame that this team is consistently overlooked in the historical skating conversation. There's really no good reason why. They beat Pakhomova and Gorshkov, won four World medals,  invented a compulsory dance and actually struck quite a balance between the more flamboyant style of the Soviets and the more rigid style of the Brits and to this day, they are still the only ice dance team from Germany to ever win a European title. It's time they got their due.

Skate Guard is a blog dedicated to preserving the rich, colourful and fascinating history of figure skating and archives hundreds of compelling features and interviews in a searchable format for readers worldwide. Though there never has been nor will there be a charge for access to these resources, you taking the time to 'like' on the blog's Facebook page at http://www.facebook.com/SkateGuard would be so very much appreciated. Already 'liking'? Consider sharing this feature for others via social media. It would make all the difference in the blog reaching a wider audience. Have a question or comment regarding anything you have read here or have a suggestion for a topic related to figure skating history you would like to see covered? I'd love to hear from you! Learn the many ways you can reach out at http://skateguard1.blogspot.ca/p/contact.html.
Posted by Skate Guard Blog at December 19, 2017
Email ThisBlogThis!Share to TwitterShare to FacebookShare to Pinterest
Newer Post Older Post Home