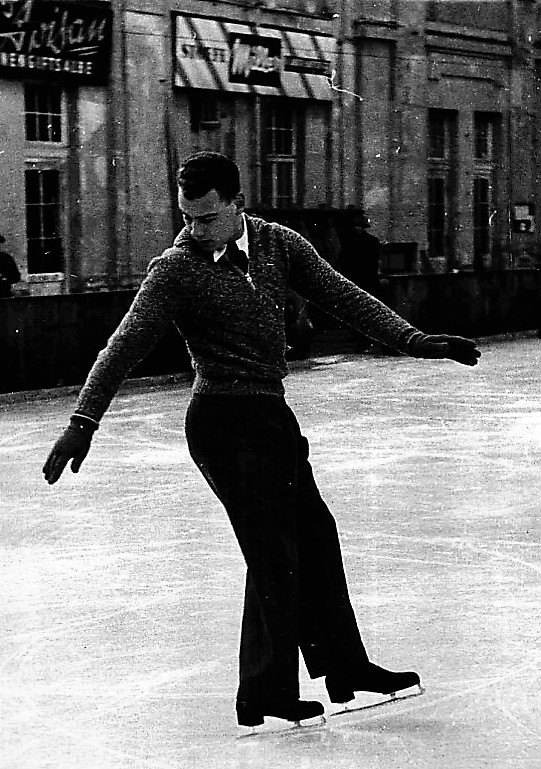 Photo courtesy Bildarchiv Austria
Born June 25, 1929 in Vienna, Austria, Hellmut Seibt first took up skating at the age of four after a doctor suggested some outdoor exercise as a recuperative measure after a bout with pneumonia. The youngster was carted off to the Engelmann rink by his parents. Soon, he caught the attention of Angela Hanka, Rudolf Kutzer and then reigning Olympic and World Champion Karl Schäfer. His training was directly hampered by World War II when Eduard Engelmann Jr.'s rink was badly damaged by allied bombings. Adding injury to insult, a training mate named Karl Jungbauer was killed in the War. However, the teenager stuck with the sport, taking to the ice at the Wiener Eislaufverein whenever possible until the Engelmann rink was repaired. The January 1, 1945 issue of the "Wiener Feldpost" described him as "an unusual talent".


In January 1946, this "unusual talent" made his debut at the Austrian Championships held at the Wiener Eislaufverein. Though he finished only fourth of the six men who competed that year - well behind Edi Rada - it was clear to many that he was a skater going places. Hellmut began training with Inge Lind-Solar and in 1948 at eighteen years of age competed in both singles and pairs (with Susi Giebisch) at the 1948 Winter Olympic Games in St. Moritz. Having placed higher in singles than in pairs at the 'big three' - the Olympics, World and European Championships - that year, he made the decision to end his partnership with Giebisch and focus entirely on singles skating. 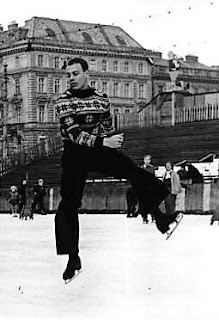 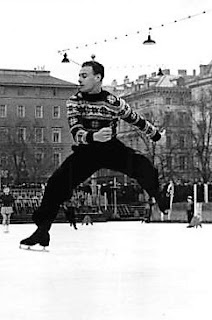 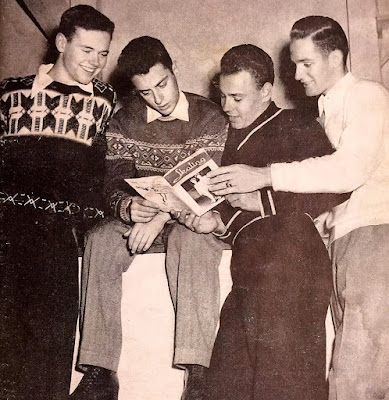 Hellmut's silver medal win in Oslo behind Dick Button would not have been possible without his strong result in the school figures. He was only fifth in free skating and actually had fewer points than bronze medallist Jimmy Grogan. He defeated him only by having one fewer ordinal placing... and not without controversy. Suzanne Morrow-Francis later alleged that her mother, who was Canada's team leader at the Games, was approached by an Austrian official who said that if the Canadian judge helped Hellmut win the silver, Suzanne would win the silver medal in the women's event. Suzanne and her mother refused to participate in the deal and informed Canadian judge Norman Gregory of the situation. He refused to act on their complaint unless a third-party witness was produced and nothing came of it. There's no denying that Hellmut was well-known as a specialist in school figures, but his free skating was said by some to be at times uninspired. At the 1952 European Championships in Vienna, which he won, Finnish judge Walter Jakobsson had him in a tie for sixth in the free skating with Carlo Fassi, who won the silver medal. 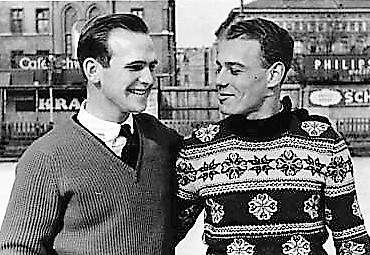 After a disappointing fourth place finish at the 1952 World Championships in Paris, Hellmut turned professional and joined the Wiener Eisrevue, with whom he performed for three years. Reuniting with his former pairs partner Susi Giebisch, he was featured prominently in the show, alongside Fernand Leemans, Emmy Puzinger, Hans Leiter and Jiřina Nekolová. In 1956, he married fellow skater Inge Regner. The couple embarked on a highly successful career coaching side-by-side, much like the Fassi's. His Austrian students included Hanna Eigel, Regine Heitzer, Trixi Schuba, Peter Jonas and Günter Anderl. 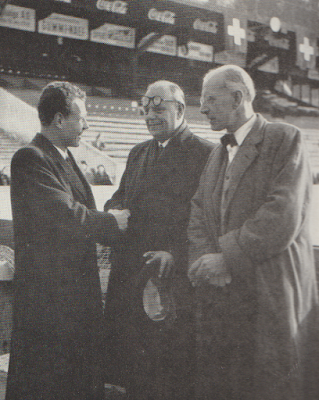 Hellmut Seibt with Richmond Ice Rink's manager A.V. Hopkins and Philip B. Davidson of John Wilson Skates in 1951. Photo courtesy "Skating World" magazine.
The Seibt's moved to Düsseldorf in the early sixties, where Hellmut worked with Dagmar Lurz, Ralph Borghardt and Uschi Keszler. While in West Germany, he played an intregral role in organizing the 1964 World Championships in Dortmund. The Austrian power couple left West Germany in 1967 to coach the Italian national team in Milan. Under Hellmut's tutelage, Rita Trapanese rose through the ranks to medal at both the 1971 and 1972 European Championships in Zürich and Gothenburg.

Coming full circle, the Seibt's returned to Austria in the seventies, where Hellmut served as the coach of Austria's national team until his death on July 21, 1992 at the age of sixty three. After his death, the Hellmut Seibt Memorial was organized in his memory, originally as part of the European Criterium series. Past winners in various age categories and levels have included Meryl Davis and Charlie White, Keegan Messing, Clemens Jonas, Michal Březina, Miriam Ziegler, Denis Vasiljevs and Denis Ten. Though largely overlooked in comparison to his rivals at the time, Hellmut's contributions to figure skating in no less than three different nations were considerable.

Skate Guard is a blog dedicated to preserving the rich, colourful and fascinating history of figure skating and archives hundreds of compelling features and interviews in a searchable format for readers worldwide. Though there never has been nor will there be a charge for access to these resources, you taking the time to 'like' on the blog's Facebook page at http://www.facebook.com/SkateGuard would be so very much appreciated. Already 'liking'? Consider sharing this feature for others via social media. It would make all the difference in the blog reaching a wider audience. Have a question or comment regarding anything you have read here or have a suggestion for a topic related to figure skating history you would like to see covered? I'd love to hear from you! Learn the many ways you can reach out at http://skateguard1.blogspot.ca/p/contact.html.
Posted by Skate Guard Blog at February 22, 2018
Email ThisBlogThis!Share to TwitterShare to FacebookShare to Pinterest
Newer Post Older Post Home
"As a rule an author has one or two popular ways of contrasting the past with the present. He can treat the past as lying in comparative doleful ignorance, or he can explain that the past was infinitely superior to the day we live in. Of course, either method is the popular journalism of the moment, and in reality there is no sharp contrast, but a gradual transition which leads the past into the present." - Joel B. Liberman, Skating Club Of New York