A Quick Minute For The Quickstep 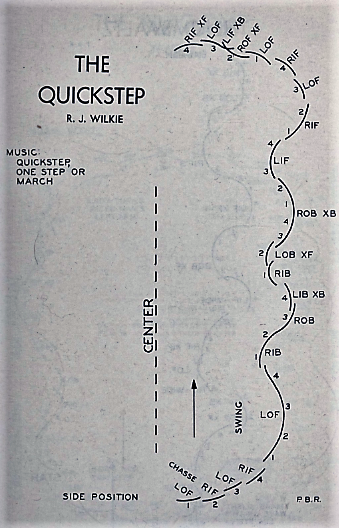 In the height of the roaring twenties, the 'bright young things' of England flocked to halls to sip gin rickeys and dance the charleston. It was during this carefree era that Molly Spain and Frank Ford introduced a combination Quicktime Foxtrot and Charleston dance for two which became known as the Quickstep. The dance gained popularity as quickly as its syncopated steps and by the early thirties, it was a bona fide ballroom dance with its own strict tempo and characteristics.

But how did it become an ice dance? In the summer of 1938, the National Skating Association of England held a two-day dance conference at Queens Ice Rink at Bayswater, London. One of the main topics discussed were the rules for 'new dance competitions', where couples were encouraged to use their ingenuity to come up with new ice dances. The September 1938 issue of "The Skating Times" noted that judges were looking for new dances that met the following requirements:

"1. Does not contain any steps such as would preclude its being generally skated in the usual dance intervals.
2. Has a well-marked rhythm.
3. Is easy to learn.
4. Is always progressive around the rink.
5. Maintains ease of guidance at all times." 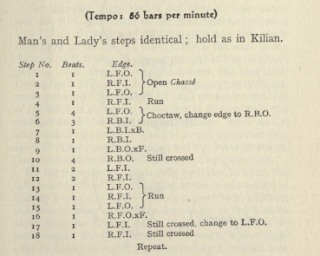 On November 22, 1938, the National Skating Association held a new dance competition at the Westminster Ice Rink in London, which was open to both amateur and professional couples. The judges put a cross on their cards by the dances they wanted to see again. The winning dance - the Argentine Tango - was performed by the only amateurs in the event, Daphne Wallis and Reginald Wilkie. Wallis and Wilkie also demonstrated two other new dances at this event for the first time - the Paso Doble and Quickstep. Though these dances didn't place in the top three, they both received crosses from the judges. Wallis and Wilkie again performed their Quickstep at a similar competition in December of that year. It became an instant hit with British ice dancers and was quickly adopted as a Gold (First-Class) Dance by the National Skating Association.

The Quickstep was first demonstrated in America the following summer at Lake Placid, and by 1940, the Skating Club of New York was including the dance in its triweekly dance sessions. In 1941, the Quickstep was added to the USFSA's new Gold Dance test schedule. It was first tested in the summer of 1941 at Lake Placid and introduced to the USFSA's competition schedule not long after. The ISU was equally enamoured with the Quickstep and included it as a compulsory dance at the 1952 World Championships in Paris, where another British couple - Jean Westwood and Lawrence Demmy - rose to the top of the podium. Interestingly, the dance was first performed at a tempo of forty four beats per minute. By 1950, the tempo was one hundred; by 1980 its current one hundred and twelve. Today, the Quickstep is now almost three times as fast as it originally was!


In his 1951 book "Dancing On Ice", Erik van der Weyden remarked, "The fairly advanced skater should get considerable pleasure from the Quickstep. It is a lively dance, with plenty of go, and a simple yet not too long sequence, requiring a fair amount of skating skill and control, but giving ample opportunity for strong edges. No sense of satisfaction can be derived from dance if not on good edges, but if skated with élan, it has a peculiar sway and character which makes it thrilling to dance, and pleasant to watch."

The Quickstep was introduced as an OSP during the 1984/1985 season. ISU regulations permitted dancers to include toe steps (but not toe jumps) in their dances and specified that couples could stop during their OSP "in ballroom quickstep fashion, so long as the stop did not disrupt the course of movement." When first performed at the St. Ivel International competition at Richmond in September 1984, the winners of the Quickstep OSP were Canadians Tracy Wilson and Rob McCall. They skated their Quickstep to  Lew Pollack's ragtime standard "That's A-Plenty".


The Quickstep continued to be performed as a compulsory dance at the international level throughout the eighties and nineties and returned as an Original Dance rhythm during the 1994/1995 season. It was during this season that Finns Susanna Rahkamo and Petri Kokko debuted their legendary Quickstep to the Claude Bolling's score from the 1970 Jacques Deray gangster film "Borsalino". Their delightful dance became ratified as its own compulsory dance - the Finnstep - in 2008, and became a required sequence in the Short Dances during the 2014 Olympic season.


Most recently, figure skating fans tuned in to "Dancing With The Stars" to watch Tonya Harding dance the Quickstep with an axe and a man in a bear suit in her quest for the Mirrorball Trophy. Gretchen Wilson's "Redneck Woman" may not have been the music Molly Spain and Frank Ford would have envisioned their dance would have been performed to, nor would have Daphne Wallis and Reginald Wilkie known that skating and the quickstep would have such an enduring relationship.

Skate Guard is a blog dedicated to preserving the rich, colourful and fascinating history of figure skating and archives hundreds of compelling features and interviews in a searchable format for readers worldwide. Though there never has been nor will there be a charge for access to these resources, you taking the time to 'like' on the blog's Facebook page at http://www.facebook.com/SkateGuard would be so very much appreciated. Already 'liking'? Consider sharing this feature for others via social media. It would make all the difference in the blog reaching a wider audience. Have a question or comment regarding anything you have read here or have a suggestion for a topic related to figure skating history you would like to see covered? I'd love to hear from you! Learn the many ways you can reach out at http://skateguard1.blogspot.ca/p/contact.html.
Posted by Skate Guard Blog at May 09, 2018
Email ThisBlogThis!Share to TwitterShare to FacebookShare to Pinterest
Newer Post Older Post Home