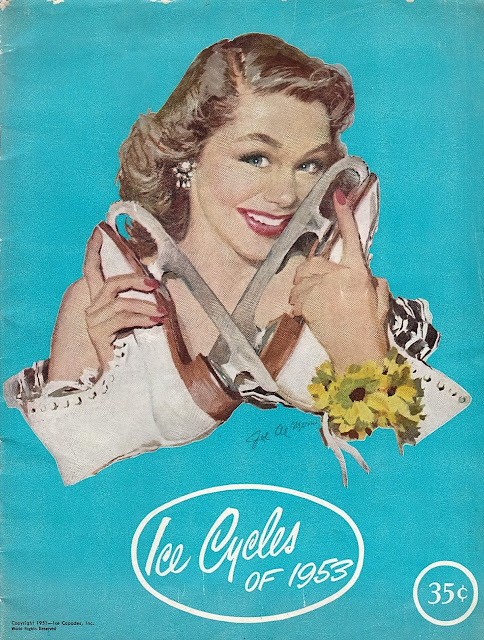 The Ice Cycles tour started with a bang in 1946 as a co-production between the Ice Capades and Ice Follies. Three years later, the Ice Follies bowed out, leaving the show under the ownership of John H. Harris' company International Ice Attractions, Inc.


By the fifties, The Ice Cycles operated primarily in Canada and the northern U.S. but also hit several cities in America's Midwest and West Coast. In short, if the Ice Capades tour didn't stop in a city for whatever reason, the Ice Cycles most likely did. Thanks to a stroke of luck at an antique shop in Great Village, Nova Scotia, I chanced upon a copy of the program of the 1953 tour. I also did a little digging to offer a greater sense of what that year's tour was all about. 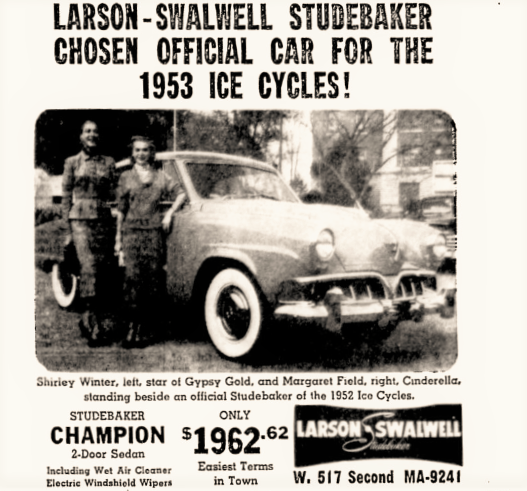 For starters, in most cities that Ice Cycles stopped during the 1953 season, the show played non-stop matinee and evening shows to packed crowds for days at a time. Some of the stops were longer (an eleven day stop at San Diego's Glacier Garden in November 1952) and others longer (a three day stop at the Ottawa Auditorium in April 1953) but on average the show played in each city for a good five days. 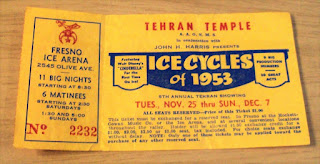 Among the numerous stops were Fresno, Spokane, Portland, Shawinigan, Toledo and Calgary's Stampede Corral. Ticket prices ranged from one to three dollars, with programs going for thirty five cents apiece. The tour travelled with its own musical director, percussionist, organist and conductor and hired orchestras in each city it visited to play as needed. 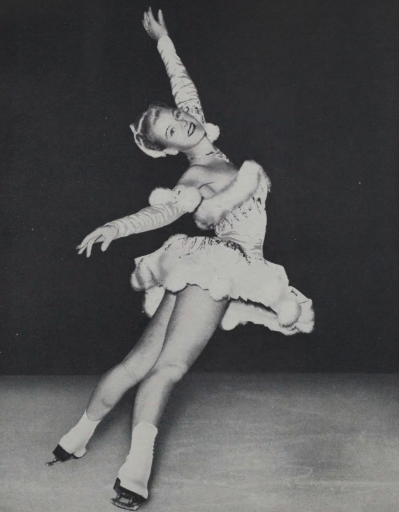 The cast of the Ice Cycles Of 1953 wasn't full of instantly recognizable names but that's not to say some very talented and popular skaters didn't participate. France's Raymonde du Bief made her Ice Cycles debut on the 1953 tour and was perhaps the biggest headliner. Other prominent professional skaters who participated included Margaret Field and Jimmy Lawrence, Chuckie Stein, Shirley Winter, William Knapp, Marjorie Taylor and Ronnie Baker, drag comedienne Willie Kall and the handsome Marshall Garrett. Trixie The Skating Juggler was a huge hit during the first half of the tour but left after Christmas to be replaced by the adagio team of June and Bob Ballard. Charles and Vida Uksila directed the performances and wardrobe and choreography was done by Chester Hale, Rosemary Stewart and Bob Dench. 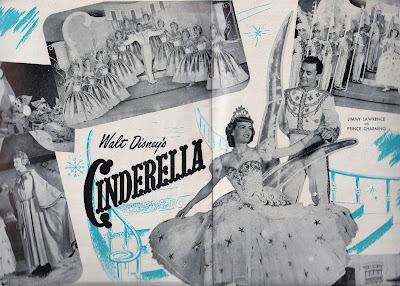 Though hailed as 'nine shows in one', what made the Ice Cycles Of 1953 tour historically significant was that it marked the first time the Walt Disney version of "Cinderella" was staged on ice in North America. This historic 'first' took place through an exclusive arrangement with Walt Disney and understandably played a huge part in why the audiences were so abundant. Keep in mind that at point in the film version that we all know and love had only been out for three years!

The half-hour long skating adaptation of Walt Disney's "Cinderella" condensed the entire story, starring Field and Lawrence as Cinderella and Prince Charming, Shirley Winter as the Evil Stepmother, Terry Derfield and Gayle Winters as Anastasia and Drizella and Priscilla Matson as the Fairy Godmother. The December 11, 1952 issue of the "Spokane Daily Chronicle" noted, "The number is the longest and by far by the best in the show. The costumes and the props in the 'Cinderella' play are breathtaking. One prop, the pumpkin coach, seen only for a few seconds, is valued at several thousand dollars." 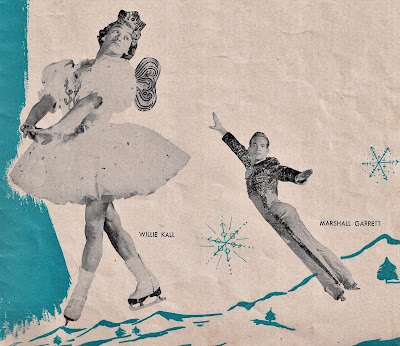 Other prominent acts included "Gypsy Gold", a lavish production number starring du Bief, Knapp and Winter and The Ice Cyclettes and Cycliers; a Christmas act with youngster Chuckie Stein dressed as Santa Claus himself; a Teddy Bear's Picnic and a patriotic number called "State Of The Union" dedicated to those serving in the Korean War. In December when the show was in Spokane, a free, condensed matinee show was given for anyone under the age of sixteen, provided they made a clothing donation to be sent overseas. The December 14, 1952 issue of "The Spokesman-Review" explained that the donations were being accepted so that "a number of youngsters will suffer a little less from the bitter cold of their Oriental winter." This kind gesture was coordinated by John H. Harris and a former Ice Cycles cast member serving in Korea named Lieutenant Roger Russell. 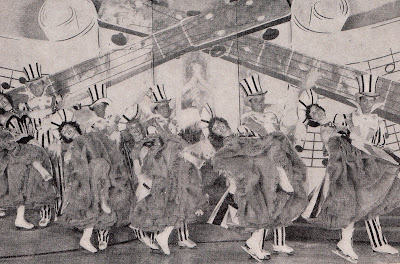 After studying skating's regrettable history of bringing blackface to the ice, I was a little terrified when I saw that the grand finale of the Ice Cycles Of 1953 was called "Minstrel Daze". Thankfully, the powers-that-be on the tour that year had the good sense to completely avoid the horribly offensive and racist fare offered by others who tackled similar themes, instead dressing the skaters like the kind of Southern dandies one might see at Blanche Devereaux's family reunion.

Delightfully campy, with elaborate stage sets, intricate costumes and diverse casts, the touring ice shows like Ice Cycles that enjoyed success throughout the world for decades serve not as relics of a bygone era but as reminders of skating's true entertainment potential.

Skate Guard is a blog dedicated to preserving the rich, colourful and fascinating history of figure skating and archives hundreds of compelling features and interviews in a searchable format for readers worldwide. Though there never has been nor will there be a charge for access to these resources, you taking the time to 'like' on the blog's Facebook page at http://www.facebook.com/SkateGuard would be so very much appreciated. Already 'liking'? Consider sharing this feature for others via social media. It would make all the difference in the blog reaching a wider audience. Have a question or comment regarding anything you have read here or have a suggestion for a topic related to figure skating history you would like to see covered? I'd love to hear from you! Learn the many ways you can reach out at http://skateguard1.blogspot.ca/p/contact.html.
Posted by Skate Guard Blog at May 14, 2018
Email ThisBlogThis!Share to TwitterShare to FacebookShare to Pinterest
Newer Post Older Post Home