Gliding In Glasgow, Part One: The Glasgow Skating Club 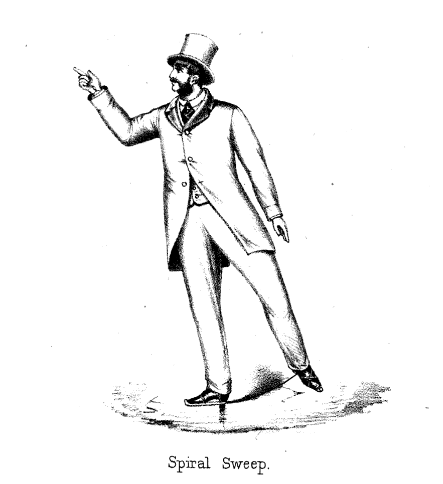 Skating was a popular pastime throughout Scotland in the nineteenth century. From the
Caledonian Canal basin at Clachnaharry to Loch-na-Shanninsh near Inverness, the Scots just couldn't get enough edges! Glasgow residents flocked to the ice at Lochburnie, Hillhead Pond, the Great Northern Pond on Third Avenue South, St. Vincent Crescent, Springbank, Shawfield, Burnside, Rutherglen and Morriston. They even skated on flooded bowling-greens and travelled to Hogganfield, Gartcosh, Lochlomond and Lochwinnoch in pursuit of good ice. Many of the ponds in the city charged a small admission fee, but skates were available to be rented and the ice was supervised by members of a local Humane Society, who were prepared to assist in saving lives if and when the ice froze and skaters took an icy dip.

Long time Glasgow Skating Club President George Anderson, writing in the first edition of his book "The Art Of Skating; with Plain Directions For The Acquirement Of The Most Difficult And Elegant Movements" under the pseudonym Cyclos, wrote: "In Glasgow, there is probably less skating than in any town in the kingdom of near its size; the inhabitants are so much engaged with business all day, and there is so total an absence of idle people, that the ice has only a few devotees. These few, however, form the centre of a very flourishing skating club, who have a pond of their own; and besides this, there are a number of ponds and small lakes within convenient distance of this town, and being situated so far from the sea, they have at least three times as many days of ice in each season, as the Edinburgh men."

George Anderson related that the River Clyde which flows through Glasgow rarely froze and when it did the ice conditions were poor. Town plans from The National Library of Scotland show that for some time the Glasgow Skating Club utilized their own pond off of South Balgray Road very close to the Royal Lunatic Asylum to practice. Curling historian Bob Cowan, who graciously assisted with primary sources for this piece, explained that this pond was only used for a few years before both the Glasgow Skating Club and the Willowbank Curling Club both moved to a pond on the corner of Great Western and Gartnavel Roads in Kelvinside West north of the Asylum's grounds. Mr. Cowan recalled skating there in the sixties, when it was known as Bingham's Pond.

Charles Kirkwood, in his 1884 book "Kirkwood's Dictionary of Glasgow and Vicinity" noted, "The ordinary membership [of the Glasgow Skating Club] is limited to 650... Candidates for admission  must be recommended by two members, and elected by the committee... Children of  members and strangers are also admitted to the pond on special terms." An annual subscription to the club was 10s. 6d. but members could instead choose to pay a life membership for seven pounds and seven shillings.

The club devised its own custom skate with a beech or boxwood sole which matched the size and shape of the boot it was being affixed to which was followed at either end to fit more closely to the foot. These iron skates didn't have the curlicue ends in place of the toe-picks of today's skates that we associate with early Dutch skates. Instead, both ends were rounded off. Anderson believed this particular skate design originated in Glasgow. Glasgow club skates were sold at Hilliard and Chapman on Buchanan Street with prices ranging from 18s. to 25s. depending on the size and choice of fastening. Hilliard later patented a variation of this design and sold it to Harris' Clamp Skates.

Members of the Glasgow Skating Club wore a badge with a flying eagle holding its claws in a skate. Though members didn't take formalized tests, there were three badges distinguishing between the levels of merit of the club's members: copper, silver and silver-gilt respectively. Though the majority of the club's members were men, a limited number of women were permitted membership.

Montagu Monier-Williams claimed that his friend Alexander Sloan wrote despairingly of the club in an 1882 personal letter, citing the arrival of Canadian soldiers who introduced "a small, tricky style of skating" as an example of how the English Style of the time had been degraded by 'fancy skating'. Combined figures still remained de rigueur with three turns, 'shamrocks' and intersecting eights skated in fours around a ball.

In the third edition of "The Art Of Skating" in 1873, George Anderson noted, "Both Glasgow and Edinburgh have shared in the general increase and improvement in skating. The skaters in Glasgow are very numerous, and even conservative Edinburgh begins to doubt if her 'goose' figure is really the only thing worth doing."

Following the short-lived Glasgow Real Ice Skating Palace in 1896 - which we will explore more later - the first 'true' artificial ice rink in Scotland was opened at Crossmyloff, Glasgow by the Scottish Ice Rink Co. in 1907. This rink had an unorthodox design with a bandstand on four pillars in the middle of the ice, which would have posed an obstacle for any figure skater using the rink. However, city magistrates allowed members of the Glasgow Skating Club to use this rink on Sundays. The rink remained open until 1918, later replaced with a larger rink with the same name in 1928, which played host to the Scottish Figure Skating Club. In an interview for the British Ice Hockey Writers website, hockey player Kenny McKie recalled, "It was a dump. Don’t get me wrong, I loved the place and still have many fond memories of playing there, but I won’t beat about the bush, it was a dump."

In the next two parts of this "Gliding In Glasgow" series, we will rewind the tape a little bit and delve deeper into the Glasgow Real Ice Skating Palace and the story of George Anderson a little deeper. Stay tuned... It's pretty fascinating stuff!

Skate Guard is a blog dedicated to preserving the rich, colourful and fascinating history of figure skating and archives hundreds of compelling features and interviews in a searchable format for readers worldwide. Though there never has been nor will there be a charge for access to these resources, you taking the time to 'like' on the blog's Facebook page at http://www.facebook.com/SkateGuard would be so very much appreciated. Already 'liking'? Consider sharing this feature for others via social media. It would make all the difference in the blog reaching a wider audience. Have a question or comment regarding anything you have read here or have a suggestion for a topic related to figure skating history you would like to see covered? I'd love to hear from you! Learn the many ways you can reach out at http://skateguard1.blogspot.ca/p/contact.html.
Posted by Skate Guard Blog at April 09, 2019
Email ThisBlogThis!Share to TwitterShare to FacebookShare to Pinterest
Newer Post Older Post Home