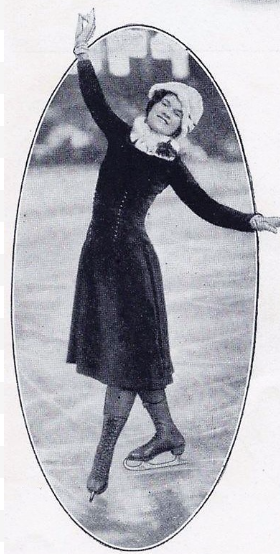 The daughter of Thomas and Margaret (Foley) Loughran, Beatrix 'Bea' Suzetta Loughran was born June 30, 1900 in the New York City suburb of Mount Vernon. Her father died when she was just an infant. Bea's mother was forced to move to a home in the Bronx and raise Bea and her older sisters Margaret and Alice on her own.

Five foot two Bea's outgoing personality and penchant for combining the athletic and artistic was evident even in her youth. As a young woman, she skied in Lake Placid and represented the Women's Swimming Association of New York in diving contests. A love of acting brought her to the stage of the Provincetown Theater. In the play "The Hand Of The Potter", she was cast in a male role. 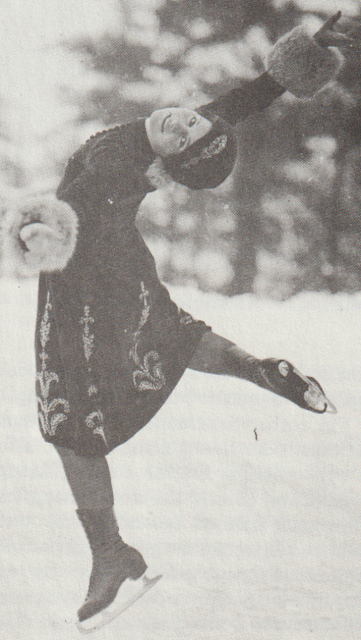 Ultimately Bea's true passion - carving out figure eights at the exclusive Skating Club of New York - began to take up most of her time. She soon moved into the Knights Of Columbus hotel and got a job as a switchboard operator to pay for her figure skating lessons with William Chase at the St. Nicholas Rink. 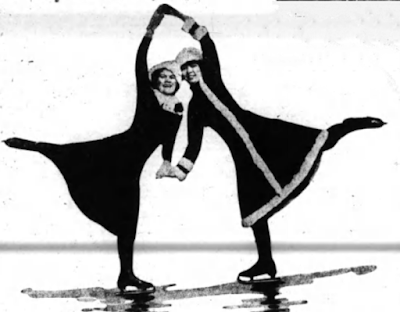 After winning the U.S. junior women's title on her second try in Philadelphia in 1921, Bea finished second to Theresa Weld Blanchard in the senior women's class and teamed up with Edward Howland of Boston to claim the Waltzing championship at the U.S. Championships in Boston the following year. After finishing second to Weld Blanchard again at the 1923 U.S. and North American Championships, she was named to the 1924 Winter Olympic team by International Skating Union Of America officials. New York reporters praised her "verve and dash" and fine spins, but was that enough to compete with Europe's best? 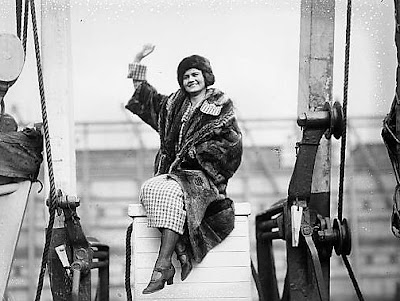 Departing for France on January 2, 1924 with the U.S. speed skating team, the 'hothouse' skater arrived in Chamonix as a favourite to challenge Austria's perennial champion Herma Szabo. In the figures, she presented Szabo with a formidable challenge, but struggled with the high winds and hard, brittle ice during the free skating competition. Nathaniel Niles recalled, "In my opinion Miss Loughran's improvement over her form of a year ago was astonishing. Aside from her loop change loops... her edges were strong and her lobes round, and had Mrs. [Szabo] been much less consistently steady and accurate she would certainly have led the school figures. In free skating she did not nearly do herself justice and doubtless was affected to a great extent by conditions. I thought this at the time but knew it after seeing her exhibition four or five days later at St. Moritz. Her spread eagle was good but her spins, though controlled, were slow and suffered from comparison with the excellence of those done by Mrs. [Szabo] and Miss Henie." 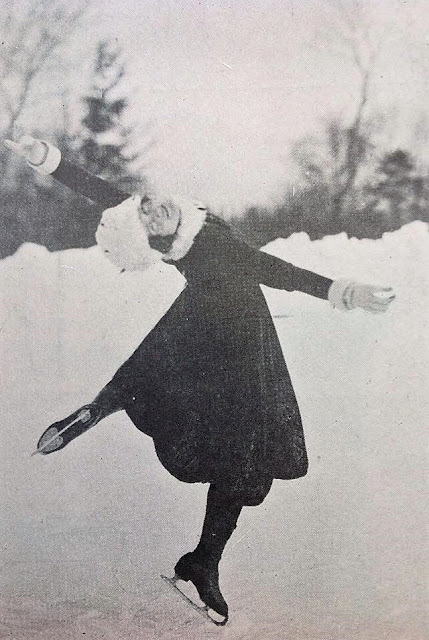 Though Theresa Weld Blanchard had claimed the bronze at the Summer Olympics in 1920, in Chamonix Loughran won the silver, thus becoming the first American woman to win a medal at the Winter Olympic Games. That same winter, she passed the ISU's bronze, silver and gold tests on one day in Lausanne, achieving higher marks on the silver and gold tests than both Andrée (Joly) and Pierre Brunet.

Returning to New York aboard the S.S. Berengaria, Bea was welcomed at Quarantine by the police tug Manhattan. Onboard were International Skating Union Of America and Olympic officials and a full police band. Once home from abroad, Bea aptly predicted in "Skating" magazine that "future aspirants for the world's championship will have to reckon with Sonja Henie of Norway, a child of eleven, already a great performer, who has every gift - personality, form, speed, and nerve." 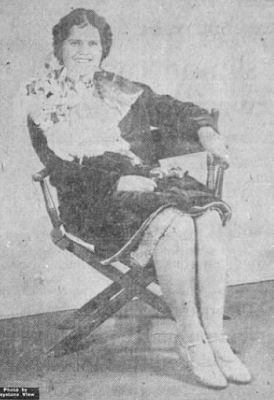 In the subsequent years, Bea firmly established herself as America's top women's figure skater. Between 1925 and 1927, she won three U.S. women's titles and two consecutive North American women's titles, as well as the prestigious Hobbs Trophy. With Ferrier Martin, she won the Skating Club of New York's Waltzing competition and with Newfoundlander Raymond Leslie Harvey she claimed the silver medal in pairs at the U.S. Championships but it was the establishment of a partnership during this period with Sherwin Badger, a Boston skater in New York on business, that would ultimately change the trajectory of her figure skating career. 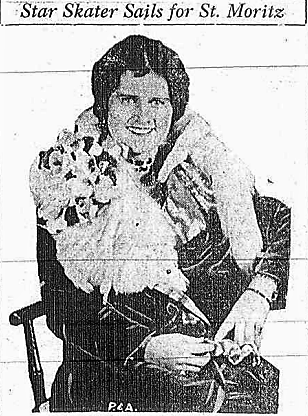 Sailing on the S.S. Majestic, Bea arrived to compete at the 1928 Winter Olympic Games in St. Moritz well aware of the perils of outdoor skating in Europe and true to form, the ice conditions were truly appalling. Forced to manoeuvre around flags that marked bad parts of the ice, she skated commendably in the women's event, actually earning more points than winner and silver medallist Sonja Henie and Fritzi Burger but ending up in third based on the judging system in place at the time which factored in ordinal placings. 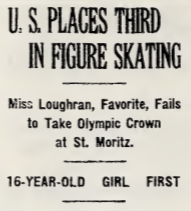 Interestingly, Bea earned one ordinal for each of the top seven places from the seven judges in St. Moritz. Confusion over the point totals versus ordinal placings led a handful of sportswriters to erroneously report that she'd won and rather than take the time to correct the error and educate the public on the judging system, many journalists were more interested in the 'risque' knee-length blue skirt she free skated in. 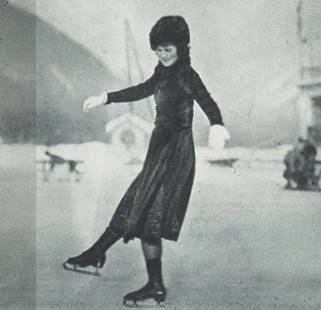 Asked about why she'd chosen to skate in such a "revealing" costume in St. Moritz, Bea shrugged and responded, "I just want to be comfortable." Sherwin Badger and Bea made quite an impression in the pairs event, where they performed one of their signature moves, a pivot movement performed in an upright position where the duo clasped left hands overhead and held each others waists with their right hands. Narrowly lost out on a medal to a pair of Austrian teams, they received marks ranging from first place from the German judge to ninth from the Finnish judge. In her 1940 book "Advanced Figure Skating", Maribel Vinson Owen noted how well-paired Beatrix and Sherwin were: "Beatrix and Sherwin covered the ice... with quite short, staccato steps that gave them a rollicking, bouncing movement that emanated its own special brand of joyousness." 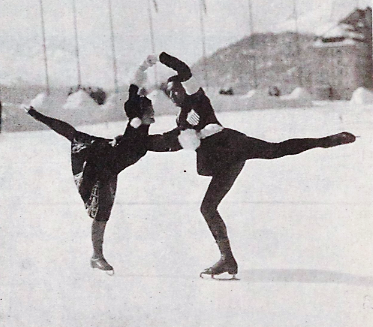 After the 1928 Winter Olympic Games, Bea gave up singles skating to focus entirely on pairs skating with Sherwin, though she did continue to compete in ice dancing contests, notably winning the Fourteenstep at the 1930 Middle Atlantic Championships with Joseph Savage. 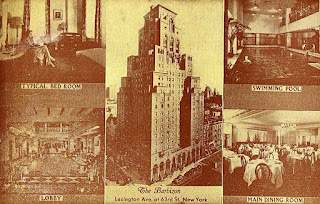 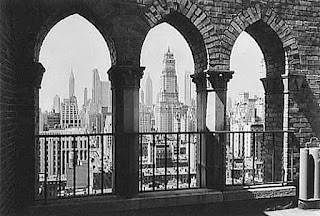 In the late twenties, Bea took up residence at the famous Barbizon Hotel for Women on the Upper East Side of Manhattan, a residential hotel for women known for its strict curfews and 'no men allowed' policy. The Barbizon was known as "the city's elite dollhouse". In the aftermath of the women's suffrage movement's success in gaining American women the right to vote, the Barbizon played host to many famous actresses, flappers and fabulous writers. Even famed Titanic survivor Margaret 'The Unsinkable Molly' Brown lived there. For a free-thinking, modern woman of the roaring twenties like Bea, it was 'the' place to be. 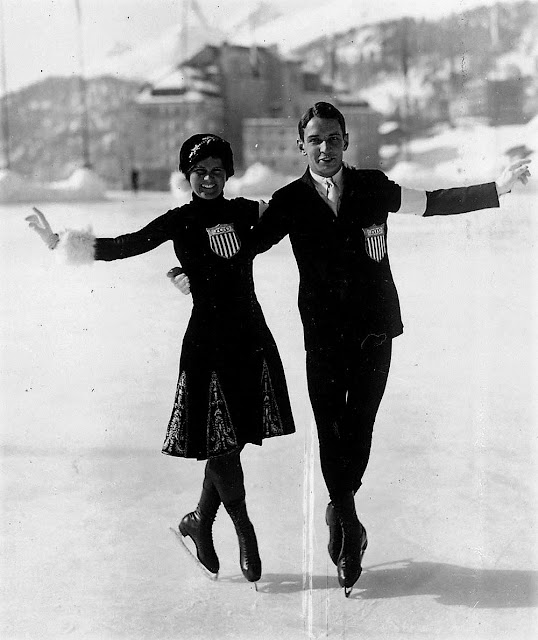 By the time of the big stock market crash of 1929, Bea was moonlighting as a golfer in the summers at the Coldstream Club. One of her many wins on the golf course was at the Westchester-Fairfield Women's Golf Association's invitational golf tournament in 1930. The plucky women's reporter who covered her successes on the green for "The New York Times"? Why, who else but Maribel Vinson Owen. 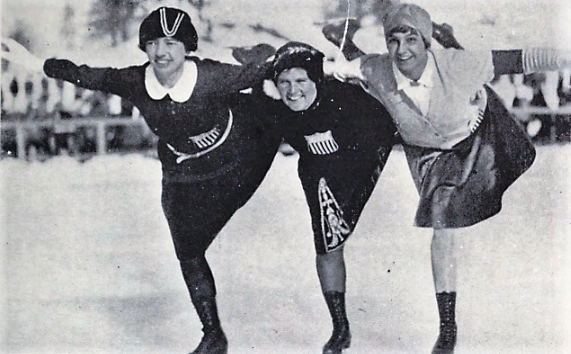 By the time the 1932 Winter Olympic Games in Lake Placid rolled around, hopes were high that Bea and Sherwin would be able to pull off a coup in their home state and defeat the reigning Olympic Gold Medallists Andrée (Joly) and Pierre Brunet. With five thousand spectators anxiously looking on, Bea skated to center ice in a white satin dress trimmed with ermine, black stockings and black gloves with Sherwin by her side. Sportswriter Quentin Reynolds wrote, "The pretty American girl caught the fancy of the crowd at once, and when she and Badger had finished they were greeted with a wild roar of applause. It seems rather difficult to conceive that paired figure skating can be exciting, but as Miss Loughran and Badger floated around the ice, skating slowly or madly, according to the tempo of the music, the audience reacted just as a fight crowd, a baseball crowd or a football audience would react, stimulated by the amazingly fast performance of the pair and impressed by the grace and unity they displayed." Though Bea and Sherwin skated perfectly and the Brunet's faltered, the daring lifts of the French team were rewarded by the judges and Bea and Sherwin settled for silver.

What had to have been especially heartbreaking for her was the fact that just like in St. Moritz, Bea and Sherwin had amassed more points than the gold medallists but again lost the title on the ordinal placings. Ending her career with a bronze medal in the pairs event at the World Championships that followed, Bea held the distinction of being the first American woman in history to win medals in both singles and pairs at both the World Championships and Winter Olympic Games. 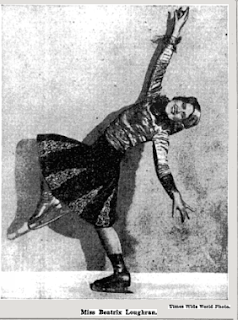 After her retirement from competitive figure skating, Bea continued to give skating exhibitions and compete in golf tournaments until the late thirties. However, her main focus during this period was in coaching her sister Alice's daughter Audrey Peppe, a perennial runner-up at the U.S. Championships in the late thirties. Bea even attended the 1936 Winter Olympic Games in Garmisch-Partenkirchen - her fourth Olympics if you're counting - as Audrey's coach. Had the 1940 Olympic Games not been cancelled by World War II, she would have gone to five as Audrey had been selected to compete at those Games as well.

Bea later turned her attention for a time to judging and as of 1942, she was one of only ten judges in America to be approved by the USFSA to judge at the World Championship level. On February 28, 1942 in Elkton, Maryland, she married her former pairs partner Raymond Harvey. Her Newfoundland born husband, a Canadian soldier in The Great War, was a merchant with business interests in the Caribbean. He passed away in 1959 in The Bahamas; Bea passed away on December 7, 1975 in Long Beach, New York at the age of seventy five and was inducted posthumously into the U.S. Figure Skating Hall Of Fame in 1997.