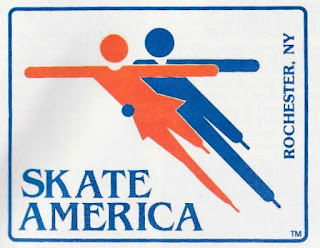 An Australian yacht made history at the America's Cup, when it dethroned the New York Yacht Club, which had held the trophy for over a century. Ronald Reagan was America's President, a postage stamp cost twenty cents and everyone was dancing up a storm to Michael Sembello's hit song "Maniac" from "Flashdance".


The year was 1983 and from October 10 to 16, figure skaters from seventeen nations gathered at the War Memorial Arena in Rochester, New York to compete in Skate America, which was then only a few years old. The event was hosted by the Genesee Figure Skating Club, the home club of former USFSA President F. Ritter Shumway. The venue had been the site of the U.S. Championships twenty four years prior in the heyday of Carol Heiss and David Jenkins. Spectators flocked en masse to get their first glimpse at some of the world's top skaters as they began their season, which (if they were lucky) would culminate in a trip to the 1984 Winter Olympic Games in Sarajevo. 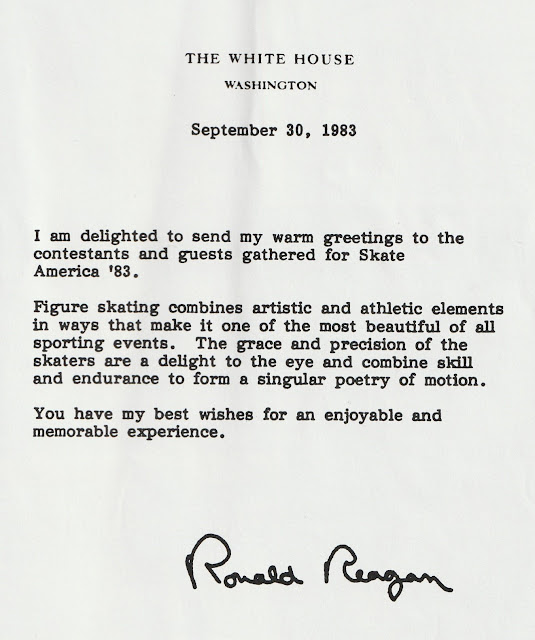 The month prior to the event, a Soviet fighter plane shot down a South Korean airliner with nearly two hundred and seventy passengers aboard. In the aftermath of this dramatic world event, Soviet skaters had withdrawn from the St. Ivel competition in Great Britain. They pulled out of Skate America at the last minute as well. Writing in "Tracings" magazine about the mess, Alexandra Stevenson said, "You never know where you are with the Russians. The Skate America organizers weren't sure that the Soviet skaters would turn up until they received indication that several Russian political bigwigs from Washington wished to attend. After these VIP's had been informed that the USSR hadn't yet accepted the invitation to skate, a telegram came from the Soviets saying that a team would be sent comprised of their third-ranked woman, their fifth-ranked man, an unknown pair and last year's bronze medallist dance team at Skate Canada. Then a few days later they sent this telegram: 'Due to changed preparation schedule of Soviet skaters for 1984 I.S.U. Championships, regret unable to send delegation to Skate America '83. Thank you for invitation, hope for your understanding. Best regards.' It was probably just as well that the Russians decided not to come [to Skate America]. Rochester is the headquarters for Kodak, several of whose staff were lost on the Korean airliner... The public may have booed the Soviet skaters, or worse." George T. Yonekura, the USFSA President at the time, believed the cancellation had more to do with tensions over the jet liner incident than a change in any training program. Quoted in "The New York Times", he said, "I believe there were a couple of Kodak people on that plane and Kodak employs a lot of people around Rochester. Tension would probably be high in Rochester because of that. Frankly, I was relieved when the Russians withdrew. My personal feeling is that there would have been a big problem."

Even without the Cold War drama, Skate America provided for some dramatic showdowns on the ice. Let's take a look back at how things played out!

The absence of the previous year's Skate America Champions, Elena Valova and Oleg Vasiliev, paved the way for a rather easy victory for siblings Kitty and Peter Carruthers. The Americans won both the short program and free skate in convincing fashion on their way to winning their first and only Skate America title.

The Carruthers had missed the event a year prior because Kitty had chicken pox. Their teammates Jill Watson and Burt Lancon were a strong second. Canadians Melinda Kunheygi and Lyndon Johnston moved up from fourth after the short to win the bronze, landing side-by-side double Axels, a throw double Axel and throw triple Salchow in the free. Canada's second pair, Katherina Matousek and Lloyd Eisler, placed fifth behind Gillian Wachsman and Robert Daw.

In his review of the event, Howard Bass recalled, "The injured Susan Garland had the unusual experience of watching her former partner Robert, with whom she won three British national teams, during which time she outgrew him. The petite Gillian is obviously more suited to Robert, as evidenced by their throw triple Salchow, triple twist, and throw triple toe-loop. Robert, though qualifying by residence for the U.S. national team, is ineligible to compete for a second nation in the Olympics, having already represented Britain in Lake Placid." 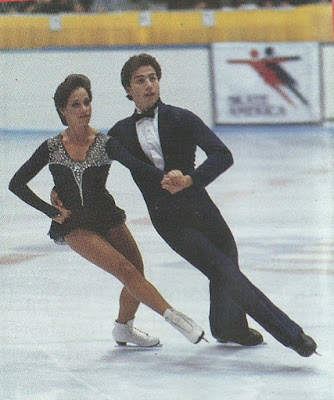 Elisa Spitz and Scott Gregory were the only winners from the 1982 Skate America event to turn up to try and defend their title. Judy Blumberg and Michael Seibert and Karen Barber and Nicky Slater had withdrawn, paving the way for an easy victory for America's number two dance team.

Spitz and Gregory amassed a considerable lead after the compulsory dances (Paso Doble, Rhumba and Westminster) and expanded it in the Paso Doble OSP. Their free dance, a mishmash of tunes including "Down By The Sea", "Paint It Black", "Scres Blues" and "When The Saints Go Marchin' In", offered plenty of speed and variety and went over well with the American crowd. Seven of the nine judges placed them first ahead of Canadians Kelly Johnson and John Thomas, whose free dance was a reimagination of "Faust". Britons Wendy Sessions and Stephen Williams, replacements for Barber and Slater, took the bronze. Canada's second couple, Karen Taylor and Robert Burk, had the misfortune of finishing last after colliding with the boards in the free dance.

Following the event, Howard Bass remarked, "Each of the leading couples [reflected] in their own distinctive ways a current trend towards more 'showy' presentations. It was apparent that dance judges, coaches and competitors alike have decided to turn a Nelsonian eye on some breaches of the rules regarding separations, jumps, lifts, and various other similarities to pair skating, now only half-heartedly curbed." In her book "Figure Skating History: The Evolution Of Dance On Ice", Lynn Copley-Graves suggested that the favourable response toward Jayne Torvill and Christopher Dean's "Barnum" free dance played a role in this trend. 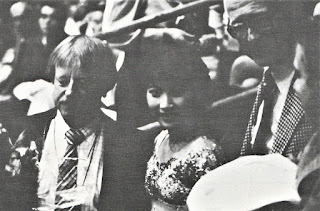 There were fifteen competitors in the women's event in Rochester. Many were surprised when Yugoslavia's Sanda Dubravčić, who'd placed in the top ten at two World Championships in figures, finished behind sixteen year old Tiffany Chin in the event's first phase. After all, ice conditions weren't exactly great... owing partly to an October heat wave. Covering the event for "The Globe And Mail", Beverley Smith recalled, "Outside the War Memorial Arena, where the competition is being held, the temperature was a balmy twenty seven degrees. Inside, however, during the women's compulsory figures, it was hot and muggy and the ice was wet. The figures, which were to start at 7 a.m., were delayed. Two hours later, the sixteen women skaters had completed only one of three compulsories. Rink superintendent Charlie Mason said the air conditioning was turned on at 9 a.m. However, it did not take effect immediately because someone forgot to close all of the outside doors to keep out the heat. The rink was spotty, with wet patches at both ends."

Americans were delighted when Tiffany Chin turned in two outstanding performances in the short program and free skate on the way to winning her first of two Skate America titles. Her winning free skate featured a triple toe-loop, triple Salchow and two double Axel's. Canada's Cynthia Coull landed one more triple than Chin but, hampered by ninth place finishes in both the figures and short, was only able to move up to fifth. The silver and bronze went to Americans Jill Frost and Kelly Webster and Sanda Dubravčić ended up seventh. Canada's second entry, Monica Lipson, was an unlucky thirteenth. It was the first American sweep of the women's event at Skate America - a feat that wouldn't be repeated until 1996, when Michelle Kwan, Tonia Kwiatkowski and Sydne Vogel took the top three spots. 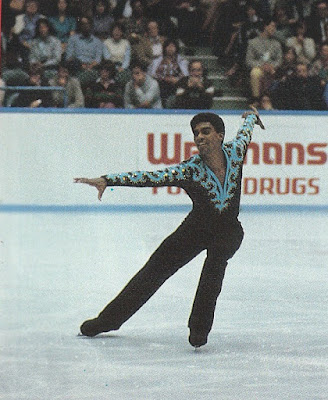 At the 1983 World Championships in Helsinki, Brian Boitano had finished ninth in figures, one spot ahead of West Germany's Rudi Cerne. In Rochester, nineteen year old Boitano handed twenty five year old Cerne yet another defeat on the way to winning his first of two Skate America titles. The fact that Boitano had managed a triple Lutz/double loop combination in the short when almost all of the other men only tried double loop/triple toe-loop or triple toe-loop/double loop had perhaps been the clincher. In the free, Boitano two-footed a triple Axel attempt but landed five other triples, an effort matched by Japan's Masaru Ogawa, who finished second in the free but fourth overall because of his eighth place finish in figures. The bronze medallist, America's Bobby Beauchamp, made history as the first skater of colour to win a medal at Skate America. Canada's two entries, Gordon Forbes and Kevin Parker, were sixth and eighth.

In the aftermath of the event, CFSA President David Dore had plenty to say about the fact that several 'top flight' U.S. skaters weren't in attendance in Rochester. "We would never send Brian Orser and we would never send Tracy Wilson and Rob McCall. Would you send Wilson and McCall to be beaten by Spitz and Gregory?" And it would happen. I've told this to the people. We don't want them to make mincemeat of our skaters before the whole U.S. nation. I'm not debating the legitimacy of the Americans' finishing one-two-three, but I am debating whether it is healthy for skating to do that. I realize they may have to do it to make ticket sales. I don't know if they would make sales in the United States if they didn't...  If they want to do it for the good of the flag, then I wish they'd just let us know." Dore's comments perhaps hearkened back to old wounds from the days of the North American Championships that perhaps hadn't yet healed.

Skate Guard is a blog dedicated to preserving the rich, colourful and fascinating history of figure skating and archives hundreds of compelling features and interviews in a searchable format for readers worldwide. Though there never has been nor will there be a charge for access to these resources, you taking the time to 'like' the blog's Facebook page at http://www.facebook.com/SkateGuard would be so very much appreciated. Already 'liking'? Consider sharing this feature for others via social media. It would make all the difference in the blog reaching a wider audience. Have a question or comment regarding anything you have read here? Have a suggestion for a topic related to figure skating history you would like to see covered? I'd love to hear from you! Learn the many ways you can reach out at http://skateguard1.blogspot.ca/p/contact.html.
Posted by Skate Guard Blog at October 17, 2019
Email ThisBlogThis!Share to TwitterShare to FacebookShare to Pinterest
Newer Post Older Post Home