Created in 1956 as a branch of the Circus Aeros and originally known as the Aeros-Eisrevue, the Berolina-Eisrevue became thusly known after the name 'Aeros' sparked confusion from audiences confused whether or not they were attending the circus or an ice show. The show, which featured a cast of Czechoslovakian and East German skaters, integrated into the VEB Zentral-Zirkus Berlin in 1961 and toured Europe, setting up portable ice rinks in circus tents. 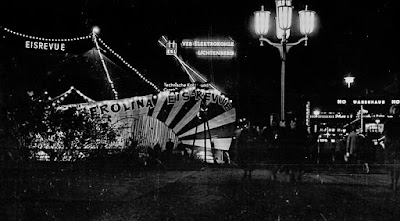 The idea of a touring, circus style ice show was nothing new to German audiences at the time. In the late forties, British impresario Tom Arnold had established a similar touring company in West Germany. Not long after the show began, one of his employees, Hanns Thelen, left the company. Taking several of the show's skaters with him, Mr. Thelen established the Scala Eisrevue of 1951. Jacqueline du Bief recalled, "At a time in when more than half Germany lived in camps, caravans and reception centres, and when most of the streets were in ruins, it would have been ridiculous to look for buildings in which to perform... In one year, Mr. Thelen equipped and organized his show according to the German circus tradition. Not only was the show performed under canvas, but the artistes lived in caravans. Sets, organization, discipline, and mentality, everything in this show... can be summed up in one word: 'Circus.'" 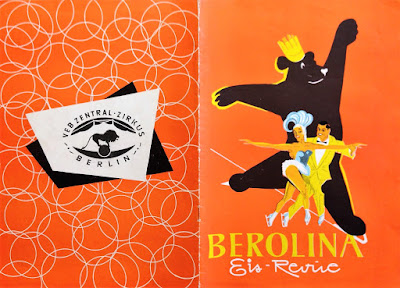 In its early years, the Aeros-Eisrevue featured a more diverse cast of European skaters, but by the early sixties under the Berolina-Eisrevue name, only Czechoslovakian and East German skaters participated. This would have been due to the fact the VEB Zentral-Zirkus was state sponsored and the show's choreographer, Boris (Bohumil) Milec, was Czechoslovakian. Unlike the large scale touring North American shows and British pantomimes of the era, the Aeros and Berolina Eisrevues didn't boast any big headliners whatsoever. Much of the shows consisted of ensemble work, focused more so on showy costumes and sets than excellent skating. In one show, Eastern bloc skaters took audiences in Communist countries 'around the world', offering their interpretations of the cultures of New York, Havana, Cairo and Peking. These skating acts likely gave spectators living behind the Iron Curtain some wild ideas about what life was like in 'exotic' distant lands. 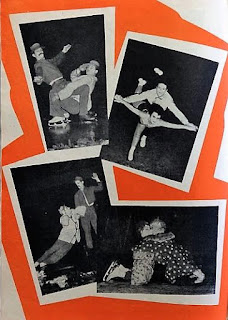 The show disbanded at the end of the 1962 season due to both a lack of suitable professional skaters and the fact the equipment the tour used for mobile ice production was wearing down after almost ten years of constant use. Although we don't often consider the Aeros and Berolina Eisrevues when reflecting upon the touring ice shows of the fifties and sixties, these shows are certainly an interesting footnote to the skating history of that period.

Skate Guard is a blog dedicated to preserving the rich, colourful and fascinating history of figure skating and archives hundreds of compelling features and interviews in a searchable format for readers worldwide. Though there never has been nor will there be a charge for access to these resources, you taking the time to 'like' on the blog's Facebook page at http://www.facebook.com/SkateGuard would be so very much appreciated. Already 'liking'? Consider sharing this feature for others via social media. It would make all the difference in the blog reaching a wider audience. Have a question or comment regarding anything you have read here or have a suggestion for a topic related to figure skating history you would like to see covered? I'd love to hear from you! Learn the many ways you can reach out at http://skateguard1.blogspot.ca/p/contact.html.
Posted by Skate Guard Blog at February 04, 2020
Email ThisBlogThis!Share to TwitterShare to FacebookShare to Pinterest
Newer Post Older Post Home